Stay levelheaded. Keep calm. That was German Interior Minister Thomas de Maizière's message after a mass shooting and two terrorist attacks jolted the country last month. Do not overreact. Make no rash decisions. First wait for the investigations to be completed in Würzburg, Ansbach and Munich.

Two and a half weeks later, de Maizière is back in the same place, on the ground floor of his ministry in Berlin. Behind him is the German eagle, black on a dark blue wall. De Maizière is about to present a raft of proposals that he and his colleagues consider necessary to combat terrorism. "Measures to increase security in Germany," he calls them.

He understands people's concerns, the minister says. That's why the state must do everything in its power. Deporting criminal foreigners must be made easier, he adds. The Facebook pages of refugees who come from countries neighboring Syria must be combed in an effort to trace any Islamic State sympathies. The minister wants to loosen data privacy laws in order to make increased video surveillance possible. That, and a lot more.

De Maizière also uses the word "levelheaded" again, albeit only once. This time, he speaks a lot more about determination. "Security has many aspects," de Maizière says, one of which is "toughness."

But things could be a lot tougher.

A Raft of Measures

Before de Maizière's much-heralded public statement, a so-called "Berlin Declaration," made the rounds among conservative state interior ministers belonging to de Maizière's Christian Democratic Union (CDU) and its Bavarian sister party, the Christian Social Union (CSU). It was originally supposed to be published next Thursday. The six-page paper begins with a turgid quote from Prussian philosopher Wilhelm von Humboldt: "Without security, there is no freedom." This is followed by a list of 27 proposals. More police. More powers for Germany's Bundeswehr armed forces to be deployed domestically. More data retention. A ban on burqas. Sanctions against new arrivals who refuse to integrate, "up to the point of expulsion."

The paper's authors even dusted off an old conservative rallying cry, demanding that rules surrounding dual citizenship be tightened after they were loosenedd by the governments of former Chancellor Gerhard Schröder in 2000 and his successor Angela Merkel in 2014.

Hundreds of thousands of German Turks with passports from both countries are having their loyalties openly questioned by some Christian Democrats. "We suggest that those who want to engage in the politics of foreign governments leave Germany," the paper reads.

Integration, security, the fight against terror, Turkish policy. The lines are blurring.

A year after Merkel's proclamation that "We can do it," there seems to be few traces of last summer's optimism in the conservatives' ranks. Back then, the chancellor was still confident that a "strong Germany" could absorb hundreds of thousands of immigrants and train and integrate them into the country's workforce.

The conservative interior ministers' proposals highlight to what extent fear has become a driving political force in Germany. Citizens fear terrorism and violence, while politicians fear the will of voters.

'A Declaration of Utter Fear'

The two most prominent forces behind the "Berlin Declaration" are men from two states where elections will be held in September. One is the interior minister of Mecklenburg-Western Pomerania, Lorenz Caffier, who compiled the proposals. The other is Frank Henkel, Berlin's senator of the interior, who enthusiastically supported them.

The two are reported to have spent weeks preparing their advance. Caffier and Henkel are the Christian Democrats' top candidates in those two northeastern states, and the far-right populist Alternative for Germany (AfD) party is close on their heels. The AfD is campaigning with slogans like, "Protect citizens better" and "Stop the asylum chaos now!" In both states, the Christian Democrats risk getting pushed out of the government.

In their panic, the two conservative interior ministers have been pandering to peoples' fears, however absurd they may be. For instance, as calls for a burqa ban grow louder, the number of Muslim women who actually wear the full-body covering, at least in Mecklenburg-Western Pomerania, is probably quite low.

Even experts within the security apparatus are bewildered by the smorgasbord of proposals. "The paper reads like a declaration of utter fear of the AfD," says André Schulz from the German Police Union. "Of course we'd be grateful for more personnel. But in many other aspects, it's reasonable to question whether they can really provide more security."

Even Interior Minister de Maizière feels duped. There is talk in his party of a "targeted affront" because some of his state-level counterparts are stealing the show with their haste. Contrary to initial reports, de Maizière did not sign off on the first version of the "Berlin Declaration."

De Maizière deems a veil ban unconstitutional. "You can't ban everything you don't agree with," de Maizière says. In addition, his party will not attempt to abolish dual citizenships -- that would violate the treaty the Christian Democrats have with their coalition partners, the Social Democrats (SPD). For the latter, a reform of Germany's citizenship laws was one of the major modernization projects of the past 20 years.

Those were the two points that the SPD had honed in on over the last week. Rolf Jäger, the interior minister of Germany's most populous state, North Rhine-Westphalia, spoke of a "crude pandering to rightist clientele." The floor leader for the SPD in the German parliament, Thomas Oppermann, called them a "desperate attempt to show a conservative profile," saying the paper contained "almost exclusively measures from the discard pile of domestic security. The conservative state ministers had "overshot their target," Oppermann added. The leader of the Social Democrats and Germany's vice chancellor, Sigmar Gabriel, left no room for doubt that an abolishment of dual citizenship would not be possible as long as his party was in the government.

One thing is certain: The final version of the "Berlin Declaration" will contain a number of revisions by the time it's formally adopted by the conservative interior ministers on August 18. Drafts are already making the rounds in which certain passages have been completely stricken from the paper, most notably the one about abolishing double citizenship.

But postponing something is not the same as abandoning it completely. In conservative circles, some are weighing whether to keep those proposals warm for next year's election campaign. The images of supporters of Turkish President Recep Tayyip Erdogan waving flags in Cologne in recent days left many Christian Democrats fuming. Some in the party believe this could be used to score points among voters. "This issue hits a nerve," one party representative said.

Stay levelheaded? Keep calm? In this summer of angst, few are still capable of that.

Now? In recent months, German security laws have already been tightened and additional restrictions have been added to asylum laws. Even government representatives admit that the moves were "pretty tough."

Reforms that went into effect in March make it easier to deport foreigners if they are convicted of crimes. Politicians made the change in response to the sexual attacks in Cologne on New Year's Eve. And just before the summer recess, the Christian Democrat and Social Democrat-led government coalition also pushed through new anti-terror legislation enabling the country's domestic intelligence agency, the Office for the Protection of the Constitution, to conduct surveillance against people as young as 14 and to share data with all EU and NATO countries. In the future, the German Federal Police and the Federal Criminal Police Office will be permitted to deploy undercover agents to respond to potential threats.

Following the mass shootings and attacks of recent weeks, Chancellor Merkel ultimately presented a "Nine-Point Plan" that offers an A to Z package of responses, ranging from deportations to increased cooperation with foreign intelligence services. None of the nine points is entirely new, but they are now to be pursued with much greater energy. They include provisions making it easier for the German armed forces to be deployed domestically -- a step that Defense Minister Ursula von der Leyen is hoping to use to chalk up political points.

Meanwhile, CSU leaders are calling for electronic ankle bracelets to be placed on potential attackers. The Bavarian state interior minister, Joachim Herrmann, also said there can no longer be "any taboos" when it comes to deporting refugees to crisis regions.

It's getting difficult to keep track of all the demands being made.

This week, Interior Minister de Maizière drew criticism with a proposal that came across like a half-baked idea. Even before he presented his 16-page list, news leaked that he wanted to loosen doctor-patient secrecy laws in order to enable early detection of possible attacks.

The proposal prompted criticism not only from doctors, but also from one of his allies within his own party, German Health Minister Hermann Gröhe, who had been on a trip to the United States. De Maizière had apparently not run his ideas by the Health Ministry. Gröhe's ministry promptly reported that doctors are already permitted to contact the authorities if they have any information about a possible terror threat -- if, for example, a potential terrorist or mass shooter hints at such an attack during a therapy session. The ministry warned that any move to further tighten laws might keep a potential attacker from seeking therapy in the first place.

Frank Ulrich Montgomery, the president of the German Medical Association, intervened the same day the news got leaked. In response, the interior minister publicly stated that he had no intention of eliminating doctor-patient confidentiality rules. He said he would seek a dialogue with doctors about "reducing the threat to people to the greatest degree possible."

"There must be a response to the feelings of insecurity among the populace," says Jürgen Falter, a professor of political science at the University of Mainz. But in order "to maintain credibility, politicians need to speak with a single voice." That's not happening though, he says. Many of the latest proposals are coming from individuals within the Christian Democrats and haven't been agreed to within the party or with its coalition partner, the SPD, or even clearly thought out. That's not how you convince voters, says Falter.

'Not How You Create More Security'

The cacophony of voices around the issue of security is also upsetting some within conservative circles. Sources within the Christian Democrats say that if the goal had been to provide a show of strength in the run-up to elections in Berlin and the state of Mecklenburg-Western Pomerania, then the party has failed. "First a packet of anti-terror laws, then a nine-point plan, now a 'Berlin Statement,' and then de Maizière on top of it all -- this is not exactly how you create more security," the source says.

Burkhard Hirsch, the former interior minister for the state of North Rhine-Westphalia, describes it as a "hapless attempt to signalize to voters that we're not inactive." The security agencies' powers have been expanded in unprecedented ways in recent years, he adds, with Germany's Constitutional Court having to step in more than a dozen different times because the government went too far. "If this kind of agitation continues, then we will jeopardize the liberal way in which we live," says Hirsch, who belongs to the libertarian-leaning Free Democratic Party.

Domestic security has always been one of the conservatives' key issues. But now it could be said: Fear eats the soul. 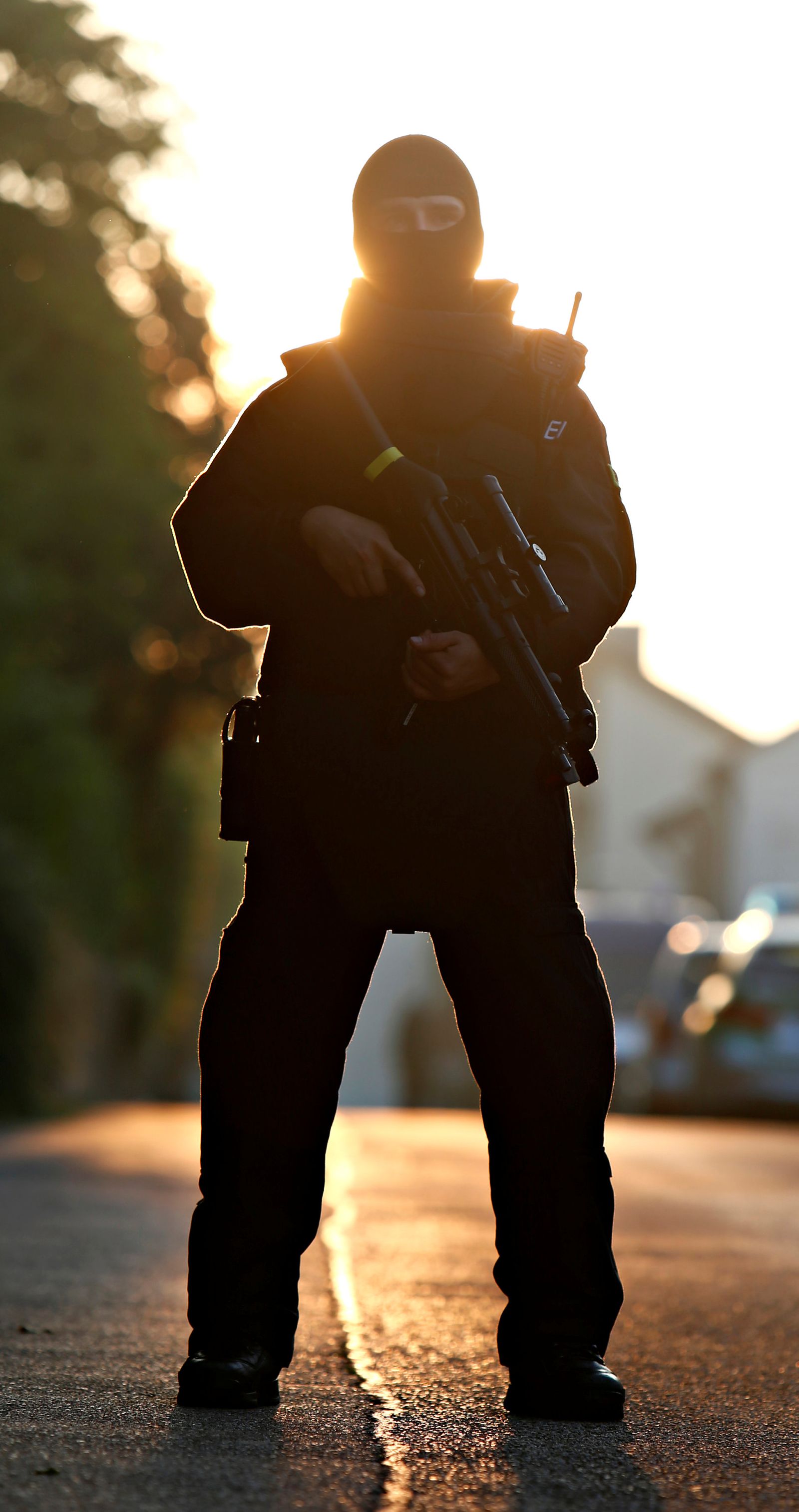 A special police force officer in Ansbach: Fear has become the driving political force in Germany after attacks. 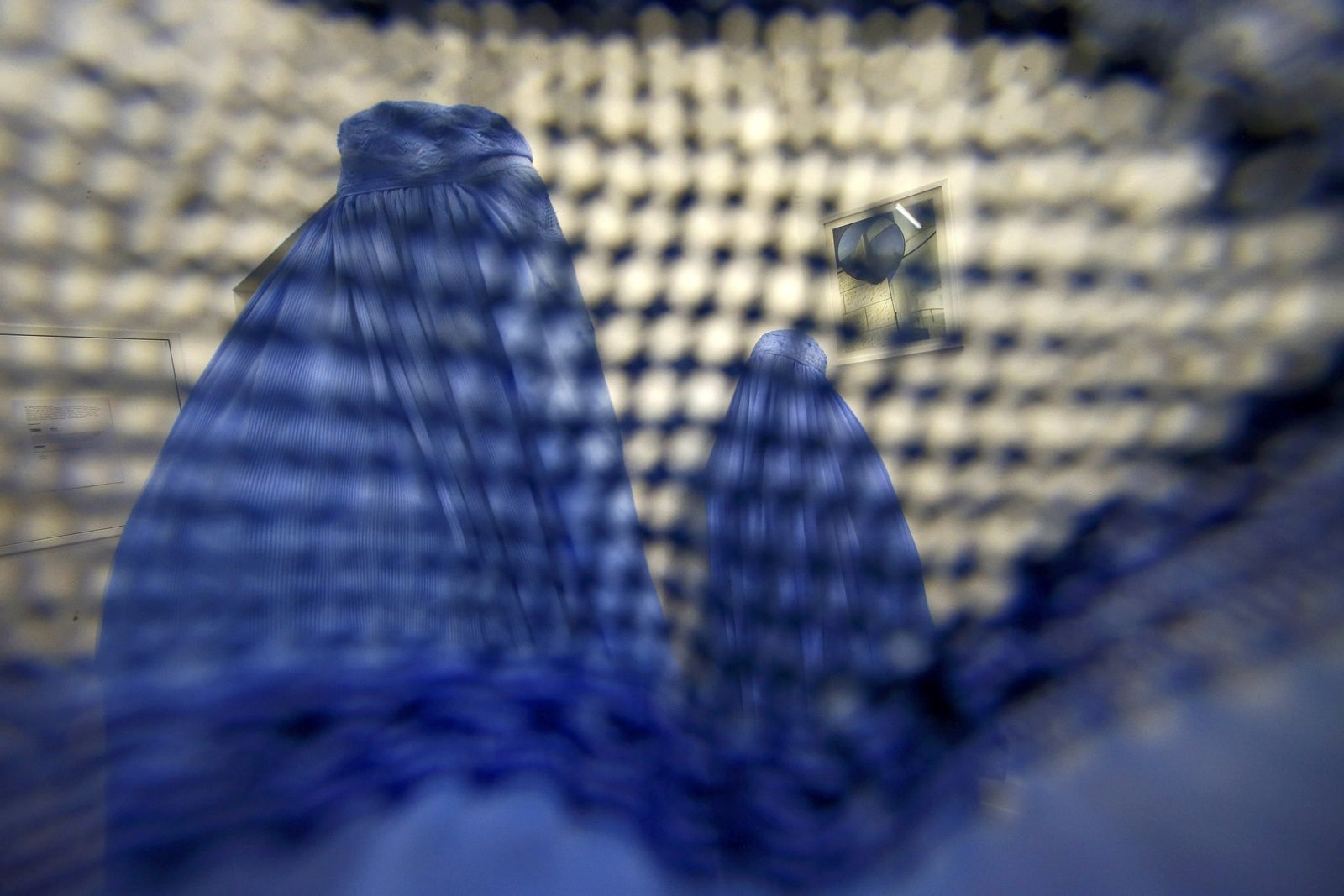 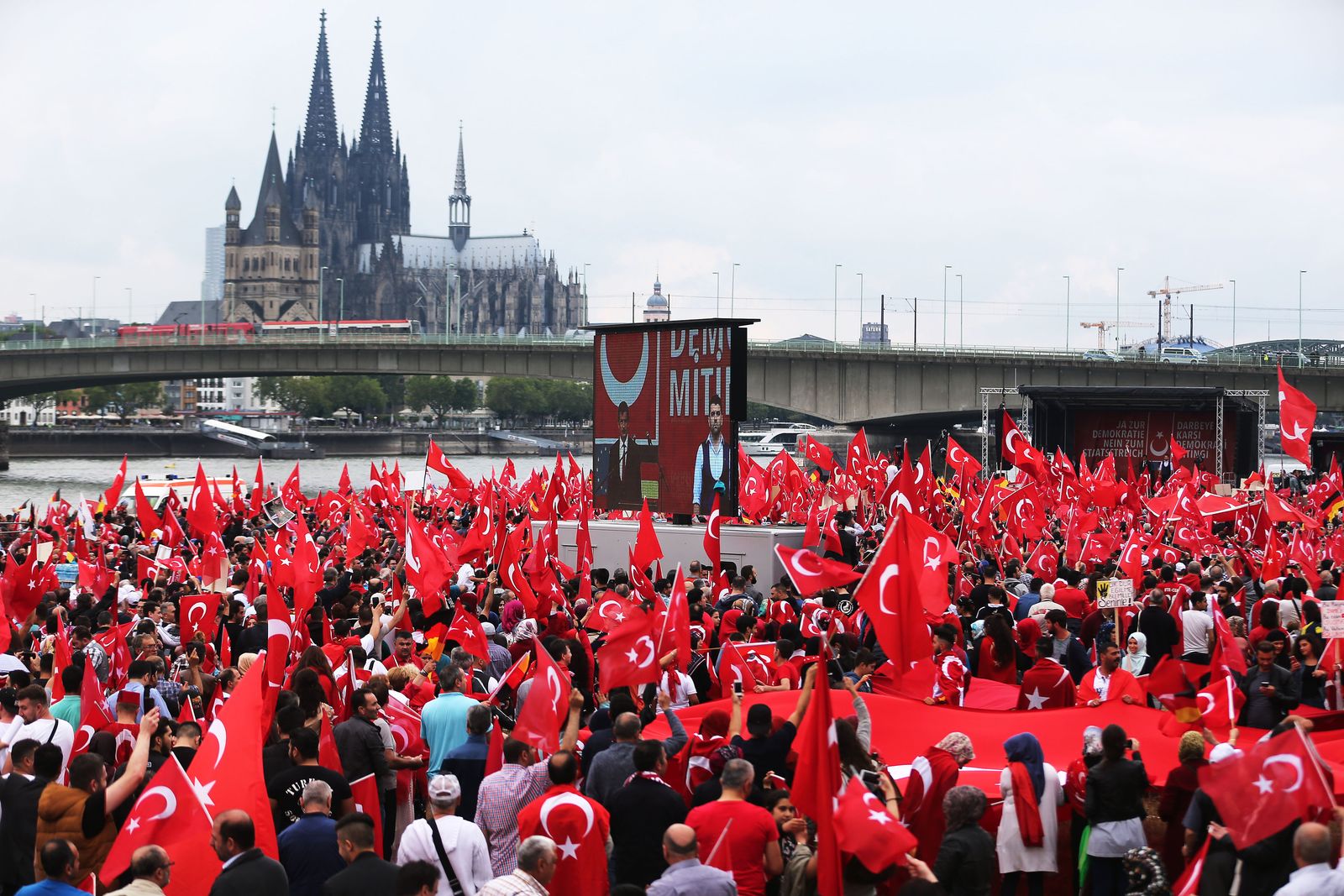 Supporters of Erdogan at a demonstration in Cologne on July 31 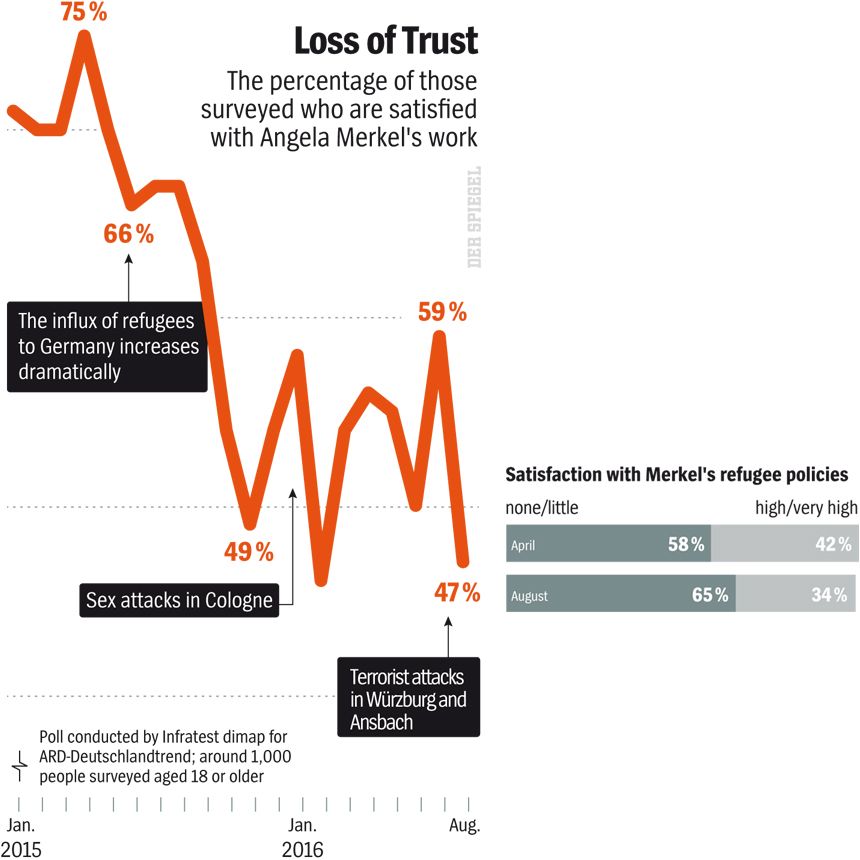