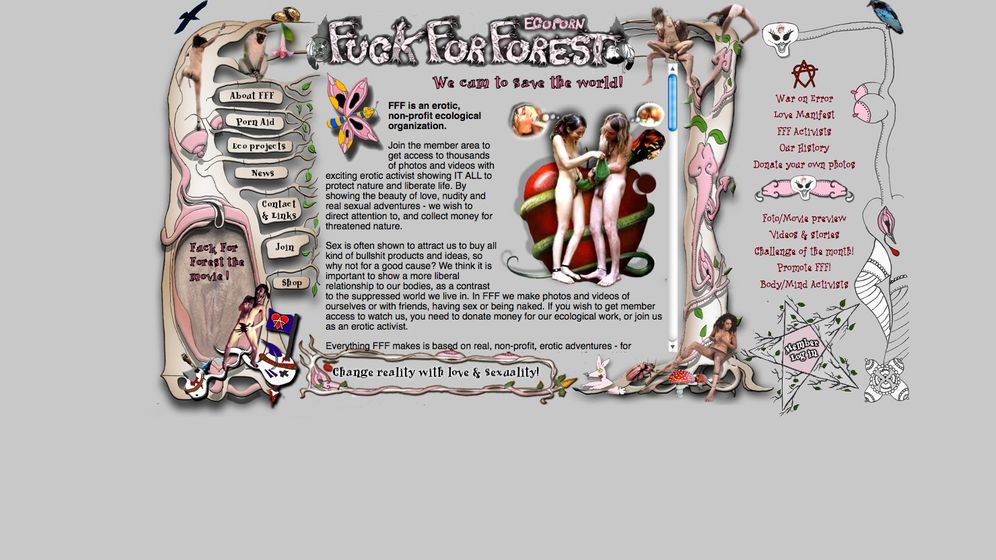 The activists have been living in the Berlin district of Friedrichshain for the past seven years. First, there were three of them: Tommy from Norway, Leona from Sweden and a German woman named Natty. Later, they were joined by Dan, from Norway, and Kaajal, a woman from India. They collect their clothing and food from dumpsters and think that drugs are a waste of time. "We're looking for people who enjoy sex and nakedness," they say. Their lives are disjointed, their apartment is a mess, their sex is a free-for-all -- and they call it freedom.

These are neo-hippies, and they resemble rare plants. They can't sing, but they do it anyway. They can't juggle numbers, but they are collecting money to help save the rainforests. They claim to have already raised over €400,000 ($530,000). Tommy, Leona and the others run a website for eco-porn where, for a fee, members can watch people having sex in the woods.

The group calls itself "Fuck For Forest" (FFF), and Polish director Michal Marczak naturally chose the same name for his recently released documentary, for which he accompanied them for a couple months with camera in hand. Marczak's film, which is showing at cinemas in Germany, is an unusual portrayal of Berlin -- and an absurd and comical masterpiece that goes beyond the fringe existence of a handful of nutcases, and the bleak world of pornography, to paint a portrait of a city whose threadbare, prudish Prussian atmosphere is only made bearable by the desires and confusion of the foreigners who end up here for one reason or another.

Polish director Marczak says he was immediately fascinated by the lifestyle of these young people when he first met them in late 2009. The filmmaker is 35 years old, making him just a few years older than Leona, Dan and Tommy. Marczak spoke with sexologists and sociologists and read reams of hippie literature before he started shooting. Then he waited for over a year. It wasn't until the group became larger and more unstable that he began filming. The director says two questions primarily interested him: "What price does one have to pay to live in a world without rules?" And: "Are these people freer than the rest of society?"

The film "Fuck For Forest" shows the eco-porn hippies as they cruise the streets in a bid to convince total strangers to engage in spontaneous sex in front of the camera; how they use small camcorders to zoom in on their unshaven genitalia and bushy pubic hair; how two of them penetrate each other in front of an audience in a Berlin basement while the others make appallingly bad music and spur them on with songs of encouragement. Theatergoers hear Leona and Tommy talk about how the world needs to be healed and how the spirit and soul of humanity must be liberated. And they see how other people in Berlin shake their heads or turn away in disgust when the FFF followers proffer their naked breasts, tattoos, slogans and music. During the "slut walk," which aims to raise awareness of sexual violence, the eco-porn activists are gently escorted away by Berlin police.

Marczak shows all of this with a great sensitivity for the epic dimension of what is transpiring before his eyes. He doesn't judge or interfere with FFF. His comments are of a purely informational nature. The director doesn't expose the stars of his film, he doesn't ridicule them -- but he doesn't take their side, either. He is fascinated by the contradiction that they represent. Marczak calls them "activists opposing reality." Their desire to change the world stems from radical beliefs, he says, but it also reflects the paranoia of people driven by irrational fears and convinced that the end of the world is imminent.

The film has many sad moments. Right at the beginning, for example, Dan sits on the kitchen counter like a lost bird and talks on the phone with his mother, who doesn't want to see him, although she probably doesn't even know what her son is up to in Berlin. There is also the scene in which Dan is lying in bed with a good-looking German guy, who has an expression on his face as if he were on some mad LSD trip -- and has every good reason to feel confused since he is surrounded by this do-gooder commune of befuddled individuals who can't seem to do anything right, let alone save the world.

But the saddest moment is when the inconsistencies in the sex commune's worldview -- its euphoria and its failures --- become apparent on their trip to South America. Marczak accompanies Dan and his friends to the Amazon basin, where they want to bring the indigenous peoples their money and their message of sex and ideals. But the locals don't want any money or messages from these white freaks, who look like gophers in a compost heap. They're only interested in the chainsaw that another German wants to sell them. You could say that German technology has won out over German idealism.

Somewhere in the border region between Peru and Brazil, Dan and Tommy bitterly complain about the huge TVs that the natives have in their huts. They are so enthralled by the beauty of a young girl that they are half-tempted to take her along with them. They give long-winded lectures to the inhabitants of a jungle village, explaining how they have collected money and why they want to purchase land for the indigenous people.

The reaction is devastating. "I don't need your money," snaps an Indio woman. The hippies are called liars and pedophiles, and for a few moments it looks as if the locals are going to chase them out of the village. Leona, Dan and Tommy briefly fight back their tears and trudge away from the crowd. "If you don't want our money," they say, "then we'll go."

An Examination of Failure

The way Marczak captures all of this -- so intimate, raw and direct -- is emblematic of a documentary filmmaker who masterfully blurs the borders between reality and fiction. The images have the beauty of a bad trip. They are reminiscent of the tenderness and intimacy of the photos that Nan Goldin took in the 1980s and 1990s of dropouts, drug addicts and hipsters on her journey into the heart of darkness, desire and sex. Making the world a better place was totally out at that time, while narcissism was very in.

The images also evoke the lighter photos of Ryan McGinley, with dancing naked young people in the great outdoors, which becomes a vast playground, not for their sexuality, but simply in its own right. It was the youth of the 2000s who danced here, strangely enough, without a care in the world, although the foundation was already cracking and wavering beneath their feet. Yet, in their hedonism, they failed to notice this.

Now, we have these nomads pursuing their yearnings. Once again, there is a new age and a new youth: children who have set out to tackle the greatest challenge of all, saving the world, with neither a movement to back them nor an ideology to help them. They are entirely alone -- and that is part of what constitutes their sadness. It is the truest thing they have to offer.

At the end of the film, when Dan is back home in Norway, he engages in his favorite activity with a couple of Palestinians: He preaches about the blessings of sexuality, saying that we should all be naked, and then we and the world would be better off. Afterwards, one of the Palestinians says very calmly and earnestly that he doesn't understand how, given all of today's problems, Dan can continuously talk about naked bodies.

But Dan isn't happy with the film. Granted, the FFF eco-porn website is promoting Marczak's film because it could boost the popularity of the good cause. But they still have a few ugly scores to settle with the director. Marczak is no idealist, they say, but rather someone who is "quite manipulative" and "a money and fame loving movie maker," as it says on the site.

The activists write that they granted the filmmaker total artistic freedom, but the longer the film project lasted, they insist, the more it became clear to them that "Michal Marczak (…) and FuckForForest had very different motives behind participating in the movie." And then, twice, they use the word "sadly."