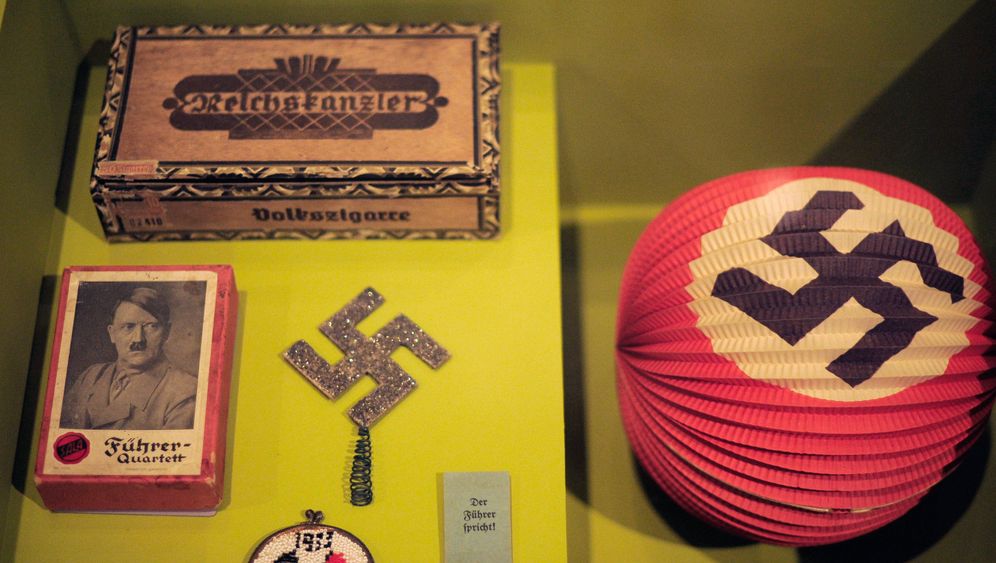 Photo Gallery: The Führer on Exhibit

The portrait is rather pretentious -- oil on canvas, and a whopping156 by 120 centimeters (5 feet 1 inch by 3 feet 11 inches). It shows Adolf Hitler the way his Nazis and favorite artists most liked to see him -- posing as the visionary ruler against a backdrop of an imagined German landscape.

"We likely could have had it," says Hans-Ulrich Thamer. The US Army, which has held the painting since 1939, would certainly have been open to loaning out the painting. But Thamer, a curator for the German Historical Museum (DHM), didn't want it. The rationale, it appears, was that German eyes shouldn't be dazzled a second time by this sort of monumental state-sponsored art from the Third Reich. Thamer prefers, instead, to display smaller reproductions of the Führer. "That detracts from his impact," the curator says.

An extensive exhibition about the dictator opens this Friday at the German History Museum in Berlin, the first in Germany's post-war history to focus exclusively on Hitler's life. The exhibition is not without risks: Organizers fear that the show could be showered with unwanted praise from right-wing extremists -- and with bitter protest from the rest of the country. Indeed, out of a lack of trust in those who will visit the exhibition, the show will omit anything that might glorify Hitler as a hero. "We cannot provide any opportunity to identify with him," has been the watchword for Thamer, who developed the show.

To be sure, there have been countless exhibitions in Germany addressing the Third Reich, covering topics including the Holocaust, crimes committed by the German military, the Nazi justice system, medicine in the Third Reich, forced labor, concentration camps and other horrors. Until now, though, museum directors and politicians responsible for cultural affairs have shied away from dealing directly with the man who presided over those horrors.

A Nervous Wreck and a Laughingstock

The exhibition comes following years in which the public image of Hitler has changed drastically. Recently, he has been portrayed as a nervous wreck during his last days in his Berlin bunker in the film "Downfall;" then as a laughingstock played by German comedian Helge Schneider in "Mein Führer." Hitler is even in Madame Tussauds in Berlin.

Each new realistic portrayal of Hitler has been accompanied by a debate as to the wisdom, for example, of installing a wax Hitler as a tourist attraction next to Heidi Klum in a wax museum. But the discussion has tended to quickly subside (apart from the incident which saw the Hitler wax figure decapitated by a protester. The figure has since been repaired by the museum and is now displayed behind bulletproof glass).

Nevertheless, there are plenty of taboos the museum curators didn't dare touch, starting with the exhibition's title. The idea of calling the show simply "Hitler" was quickly nixed by an expert committee of prominent historians convened in 2004, when the museum first raised the idea for the show. For both conservative historian Michael Stürmer and more leftist colleagues such as Reinhard Rürup, such a name was not permissible.

Above all, the organizers wanted to avoid breathing new life into the old excuses from the postwar period that painted Hitler as the evil seducer of an unknowing and innocent general population. In the end, the exhibition on this sensitive topic was given the title "Hitler and the Germans: Nation and Crime."

Today, of course, it is no longer a matter of dispute that Hitler represented the view of the vast majority of Germans, of the Volksgemeinschaft, at least until 1941 -- that Germans saw themselves in their "Führer." Thamer, who teaches history at Münster University, says "our picture of German society grows bleaker and bleaker," in reference to the current state of research.

Still, an exhibition held in the center of the former Nazi capital follows different rules than the ones that govern academic discourse, and the curators exercised great caution in choosing items for the show. Many of Hitler's uniforms and other personal items have been preserved, in storage in Moscow, but there are no plans to display them. "Using relics like those would cross the line into making this an homage to a hero," Thamer says. The intention is always to create a critical distance between the viewer and the 20th century's greatest criminal.

Visitors to the exhibition are first greeted with three photographic portraits -- Hitler as a party agitator, as a statesman and -- in a photomontage -- as a death's head. Behind these images, which are projected onto a transparent screen, other photographs light up -- of unemployed people, of cheering supporters and of soldiers marching past a burning house. The dictator is never shown alone -- he is always embedded in the social, political and military context in which he acted.

As an additional precaution, an accompanying catalog provides an enormous amount of context, with historians presenting their views on "the Nazi Party's breakthrough," "the iconography of the nation," "women in the wartime community" and various other subjects related to Hitler.

Typifying the entire exhibition is an essay by Ian Kershaw, the British biographer of Hitler, who describes Hitler supporters' quasi-religious relationship to their messiah. "It's a miracle of our times that you have found me," the dictator declared to 140,000 excited supporters in Nuremberg in 1936, "that you have found me among so many millions! And that I have found you, that is Germany's good fortune!"

Kershaw takes a sentence uttered by a Nazi state secretary -- that every German should "work toward the Führer to fulfill his goals" -- as a good explanation of the inner logic of the Nazi dictatorship and of the crimes committed by a population that sometimes acted on its own initiative.

The German History Museum exhibition includes evidence supporting this thesis. There is a tapestry, for example, embroidered by members of two women's groups in the town of Rotenburg an der Fulda. It shows Hitler Youth, SA and League of German Girls formations arranged in the shape of a cross, marching toward a church. The embroiderers further embellished the work with the text of the Lord's Prayer in half cross-stitch. Thamer, who was born in Rotenburg, came across the tapestry by chance during a visit.

The exhibition's items of Hitler memorabilia are rather hidden in a small display case. There's a photo book called "The Hitler No One Knows," by Hitler's favorite photographer Heinrich Hoffmann, and a deck of Führer playing cards that also includes resplendent pictures of Rudolf Hess and other Nazi leaders. These objects are treated almost like pornography, obscene material meant to lose its potential to excite in this solemn museum setting. A chest of drawers from Hitler's New Reich Chancellery is hung crooked, instead of simply being placed on the floor, and an oil painting glamorizing the nation at war likewise hangs askew.

The central insight and most important message for visitors to the exhibition is that "we won't be finished with Hitler for a long time yet," says Simone Erpel, who prepared the show together with Thamer. "Every generation has to find its own answers."

The Museum in History

The show's last room presents 46 SPIEGEL covers on Hitler and National Socialism -- along with the fake Hitler diaries published by Stern magazine. From the earliest title ("Anatomy of a Dictator" from 1964) to the most recent ("The Accomplices" in 2009), these articles also reflect changing perceptions of history.

The one aspect that remains oddly underrepresented in all this is information about the museum's own location in the historical Zeughaus, a former arsenal on Unter den Linden in Berlin. Diagonally opposite the building, on a square next to the State Opera, is the site of the infamous May 1933 book burning. The nearby Lustgarten was decked out with swastika flags during ceremonial occasions.

"Hitler and the Germans" makes no mention of these connections, not even of the day when the Zeughaus itself made history. Hitler had come to view an exhibition of captured Soviet weapons in the building on "Heroes' Commemoration Day," a Nazi holiday, on March 21, 1943. An officer named Rudolf-Christoph von Gersdorff attended as well, carrying two explosive devices and intending to assassinate Hitler.

Gersdorff had already triggered the time-delayed fuses when Hitler sped through the exhibition and left the building earlier than expected. Escaping notice but dripping with sweat, the officer ducked into a bathroom and was just able to defuse the devices before they detonated.