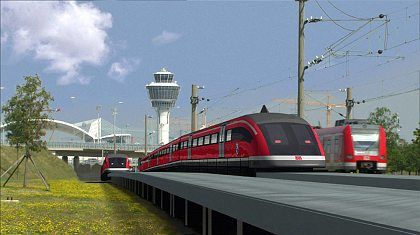 A computer-generated picture of the planned Transrapid in action in Munich.

Germany has finally decided to put its Transrapid high-speed monorail train to commercial use for the first time inside Germany in the form of a shuttle between Munich airport and the city center.

After months of financial wrangling, the national government, the state of Bavaria and the companies building the link reached an agreement on funding for the €1.85 billion project.

The deal was announced on Tuesday by the Bavarian government and is a parting gift from Bavarian premier Edmund Stoiber, who is retiring on October 9. Scheduled for completion by 2014, the Transrapid will cut the journey time for the 40-kilometer route from the airport to the Bavarian capital to around 10 minutes from the current 40 minutes.

German engineers have been refining the technology since they first developed it in the 1960s. The train is propelled at high speeds by a frictionless electromagnetic system. It was developed by Transrapid International, a joint venture between Siemens AG and ThyssenKrup.

The Transrapid can travel at up to 450 km/h (270 mph) floating on a magnetic cushion 1 centimeter above the track. Despite numerous proposals for its use across the world, the only train of its kind in commercial use is as a shuttle from the center of Shanghai, in China, to the city's airport.

Attempts to build a commercial maglev line in Germany have repeatedly been blocked by environmentalists and lack of finance. The Munich project remains controversial, with the opposition Social Democrats and Greens in the Bavarian regional assembly warning that the cost would end up being far higher than €1.85 billion.

But German Transport Minister Wolfgang Tiefensee defended the project, saying: "It uses less energy, is quieter and faster." The federal government and Bavaria are each bearing half of the construction costs.

The agreement comes a year after 23 people died when a Transrapid train crashed into a maintenance vehicle on a 32-kilometer (20-mile) test track in northwestern Germany. More than 30 people were on board, including 23 visitors to the facility, which regularly offers rides.