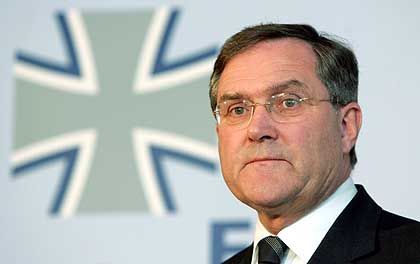 German Defence Minister Franz Josef Jung is under fire for declaring that he would order a hijacked passenger jet to be shot down if it were being used in a terror attack, despite last year's Constitutional Court ruling that it would be illegal.

Jung, a member of Chancellor Angela Merkel's conservatives, told Focus magazine in an interview published on Monday: "If there is no other way I would give the order to fire to protect our citizens."

He admitted that the Federal Constitutional Court had ruled that a hijacked plane could only be shot down if only terrorists and no innocent people were on board.

But he added: "If it poses a general threat or the fundamental liberal democratic order is threatened, other rules apply."

The court in 2006 overturned the Air Security Act which empowered the defence minister to order a plane to be shot down even if innocent people were on board. The court ruled that weighing "life against life'" was in breach of Germany's constitution. The debate has raged in Germany ever since the September 11 terror attacks and security has moved back to the top of the agenda ever since the arrest two weeks ago of three Islamists suspected of plotting bomb attacks.

Jung's comments outraged the opposition and met with strong criticism from members of the Social Democratic Party (SPD), which shares power with Merkel's conservatives. SPD leader Kurt Beck said: "It's simply inconceivable to take that course of action."

Beck told reporters that if Jung ordered pilots to fire on an airliner, he would effectively be turning responsibility for the action over to them. "And after all we've taught people since the Nazi dictatorship  a German soldier would have to say No, this command isn't compatible with the constitution."

Germany's organisation of army fighter pilots VBSK also rejected the idea. "I can only advise pilots not to obey the minister's command in such a case," Thomas Wassmann, VBSK chairman, told the Leipziger Volkszeitung newspaper. He said Jung's statement was akin to "calling on pilots to carry out an illegal order."

Bernhard Gertz, chairman of the German Army Federation, a union representing the interests of military personnel, said pilots would make themselves liable to prosecution if they shot down a passenger jet that was being used as a missile.

But a spokesman for the Defence Ministry defended Jung on Monday, saying it was conceivable that the government could call out a state of emergency in which legal considerations no longer applied -- in that case, pilots wouldn't be allowed to disobey the command.