An icy wind is blowing through the ski stadium in Garmisch-Partenkirchen. Alois Schwarzmüller, 66, has his hands pushed deep into his jacket pockets. Tourists are strolling through the arena, one of Germany's best-known winter sports venues. The Alpine World Ski Championships will be held here in 2011, and the Four Hills ski jumping tournament recently attracted 25,000 fans.

The visitors view the stands and look up at the slalom course on the Gudiberg mountain. A group of Japanese tourists poses for a photo in front of the large ski jump. "And over there, if I may draw your attention to it, is the Führer's gallery," says Schwarzmüller. 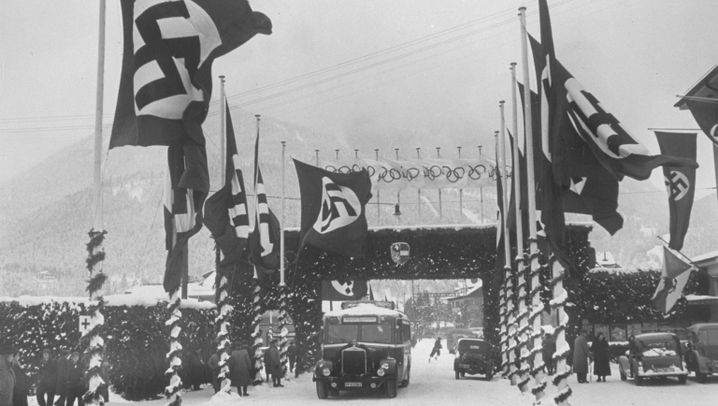 Schwarzmüller, standing with his back to the ski jump, points to a terrace above the Olympia Haus restaurant, which offers a view of the entire arena. "Up there -- that's where he stood," says Schwarzmüller, who is a retired high-school teacher. Adolf Hitler, accompanied by his deputy, Rudolf Hess, was wearing a heavy winter coat when he opened the 1936 Winter Olympics, the biggest sporting event in Garmisch-Partenkirchen to this day.

At that time in Germany, opponents of the Nazi regime were being murdered or sent to concentration camps. The anti-Semitic Nuremberg Laws had been passed only five months earlier. But for 10 days in the Bavarian ski resort of Garmisch-Partenkirchen, the Nazis presented themselves to the international public as a friendly dictatorship. Half a million visitors attended the games. Signs that read "Jews Not Wanted," which had previously been prominently displayed throughout the town, were removed for the duration of the games.

The 1936 Winter Olympics have faded into obscurity. Nowadays, the Summer Olympics that took place in Berlin a few months later are more commonly associated with the Nazis. This is partly the result of the Nazis' bombastic staging of the summer games in the capital of the German Reich, and of the overblown images shown in filmmaker Leni Riefenstahl's films. But it is also the result of Garmisch-Partenkirchen having concealed its own history for decades.

The town, one of the top resort destinations in the Alps, boasts a casino, fine restaurants and high-end boutiques, and the ski lift up to the Kandahar run is considered one of the most advanced in Europe. Garmisch-Partenkirchen and Munich have submitted a bid to co-host the 2018 Winter Olympics. In February, a delegation headed by German Interior Minister Thomas de Maizière and Bavarian Governor Horst Seehofer will travel to the Vancouver Olympics to present the German plan, and in March the first official application package will be submitted to the International Olympic Committee (IOC).

Because of the bid, the town of Garmisch-Partenkirchen is keen to play up the sporting achievements of the 1936 Olympics. But residents of the popular tourist destination are less interested in reexamining the political circumstances of the games.

No Need to Examine the Past

Alois Schwarzmüller is now standing in front of the east wing of the ski stadium. Years ago, there was a proposal to establish a museum and research institute there, but the project was abandoned as being too costly. Schwarzmüller is a respected man in Garmisch-Partenkirchen, where he represented the center-left Social Democratic Party (SPD) in the town council for 18 years. He has also spent many years researching the Nazi past in his hometown. "People here don't feel the need to look into that part of the town's history," he says.

The Werdenfelser Land area where Garmisch-Partenkirchen is located was popular among the Nazi leaders. After the failed 1923 coup in Munich, Hermann Göring fled to Partenkirchen, where he was treated for a gunshot wound. He was named an honorary citizen of the town in 1933. Hitler is said to have wanted to acquire an alpine estate in the region, but the man whose farm he had selected was unwilling to sell, and Hitler had to make do with his mountain retreat in Berchtesgaden.

For the Nazis, the Winter Olympics in Bavaria were the dress rehearsal for the summer games later that year in Berlin. The villages of Garmisch and Partenkirchen were forcibly united. The Alpine panorama, which includes Germany's highest mountain, the Zugspitze, offered an imposing backdrop for the games. However, the organizers were concerned about rampant anti-Semitism in the region.

Shortly after the Nazis came to power in January 1933, local efforts were undertaken to make it difficult for Jews to move to the area, and notices and signs were posted that read: "Jews are not wanted here." In 1934, "doing business in the Jewish language" was banned, and Jews were prohibited from renting or buying property in the town.

Nine months before the games were scheduled to begin, discrimination against the Jewish population had become so widespread that the head of the organizing committee, Karl Ritter von Halt, became alarmed and voiced his concerns in a letter to the Interior Ministry in Berlin. Halt emphasized that he didn't want to be misunderstood -- "I am not expressing my concerns in order to help the Jews" -- but wrote that "if the propaganda is continued in this form, the population of Garmisch-Partenkirchen will be so inflamed that it will indiscriminately attack and injure anyone who even looks Jewish."

The Jew-baiting in the Alpine idyll did not go unnoticed abroad. An English reporter who had traveled to the Werdenfelser Land region in advance of the games photographed the Partenkirchen Ski Club's clubhouse, where a sign reading "No Jews Allowed Here!" was posted on the wall. The image circled the globe. A boycott movement had already been formed in the United States. Organizing committee chief Karl Ritter von Halt was worried that the entire German Olympic project could fail. "If the slightest disturbance occurs in Garmisch-Partenkirchen -- this is something which we are all well aware of -- it will be not be possible to hold the Olympic Games in Berlin, because all other nations will then withdraw from the event."

Invited to Coffee with Hitler

The weather was unseasonably warm shortly before the opening ceremony, but then temperatures dropped just in time for the games. When Hitler arrived on a special government train at the Kainzenbad station, directly at the ski stadium, at 10:55 a.m. on Feb. 6, 1936, there were 20 centimeters (8 inches) of snow on the ground. According to the official Olympic report that was later released, Hitler was greeted with "a hurricane of jubilant voices shouting: Heil!"

At the opening ceremony, 1,100 athletes and officials from 28 nations marched into the stadium. Many extended their right arms in a Hitler salute in front of the VIP stand. Willy Bogner, whose son heads the organization in charge of the "Munich 2018" bid, delivered the Olympic oath.

The sports festival provided the Nazis with the images they wanted to see. Swastika flags lined the town's main thoroughfares. The athletes were performing at their best to cheering crowds. Franz Pfnür, a native of Berchtesgaden, won the gold medal in the alpine skiing combined event, while Polish champion Bronislaw Czech trailed behind, finishing in 20th place.

As a reward, Pfnür was later invited to coffee with the Führer at his mountain retreat in Obersalzberg. He also joined the SS.

Czech, however, joined a resistance group after the German invasion of Poland and worked as a courier. He smuggled people and important documents across the Tatra Mountains to Hungary, until his former trainer, an Austrian, betrayed him to the Germans. Czech was admitted to the Auschwitz concentration camp as prisoner number 349. He died there on June 5, 1944, at the age of 35.

A commemorative publication was printed for the 60th anniversary of the winter games. It is sitting on a table in the office of Mayor Thomas Schmid, who has had it put there -- as evidence.

Schmid, 48, who has been in office since 2002, is considered a modernizer. He is pinning his hopes on winning the 2018 Olympic bid, which would bring the town new luxury hotels, a new conference center and a better rail connection to Munich.

But what about the 1936 Olympics? Schmid insists that Garmisch-Partenkirchen has done a wonderful job of dealing with its past. "We don't sugarcoat anything, and we address the issue head on," he says, citing the commemorative publication as an example.

The cover depicts a ski jumper in the air. The 1936 games brought Garmisch-Partenkirchen "worldwide prominence and recognition," Schmid's predecessor, Toni Neidlinger, writes in the introduction, adding: "the political circumstances of the time complicate the way we view the event today."

The rest of the publication contains reports on the sporting events, stories about German star athletes like Christl Cranz, winner of the gold medal in the alpine combined competition. The political circumstances are glossed over.

This is hardly surprising. The publisher was historian Gert Sudholt, 66, a stepson of the former deputy Nazi press chief Helmut Sündermann. Sudholt heads the Berg Publishing Company, which has been under observation for years by the Federal Office for the Protection of the Constitution, Germany's domestic intelligence agency.

He publishes books that dispute Germany's responsibility for starting World War II and is an adviser to the "Society for Free Journalism," the largest right-wing extremist cultural organization in Germany. He spent several months in prison in 1993 for printing an article by a Holocaust denier. That was just three years before he published the commemorative publication for Garmisch-Partenkirchen, the same publication Mayor Schmid is now touting as evidence of how remarkably well the town has come to terms with its past.

Schmid says that this is the first time he has heard about all this. He seems embarrassed when he hears the story.

Naturally the commemorative publication makes no mention of what happened in Garmisch-Partenkirchen after the Olympics. The anti-Jewish signs were put up again. Beginning in 1937, the resort administration inserted notes that read "Jews not wanted" into all brochures sent to addresses within Germany. On Nov. 10, 1938, the last group of roughly 50 Jews living in Garmisch-Partenkirchen was given a few hours to leave the town. Some committed suicide out of sheer desperation. The local newspaper, Tagblatt, wrote: "Now we are among Germans once again!"

Nevertheless, the IOC awarded the 1940 Winter Games to Garmisch-Partenkirchen once again. But the games never happened. A few months after the IOC decision, the German army invaded Poland, marking the beginning of World War II.

Alois Schwarzmüller still has one of the anti-Jewish signs that were posted in Garmisch-Partenkirchen. An acquaintance found it in her attic and gave it to him. The circular sign, which depicts a swastika on a yellow background, along with the words "Jews Not Wanted," would be a good item to display in an official exhibition.

But Schwarzmüller doesn't think that will ever happen. He senses that town officials are "inhibited and reticent" when it comes to the Nazi past. "They're worried that it could harm the town's image," says Schwarzmüller.

The Garmisch football and track & field stadium is a case in point. Until four years ago, the arena was still named after the president of the organizing committee for the 1936 Winter Games, Karl Ritter von Halt. A member of the IOC at the time, Halt joined the Nazi Party and the SA, the party's paramilitary organization, three months after Hitler came to power.

Later, as a member of the board of directors of Deutsche Bank, he contributed funds on behalf of the bank to a group called the "Circle of Friends of Heinrich Himmler." Shortly before the end of the war, the SS chief appointed Halt to head the Third Reich's umbrella organization for sports.

After a tourist complained that the stadium was named after a high-ranking Nazi, it was rededicated in the summer of 2006. It is now called "Stadion am Gröben."

Members of the town council were notified in an email of the renaming of the stadium, which was done on the quiet. They were also instructed "to refrain from discussing this issue in public."