In July 1981, the gay interest magazine "Rosa Flieder" published an interview with Olaf Stüben. Stüben was one of the most infamous pedophiles in Germany at the time. As a writer for the leftist newspaper Die Tageszeitung, he openly advocated for people to accept pedophilia as healthy and moral.

In the magazine interview, Stüben is asked why it should be acceptable for adults to have sex with children and youths. He talks of quickies with young boys, and declares it backwards to maintain the taboo around inappropriately touching children. "Childlike innocence is an invention of the bourgeoisie of early capitalism," Stüben says.

The interview in "Rosa Flieder" was not a one-off lapse. On the contrary -- in the 1970s and 80s, numerous gay-oriented magazines brazenly promoted sex with children, even running pictures of naked boys. The magazine "Don" presented five sympathetic reports on the experiences of pedophilic men. The headline read, "We're not child rapists!"

In recent months, many in Germany have been discussing the extent to which the Green Party in the 1980s allowed itself to be manipulated by pedophiles. The party came under such intense pressure that it hired political scientist Franz Walter to look into its own history relating to the issue.

Yet it's now clear that the gay movement in Germany must also come to terms with this chapter of its history. Anyone who searches through archives can find ample evidence of the alliance between gay rights organizations and pedophile activists. If pedophiles got into trouble with the law, they could rely on legal advice from a group called "Gay Lawyers." Many politicians in the Green Party also made sure that calls for legalizing sex with children had an audience.

Nowadays it seems puzzling why gays would get themselves mixed up with people whose sexual obsessions were downright illegal. The tolerance for pedophiles was fueled by several different sources. For one, many gays at the time knew all too well what it was like to be discriminated against by the state. Consensual sex between adult men was officially a criminal act up until the end of the 1960s. Only in 1969 did lawmakers in West Germany dismantle the infamous "Paragraph 175" of the German Criminal Code. At the same time, the sexual revolution was breaking out, and many men finally had the courage to come out of the closet.

Thus many gays didn't want to be the ones to judge others for their deviant sexual inclinations. In a climate of general tolerance, the movement lost its moral compass. The gay movement did not distance itself from men who acted on their desire for children; rather, it took them under its wing.

Then there was the remarkable idea that underage boys should not be denied the chance to have sexual experiences with grown men. Even today, the Association of Lesbians and Gays in Germany (LSVD) claims on its website that in the 1980s, the only men who spoke up were those who had enjoyed sex with adults in their youth.

For the pedophiles, the alliance with the gay movement was nothing but beneficial. They had a platform from which they could formulate objectives.

The gay movement helped pedophiles in entirely practical ways. In the pamphlet "Justly gay. Legal advice for gays," there is a one-and-a-half page "argumentation aid." It's an instruction on how men who are charged with child sexual abuse can best escape punishment.

Beginning in the mid-1980s, the gay movement in Germany began to distance itself from pedophiles. At the Green Party convention of the western state of North Rhine-Westphalia in March 1985, the party approved a document that called for the legalization of "non-violent sexuality" between adults and children. The incident caused such an uproar that the Greens missed out on the chance to enter the state legislature.

The gay rights movement also began to notice how much damage the alliance with pedophiles was causing. Suddenly gays had to fight back against the cliche of the "homosexual child molester." Their actual goals, like the creation of an effective AIDS policy and the end of societal discrimination, were relegated to the background.

The women's movement was also partly responsible for raising awareness among leftists of the harm caused by pedophilia. Prominent feminist Alice Schwarzer was active in fighting child abuse when pedophilia was still considered an acceptable form of human sexuality in some circles.

While the now-defunct leftist alternative magazine "Pflasterstrand," then edited by current Green politician Daniel Cohn-Bendit, justified sex with children, Schwarzer caused a sensation with an interview in her magazine "Emma." She spoke with sexual educator Günter Amendt, who was considered especially progressive at the time. Still, he criticized that pedophiles always exploited their position of power over children. There could be no discussion of love on an equal standing, he said.

Past Advocates Tight-Lipped on Issue

Of course, Schwarzer says today, pedophilia is not an issue among gays. There are more heterosexual pedophiles than homosexual ones, she says. "But the gay rights movement needed to distance itself more clearly. And a problematization of pederasty, sex between men and young boys, has not yet occurred."

But there are hardly any gay activists who are willing to talk about the dark days of the past. Volker Beck, who represents Cologne in the German parliament, has made it clear that he has already said all he is going to say about the subject. Beck was for a long time the spokesman for the Greens' Federal Working Group for Gay Politics.

In the 1980s, he wrote a contribution for a book called "The Pedosexual Complex" in which he advocated for the decriminalization of sex with minors. He later claimed that the passages were later edited into his text. He can't prove if that is true or not.

The LSVD is also tight-lipped when it comes to clarifying its involvement with pedophilia. In the 1990s, they wrote clear explanations, says Günter Dworek from the board of directors. The paper from 1997 is essentially unapologetic. It says it is abuse "if adults satisfy their sexual needs at the cost of children." However, there is no word on the former alliance of gays and pedophiles in that text. 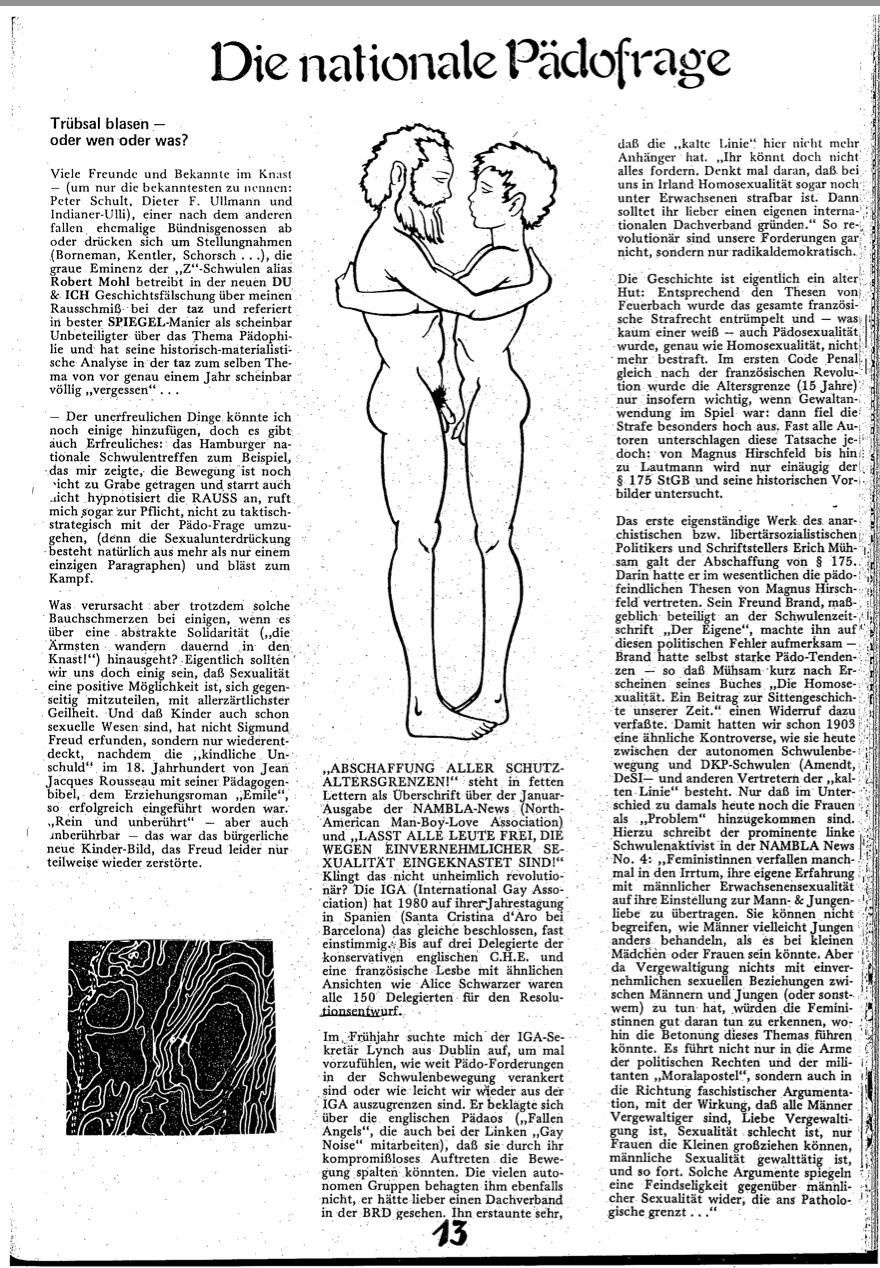