The Lesbian and Gay Federation in Germany (LSVD) is outraged. Following news reported this week by the online magazine Telepolis that the Union of Catholic Physicians (UCP) has been offering homeopathic "Therapy Options for Homosexuality" on their website, the advocacy organization called the suggestion an "insult," and an "impertinence" that showed "a lack of respect for homosexuals and bisexuals."

The religious association, which calls itself the "voice of the Catholic medical community," writes on its website that while "homosexuality is not an illness," a host of treatments are available to keep such "inclinations" at bay. Possibilities include "constitutional treatments with homeopathic tools … such as homeopathic dilutions like Platinum," "psychotherapy," and "religious counseling." Among homeopathy's controversial treatments are the prescription of "Globuli," tiny pills that consisting mostly of sugar.

"We know about a number of people with homosexual feelings who find themselves in a spiritual and psychological emergency and suffer greatly," UCP head Gero Winkelmann told SPIEGEL in a written statement. "If someone is unhappy, ill or feels they are in an emergency, they should be able to find options for help with us."

But the doctor, who runs a private practice with an emphasis on homeopathy in the Bavarian town of Unterhaching, also stressed that the UCP website had not been recently updated, "because the issue is not particularly topical at the moment."

As for the scientific basis of the treatments offered by the UCP, Winkelmann listed "medical-psychotherapeutic, philosophical and theological literature," the "minority views of psychotherapists," the "teachings of the Catholic church, the Holy Scripture," and the "homeopathy of Samuel Hahnemann," the German physician credited with creating the practice.

But touting ineffective medication for nonexistent suffering is unacceptable, the LSVD said. "The offerings are dangerous," said spokeswoman Renate Rampf. "They use the insecurities of homosexual or bisexual young people and their parents." Such "laughable" therapeutic ministrations are problematic because they can be "destabilizing," she said.

"All serious experts agree that sexual orientation is already evident in early childhood," she added.

But Winkelmann defended the treatments, saying his organization's intentions were not meant to "injure or pressure" anyone, but to express a "position and medical opinion" to interested parties.

The UCP website includes a testimonial from a southern German gay man who writes that he had been happy to find that the organization believed "that changing homosexual tendencies was possible" because finding a therapist to undertake such a task had been difficult. "Unfortunately the widespread opinion among psychotherapists is that homosexuality is inherent and unalterable," he writes.

While the UCP says it does not represent official Catholic policies, the Church continues to grapple with its approach to homosexuality. Just last month Cologne Archbishop Joachim Meisner withdrew the religious teaching privileges of prominent publicist and pedagogue David Berger after he revealed his homosexuality and criticized the Catholic stance on the issue. The church declared that the teacher could "no longer credibly give Catholic religion lessons on behalf of the Church."

Though Germany's Protestants tend to take a more liberal approach to homosexuality, conservative members of the church also continue to raise opposition to gay-friendly policies. In 2009 some 30 pastors from the state of North Rhine-Westphalia wrote an open letter to condemn statements made by the church's state president Alfred Buss. "The practice of homosexuality is not consistent with God's creation," said the letter to online news portal Der Westen. Those who discredit therapy for homosexuality deny people "who suffer from homosexual feelings the help to change," the letter continued.

Meanwhile the World Health Organization (WHO) removed homosexuality from its International Code of Diseases on January 1, 1993. The move brought the "19th century to an end for gays and lesbians 90 years too late," said the LSVD at the time. But perhaps they rejoiced too soon. 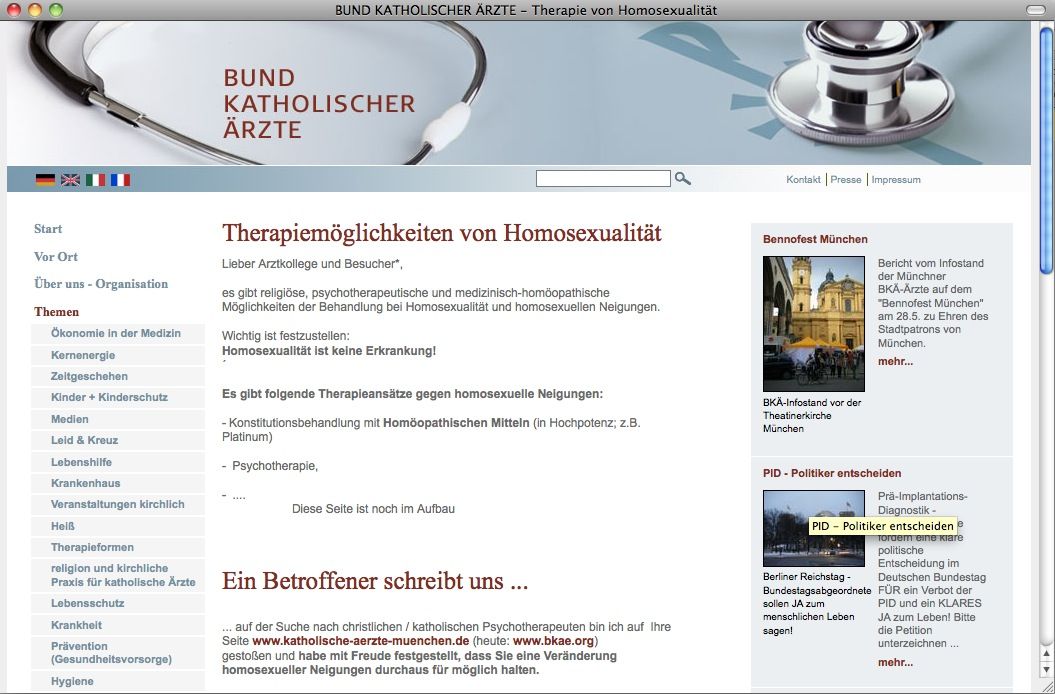 A screenshot of the UCP's list of therapy options for homosexuality.