The issue was delicate. So delicate, in fact, that conservative parliamentary group chairman Volker Kauder didn't want to bring it up in the chancellor's weekly breakfast with her closest party allies. Normally, the ministers from Angela Merkel's conservative Christian Democrats and their Bavarian sister party, the Christian Social Union (CSU), can discuss anything at the Wednesday morning meeting. But this time, Kauder chose to discreetly take her aside.

He made it clear that he expects her to adhere to the party position later this week in Germany's parliament, the Bundestag, and vote against a draft law that would implement a gender quota for women on executive boards. It would be unacceptable for such an important minister within the government coalition to show disloyalty, Kauder hissed.

While von der Leyen's reaction to this lecture remains unclear, one thing is certain: All is not well in Merkel's center-right coalition ahead of Thursday's vote, when parliamentarians will decide whether to approve the draft law put forward by the city-state of Hamburg, led by the center-left Social Democratic Party (SPD). It aims to implement a fixed quota of 20 percent for women on the supervisory boards of stock exchange-listed companies by 2018.

At first glance, the issue is purely symbolic, ultimately affecting the careers of just a few hundred women, who the law would help usher into the top levels of German companies. Much more is at stake, however, thanks to a number of parliamentarians from both Merkel's conservatives and her junior coalition party, the Free Democratic Union (FDP), who are considering voting in favor of the measure. The vote has now suddenly also become about coalition solidarity, particularly after its leaders promised not to approve a legally binding gender quota. It is also about von der Leyen's credibility as a minister who has styled herself as a potential successor to Merkel someday.

That's because the possibility of a majority vote depends mostly on her. Like von der Leyen, many women within the coalition support a legally binding gender quota, and last year some 20 politicians from both the CDU and FDP signed on to the "Berlin Declaration," which calls for at least 30 percent of a supervisory's board seats to be filled by women. But it's one thing to support something in theory, and another to vote out of conviction when it counts, which is the reason Kauder spoke so urgently with von der Leyen who, as the most prominent minister in Merkel's cabinet, could turn the tide.

Cracks in the Coalition

There is talk of coalition rupture in Berlin. "When fluctuating majorities happen, a coalition is no longer capable of acting," one CDU minister says. "Then total chaos reigns." Members of the FDP agree. For the business-friendly party, voting against the quota is a matter of principle. The party does not want to be part of a government that repeatedly imposes new regulations on companies.

All eyes are now on von der Leyen. If she votes against the quota, she'll look like a loud-mouth, a woman who stylizes herself as a feminist warrior, but gives in at the moment of truth. If she votes along with the opposition Greens, SPD and far-left Left Party, however, it will mark a break with her party's rules and cement her reputation as a troublemaker. "A member of the government can't vote for an opposition proposal," says Stefan Müller, parliamentary whip for the CSU.

The messy situation is largely due to hurt feelings, disappointment and outrage. The government is led by a woman who has done practically nothing for women's policies in the last four years, which has sparked something akin to a revolutionary mood among many female parliamentarians. They have had to watch as the conservatives pushed through child care subsidies that encourage women to suspend their professional careers to stay home with children. They have also looked on as Family Minister Kristina Schröder, who is responsible for the women's policies, has thrown her support behind a voluntary "flexi-quota" for companies and waged a running battle on the women's movement and its icon, feminist Alice Schwarzer.

Merkel has mollified and placated them as best she could, but many of these women are no longer prepared to be put off by promises. "It cannot be that the only achievement in women's policies this legislative period is the child care subsidy," CDU parliamentarian Elisabeth Winkelmeier-Becker recently said in the company of other female party members. Together with Rita Pawelski, who heads the CDU's parliamentary women's group, she is trying to rally a cross-party majority for the legally binding quota. Both women are at the heart of a troop of revolutionaries who are hunting for coalition allies.

The Responsibilities of a Role Model

But it remains to be seen if a fixed gender quota will manage to make it through the Bundestag. A minimum of 21 of the governing coalition's parliamentarians will need to vote with the opposition. Promisingly for supporters, however, a number of men have started to come out as quota backers too.

"I would rather be scolded by my parliamentary group leadership than by my wife," said Josef Göppel, member of parliament for the CSU. As far as he is concerned, the issue goes beyond political strategizing. He has four grown daughters. "Young women are aware that they cannot get ahead as easily as their male peers," he points out. "I firmly believe that a fixed quota will inevitably improve women's standing in terms of salaries."

Ultimately, the ball is in von der Leyen's court. Given that she is labor minister and deputy CDU leader, if she gives the gender quota a thumbs-up, many members of parliament will take their cue from her. Women's groups are therefore pinning their hopes for the future of the coalition on her -- which is why her current position is so uncomfortable.

On the one hand, she is a role model for women who see Merkel's Christian Democrats as too cautious. She put the gender quota issue on the CDU's agenda, and didn't care when she effectively duped the Chancellor and Family Minister Kristina Schröder, who succeeded her in 2009. "I know that I am the driving force when it comes to the gender quota," she said.

But on the other hand, she still has political ambitions. Along with Defense Minister Thomas de Maizière, she is widely seen as a potential party leader. But she would have to banish any hope of climbing further up the party ladder were she to tip the coalition into anarchy this election year. Why would the party choose a troublemaker when it could vote for de Maizière, a solid teamplayer?

Looking for an Escape Route?

The tricky situation that Von der Leyen's finds herself in is the grist to the mill of her many enemies within her own party. Ministers must set an example, Family Minister Schröder has observed somewhat smugly, saying: "I know only too well how much we members of the cabinet shoulder a special responsibility for ensuring solidarity within the coalition."

Meanwhile, Julia Klöckner, head of the CDU in Rheinland Pfalz, has reminded von der Leyen that a fixed quota was rejected out of hand at the last party conference. "As deputy national chairman, I believe it is important to respect this decision," she says.

Whatever von der Leyen decides, many are bound to be disappointed. One way out of the dilemma might be to simply vote no on the grounds that the Bundestag motions are inadequate. In recent weeks, her people signaled that she would of course be backing the quota. But now, insiders say that the parliamentary motion needs to lay out a 30 percent quota as specified in the Berlin Declaration. The Social Democrats' motion lays out a quota of just 20 percent for the next few years.

On Monday, after a meeting of top party members, the CDU announced it had reached a compromise, agreeing to add a fixed gender quota of 30 percent beginning in 2020 to its election platform. But it remained unclear whether the potentially rebellious coalition members had also agreed to this. Parliamentary group leader Kauder reportedly had plans to meet with them on Monday evening.

It looks as though the conservatives and possibly von der Leyen are looking for an escape route. Will she take it? Naturally, the minister knows that the issue is not just about percentages. It is also deeply symbolic. As a politician, she has always been happy to make symbolic gestures. She might find it hard to explain why she's suddenly changed her mind. 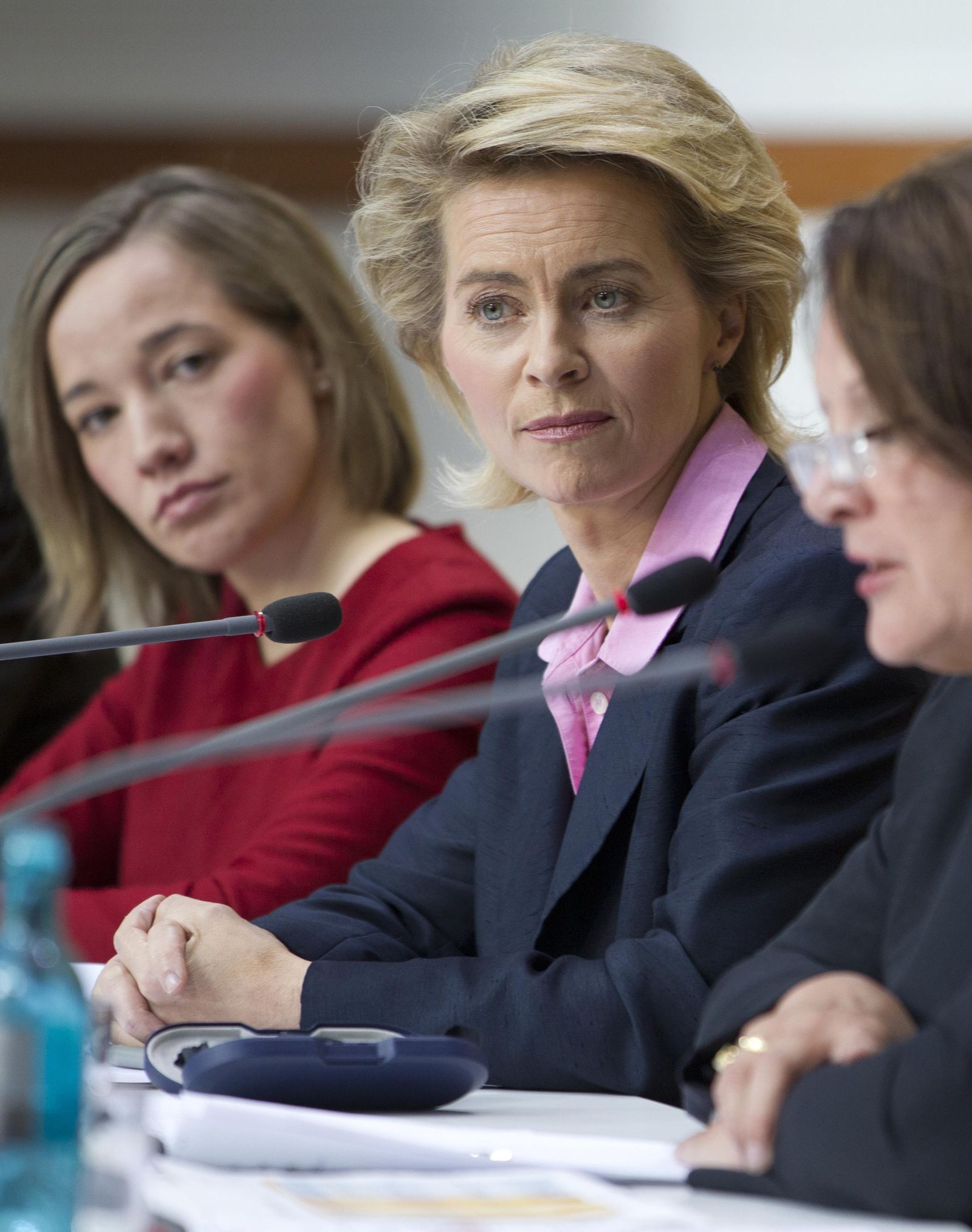