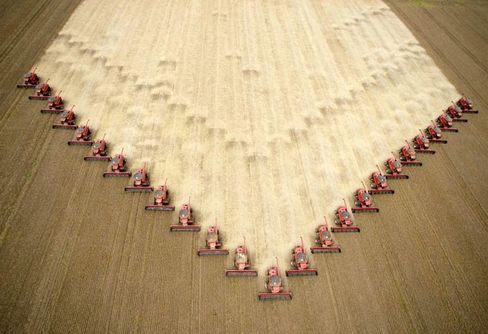 All's well again in the world of Bavaria's conservative Christian Social Union (CSU) party, an outspoken opponent of genetic engineering and genetically modified (GM) plants. German Agriculture Minister and CSU member Ilse Aigner has slapped a ban on MON 810, a type of GM corn seed produced and marketed by the American agricultural corporation Monsanto, and opponents of the technology are celebrating the victory. Germany's governing Christian Democratic Union (CDU), the CSU's sister party, opposed the ban at first but eventually supported it. Now the CDU hopes that its support will lead more Bavarians to return the favor by voting for the CSU in the upcoming German and EU parliamentary elections.

The inhabitants of rural Bavarian towns, whose fields have become battlegrounds for people for and against genetic engineering, can now breathe a sigh of relief. But the real problems are just beginning -- only in other places.

Outside Bavaria, the world is approaching a scenario first described by the British economist Thomas Malthus in 1798 -- agricultural production can't keep pace with population growth.

Since 2000, the demand for food has been growing faster than the supply. Nearly one billion people are considered undernourished. Refugees from Africa flee over-fished lakes and expanding deserts and arrive in Italy and Spain by the thousands.

In global terms, cultivable land and agricultural productivity have hardly increased. Agriculture is flagging, while the world's current population of 6.8 billion is predicted to reach 9 billion by mid-century. Fields that would normally yield food are now being used to produce biofuel. And it won't be long before the rest of the world will want to consume as much meat and dairy as people in Europe and America do today. But producing one kilogram of beef requires many more kilograms of animal feed.

All this is taking place on a planet whose atmosphere will only grow warmer and more severely affected by extreme weather. Land use is partially at fault for these changes, as they are spurred on, for example, by methane emissions from cattle and carbon dioxide released by burning forests. At the same time, erosion, salinization and desertification are all reducing the amount of cultivable land.

Some believe that genetic engineering can help solve this problem. But, in Germany, anyone who even asks this question is automatically considered suspect.

Still, it's only thanks to a scientific breakthrough that Malthus' prediction of catastrophic overpopulation has not yet proven true. In the mid-19th century, German chemist Justus von Liebig recognized that adding minerals to soil could massively increase crop yields. He then went on to invent chemical fertilization, which made it possible to feed more and more people.

The current set of circumstances raises a number of questions: Who is making sure that agricultural scientists today can follow in the footsteps of Justus von Liebig? What is Germany -- with its antipathy to genetic engineering -- contributing toward ensuring a food supply for the world's future population? And what are Monsanto's opponents doing to fight back as the corporation tries to monopolize the seed market?

The answers are sobering. Agricultural research funded by the German government is running dry, especially when it comes to studies aimed at finding solutions to global food problems that don't involve genetic engineering. "There's no master plan at the federal level as to how Germany can fulfill its global responsibilities," says Thomas Jungbluth, dean of the Department of Agricultural Sciences at Hohenheim University, one of Germany's largest centers for agricultural research. In recent years, there have been reductions in many professor positions and institutes across the country.

"We're currently destroying our basic tools for these tasks," warns Volker Hoffmann, who is also a professor at Hohenheim University and speaks of an "existential crisis for agricultural research at German universities." For too long, Hoffmann says, politicians at both the national and state level have seen the academic field as "unsexy" and old-fashioned.

At the same time, developing countries suffering from food shortages are looking with high hopes to countries like Germany that are rich, strong in the sciences and have a respected tradition of agricultural research.

Students come to Hohenheim from all over the world, but then they find themselves in a country that gets panicky about every grain of genetically modified pollen -- without engaging in discussion about other ways to develop agricultural technology that could feed 9 billion people in a changing climate.

Germany's four government-funded research institutes and their many branches -- all of which are overseen by Agriculture Minister Aigner -- do have a research plan that lists "seven main goals and 88 primary tasks" for the several hundred scientists they employ. But lacking among them is a concerted effort to find the best concepts for feeding the world.

When riots over ballooning food prices broke out last year across the world, the federal cabinet made a decision to strengthen Germany's agricultural research activities. The government will now spend up to €40 million ($52 million) over five years, but only as one-time funds and primarily for projects unrelated to fighting the causes of the crisis.

Creating Your Own Monsters

To actually get at the causes would require a systematic departure from current agricultural research, similar to the green revolution of the 1960s and 1970s. Farming practices would have to be changed so as to release fewer greenhouse gases and to use less water, which would help protect reservoirs of available drinking water. Likewise, it would be essential to prevent agriculture from expanding into the world's last untouched natural regions, such as rainforests or savannahs. New plant species that are resistant to drought, salinization and pests would have to be found and put into use. At the same time, the hundreds of millions of small farmers who make up the backbone of agricultural production must find a way to make a living instead of seeing their fields fall into the hands of corporations.

But, instead, Germany's narrow-sighted policies have led to a situation in which, in the future, only companies like Monsanto -- which filed a lawsuit against the German government Tuesday claiming that its ban on MON 810 is arbitrary and contravenes EU rules -- will have the strength and expertise needed to develop high performance plant species that can cope with the world's requirements.

And who else could carry out the task? The only possible counterbalances to Monsanto are the botanists and agricultural researchers at government-funded universities and institutes, together with medium-scale plant breeders. If they could develop better species and technologies than Monsanto, they could then secure the patents for the common good and offer them to the general public free of charge.

Still, in order to have a chance of succeeding, they would need to have society behind them and be given some leeway when it comes to deciding whether genetic modification or another breeding method is the best solution for a particular problem.

A modern Liebig wouldn't count on a single cure-all. Instead, he or she would look for more complex solutions -- that is, perhaps, to try to combine the conservational principles of organic farming with the methods of genetic engineering. The much-loved blanket demonization of genetic engineering blocks this path just as much as Monsanto's control over the markets and the patenting of genes.