It once had the distinction of being Germany's first pedestrian zone. In recent years, however, Grosse Bergstrasse in Hamburg's Altona district has been in decline. Now the shopping street is back in the headlines: as the scene of a battle between local residents over whether Swedish furniture giant should be allowed to build a new inner-city store there.

Ikea's plan to build its first inner-city outlet on Grosse Bergstrasse is the area's last hope, say supporters. The proposed site currently contains the Frappant building, a 1970s concrete behemoth left over from the shopping street's heyday. Proponents claim the new plan, which Ikea says will bring Altona €70 million ($100 million) in investment and 250 jobs, will give the whole neighborhood a new lease on life. 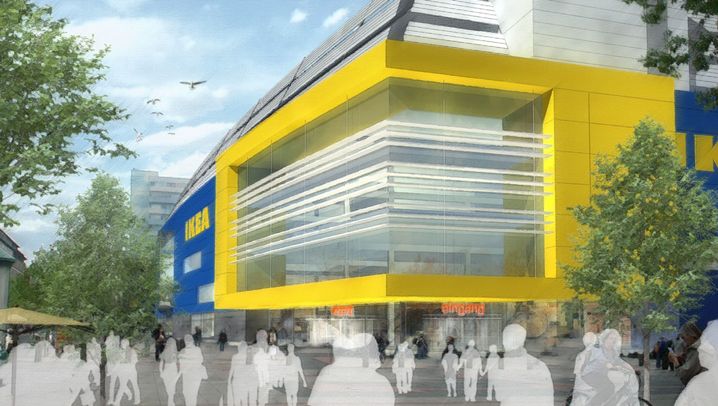 Critics retort that if Ikea moves in, Altona will suffer massive traffic gridlock. Their idea is to convert the Frappant building into a center for residents and artists instead. They have been collecting signatures in a bid to force a district-level referendum against Ikea. They need 5,600 signatures for the referendum to take place. The activists have already turned in their signature lists, but it won't be known for a few days whether the signatures are valid.

But, in an illustration of just how much the issue has polarized locals, the pro-Ikea camp has already forced through its own referendum. Around 82,000 people -- some 44 percent of registered voters in the district of Altona -- voted in the local referendum, which closed Tuesday. The votes are now being counted, with the result expected to be announced on Thursday or Friday.

If the anti-Ikea camp wins a majority, the company will not be able to open a store in Altona. But if supporters of the project are in the majority, then district and city authorities would be able to move quickly and give Ikea a building permit -- unless a possible second referendum manages to stop them.

Supporters of the project make up a broad front. It's not just Ikea which wants to build the store --- as it happens, the Swedish company says it will only go ahead if a majority of residents wants the project. Local politicians from all parties -- except the far-left Left Party -- also support the project. That even includes the Green Party, a major player in Altona politics, which one might have assumed would be opposed to a multinational company moving into the neighborhood.

All these groups are making the case that Ikea has developed a new approach for Altona in the form of a pedestrian zone Ikea store, something the Swedish company states does not yet exist in this form. So far such stores have existed only as smaller branches, for example in Taipei, Taiwan, or Coventry, England. "City Ikea" is the working title for the Altona store, which is anticipated to have around 20,000 square meters (215,000 square feet) in floor space, less than the standard Ikea branch. The main difference from the usual layout, however, is that the store planned for Altona would have considerably more than two stories. That means the store would have less area but more height and offer a slightly modified range of products, Ikea told SPIEGEL ONLINE in a statement.

Still, the building would stand 37 meters (121 feet) tall. The concerns of architecture-loving residents that the current giant concrete building will simply be replaced with a blue and yellow palace of corrugated sheet metal can't be entirely dismissed. For supporters, however, that doesn't outweigh the advantages. The most attractive thing about the plan for them is the chance that it will bring Grosse Bergstrasse's long-term problems under control. The city has blocked other locations Ikea requested -- in the full knowledge that Germany is the company's most important market, representing 20 percent of sales, and that Ikea has long wanted to open a third branch in Hamburg.

Better than the Status Quo

Grosse Bergstrasse was a model of urban development in the 1960s, just as its Frappant building became a decade later, with floor space equivalent to seven soccer fields. A Karstadt department store was the main tenant in the building for decades, along with dozens of boutiques, restaurants, a gym, and a number of apartments.

The decline, however, began in the 1990s. As more modern stores sprang up elsewhere, fewer and fewer people frequented the Frappant building. One by one, its stores closed their doors, meaning even fewer shoppers came. Karstadt moved out in 2003. All attempts to reinvigorate the shopping center since then have failed and a series of investors have given up on the project. Today Grosse Bergstrasse is decidedly downmarket and is home to discount clothing stores, low-end restaurants, billiard halls -- and not much else.

Klaus-Peter Sydow, one of the initiators of the pro-Ikea referendum, runs a tiny travel agency on Grosse Bergstrasse with his family. "Economically speaking, staying here hardly makes sense," he says. "I'll be closing up shop if something doesn't happen soon." Sydow and other business people initiated the referendum petition to keep the critics from defining the debate. It doesn't matter to him, he says, "whether Ikea moves in here or somebody else. The important thing is that something happens."

What unites supporters of the proposed Ikea branch is that they all agree on one fact -- anything is better than the status quo. Opponents of the plan, however, have more disparate interests. A range of concerned residents and artists make up the other front in the battle over the furniture superstore.

Residents are worried first and foremost about traffic. According to Ikea's plans, half of its customers would arrive by train, bicycle or foot. But will shoppers from far-flung parts of Altona really be convinced to change their ways and come by public transport rather than by car? What will happen on the weekends, when other Ikea stores typically experience a massive influx of traffic?

Many in Altona would love to hear an answer to these questions. But when SPIEGEL ONLINE asks local authority spokesman Rainer Doleschall about the possibility of an Ikea-related gridlock, he simply leans back in his chair and smiles. "Good question," he says. "Next question."

It's responses like these that enrage opponents of the project, who see them as representing the ignorance of politicians and local authorities. On top of that comes the discomfiting prospect that an Ikea-driven boom could cause the area surrounding Gross Bergstrasse to transform into a luxury quarter for high earners, similar to what happened in the nearby neighborhood of Ottensen. Experts call the phenomenon gentrification -- as poorer residential areas appreciate in value, first rents begin to rise, then residents who can no longer afford the new cost of living move away.

Linda Heitmann, 27, head of the local Green Party and a member of Hamburg's state parliament, isn't concerned about gentrification. "You just need to look at other trendy Hamburg neighborhoods to see that this process happens no matter what you do," she says. The Greens are proud to have formulated a few demands for Ikea. Among other things, they want to forbid the company from raising flags in front of the Altona building.

A Vision for the Building

Critics see that as capitulation, an admission on the part of the borough administration that it doesn't have the money, patience or imagination to deal with the area. And that's where the artists come into play.

More than 130 artists and other freelancers have moved into the Frappant building as interim tenants, setting up studios, exhibition spaces and offices in the upper floors. A room called the Blinzelbar faces the street, providing a venue for concerts, parties and exhibitions. It is also the Ikea opponents' window on the city, where they drink steaming tea from plastic cups. The building's owner, a real estate company located in far-off Munich, has shut off the heating.

"Altona is going to be inundated with traffic," says Anna Bergschmidt, who lives around the corner. She is wearing a button with a crossed-out Ikea logo on her jacket. She finds a building full of artists a more attractive prospect for her neighborhood -- and is frustrated that the local authorities won't accept that idea as a realistic alternative.

"We have a vision for this building," says Benjamin Häger from the activists' Frappant Association. He developed an idea together with others to turn the concrete block into a community center complete with shops, a meeting place for seniors, a preschool, studios, workshops and a landscaped parking deck. Everything would be under one roof again, the way it was in the 1970s. Häger gives the examples of London and Zurich, where urban districts have been made attractive again through cultural and educational centers, rather than mega shopping centers.

What will happen if the result of the referendum is a "no" to Ikea? The city could buy the building from the investor and develop something new in concert with the residents and artists.

In the past, however, politicians and local authorities generally adopted an easier solution -- they left the building alone, in the hands of an anonymous investor, for years. Many residents find it hard to believe anymore that anything will change on Grosse Bergstrasse unless Ikea gets involved.