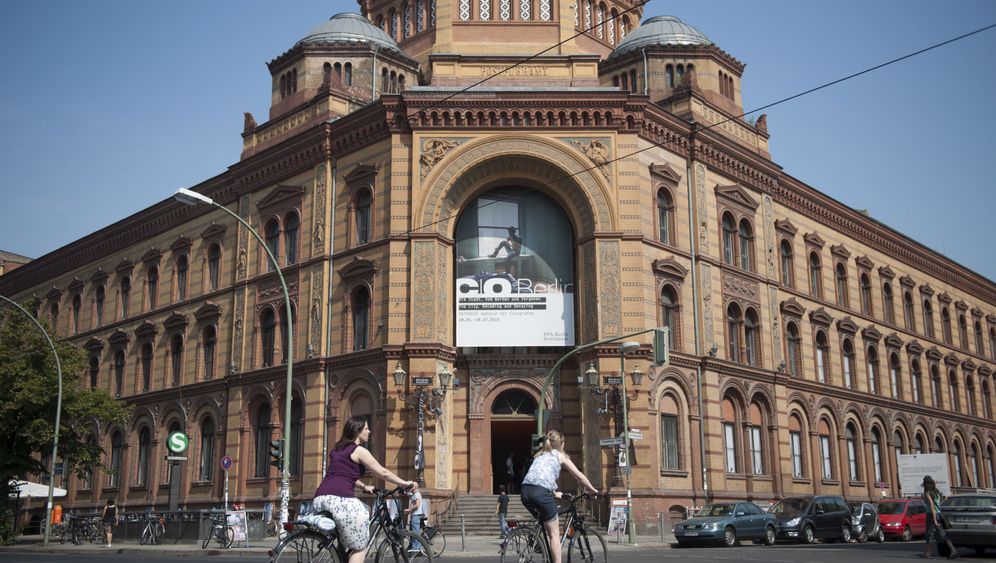 It's been many years since Oranienburger Strasse, in the central Berlin district of Mitte, was a hub of underground culture and alternative lifestyles. It has long since morphed into a tourist strip, with the usual mix of generic fashion shops, flashy bars and cheap eateries. But a few centers of culture have tried to hold out amid the encroaching commercialization. Now, however, both C/O Berlin, an internationally renowned photography gallery, and Tacheles, a huge former squat turned art center, face eviction. Gentrification is wiping away the last vestiges of the vibrant post-1989 scene.

C/O Berlin had surprisingly modest beginnings. Photographer Stefan Erfurt was looking for a place to mount an exhibition of photographs by the famous Magnum agency in 2000 when he stumbled upon the empty former post office on the corner of Oranienburger Strasse and Tucholsky Strasse in the German capital. From that improvisational beginning, an international success story was born.

Good contacts, for example with star photographer Annie Leibovitz, and an unconventional management style turned C/O Berlin into a beacon for the booming photography scene. The gallery has combined exhibitions of contemporary photographers such as Bettina Rheims, Roger Melis and the duo Pierre et Gilles, with shows highlighting the work of legendary names like Robert Capa and Henri Cartier-Bresson.

The Charm of Contrast

The images of these world-renowned photographers were displaced on the peeling plaster and faded wallpaper of the massive old red-brick building. This is part of the gallery's charm, this contrast -- the unrenovated becomes hip, the improvised becomes internationally acclaimed and C/O Berlin has remained both credible and uncommercial. Its management say it is a "typical child of Mitte," and last Thursday it held a big party to celebrate its 10th birthday.

It was most likely the last big bash, at least at this location. By the end of March 2011 C/O Berlin has to leave the protected historical building, which in addition to the gallery space is also home to an upscale restaurant and nightclub. Israeli investment group Elad, the company that converted the legendary Plaza Hotel in New York into luxury apartments, has bought the former post office building. It plans to turn it into a hotel and shopping center.

Berlin's city government has little enthusiasm for the project, but there is little officials can do to stop it. Berlin Culture Senator André Schmitz says he doubts if Elad will be able to get the necessary planning permission to start on its plans soon. And Berlin Mayor Klaus Wowereit, who has long sought to promote Berlin's vibrant cultural scene, said at last Thursday's birthday party that it would be "absurd and idiotic" to evict the current occupants by the end of March if the new project wasn't ready to begin by that date.

If the gallery is kicked out of its current location, it will likely be the final nail in the coffin of the surrounding area's cultural significance. Walking from C/O Berlin in the direction of the Hackescher Markt S-bahn suburban rail station, there is little sign of the pioneering galleries and bars that once marked the street. Instead there are rows of slickly renovated buildings, housing fashion stores and fast-food joints.

It is all part of the usual process of gentrification. The small galleries, artists and other innovators first flock to an area, making it a desirable place to live, then the tourist hoards arrive, followed by the investors. The pioneers then have to leave because they can't afford the rents or because the building has been sold off.

This is exactly what is happening to Tacheles, a colossal former squat, located down the road from C/O Berlin near the corner with Friedrichstrasse. It houses a cinema, theater and bars on different floors, and its 30 different studios provide hundreds of artists with a cheap place to work. But they will soon have to look elsewhere. The building has to be empty by the end of this month. Current owner HSH Nordbank wants to put it up for auction.

Artists first squatted the former department store at the beginning of the 1990s and it became a magnet for creative types from around the world. The tourists followed. Tacheles now attracts over 300,000 visitors a year. Is it a victim of its own success? "Certainly we have become an economic and image factor over the years, but we are still a real place," says Linda Cerna, spokeswoman for Tacheles. "One can experience this special otherness of the city here."

In the period after the fall of the Berlin Wall in 1989, the cheap spaces and creative atmosphere attracted many cultural niche projects to the area, located in the former east. But few can hold on for much longer in the face of gentrification. Last week, when 5,000 people demonstrated under the banner of "Save your city!" against the "cultural cull," representatives of Schokoladen and Acud, another two of the original alternative centers facing closure, were there alongside the people from Tacheles.

"Living cultural centers are being pushed out by an infrastructure geared toward tourism, because city planning is based upon the dictate of exploitation," says Berlin sociologist Andrej Holm, whose Gentrification Blog (in German) chronicles the changes to the city. "The politicians should have stepped in 20 years ago," he argues. "When the politicians now publicly regret that the cultural organizations have to go, then that is just amusing," he says.

"At the moment the creatives are moving to Neukölln (in southern Berlin) and Potsdamer Strasse in Schöneberg (in western Berlin)," says Nicolas Jeissing, manager of the Berlin-based real estate company Engel & Volkers. "No one can charge €15 ($19) rent per square meter there yet." Cultural institutions are faced with a choice: either they make up for the rising rents through a more professional and commercial operation, or they must move on.

A Tightrope Walk Between Art and Commerce

C/O Berlin seemed to have successfully walked this tightrope between art and commerce. The gallery's management team was able to finance its ambitious exhibitions through entrance tickets and sponsors, without ever having to ask for public funding. A major retrospective of Annie Leibovitz's work in 2009 attracted more than 100,000 visitors and even enabled the gallery to turn a profit. However, without an attractive location like the one on Oranienburger Strasse, this financial model will be a lot harder to pull off in the future.

"We can only be successful in the long term if we think like entrepreneurs," says C/O spokesman Mirko Nowak. The gallery is already began hunting for a new building. "But we don't want to be a plaything for investors any more," he says, adding that C/O Berlin wants to remain in the Mitte district. That is the only way to continue to realize their vision: of being an open house and a central point for making art accessible.

Nowak has no problem with the city of Berlin using it to attract tourists. "In a commercialized area, that is the only way to exist. But if we are already doing the marketing work, then the city has to give something back."