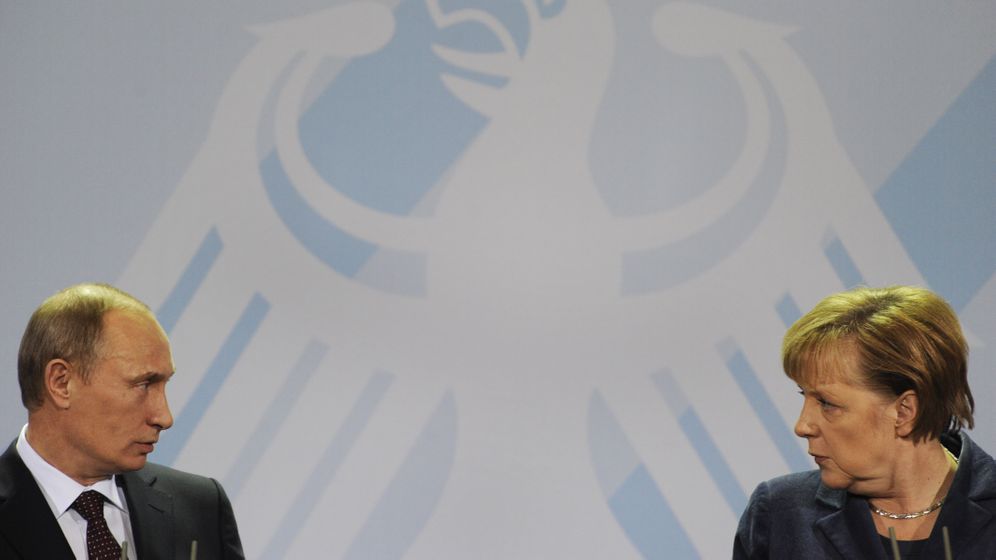 It was supposed to be a gesture of solidarity, a major public event: Russian President Vladimir Putin and Joachim Gauck, his German counterpart, working on a puzzle together in Moscow's Red Square, right outside the Kremlin's gates. Along with carefully selected guests, the two heads of state were to assemble the 1,023 individual pieces of the puzzle, an oversized copy of the self-portrait of German artist Albrecht Dürer, an iconic painting in European art.

But Putin lost interest in putting together puzzles. At first, the Kremlin called off a meeting planned for May that was supposed to kick-off the "German-Russian Year." And now Putin's office has informed Gauck that he doesn't have time for a meeting in June, either. Putin, the former KGB agent, doesn't want to offer Gauck, an ex-champion of freedom in communist East Germany, a spot in the limelight.

The cancellation of the puzzle event aptly reflects the current state of German-Russian relations. On Friday, Putin is expected in Berlin on an official visit. It will be his first trip to a Western country since being inaugurated as president for the third time on May 7 -- the message was intended as a positive one. But in fact, relations between Berlin and Moscow are worse than they have been in years.

Ties with Russia have traditionally enjoyed a special status in German foreign policy. Given the history of suffering, German governments see themselves as an important intermediary between Russia and its Western partners. Moscow, in turn, can only exert its influence in Europe via Berlin.

Yet despite being more dependent on each other than ever, Germany and Russia are steering toward a new ice age. With plans for the Nabucco pipeline in southern Europe on the verge of collapse, Germany continues to be dependent on Russian natural gas. For his part, Putin needs German investors if he wants to modernize his country's economy.

More Powerful than Ever

At the moment, the only thing doing well is trade relations. In 2011, German exports to Russia rose 34 percent to reach €27 billion ($34 billion), while imports climbed by 27 percent to reach €25 billion. Germany is Russia's second-most-important trading partner after China.

But the political situation looks different and Merkel and Putin have a strained relationship. On Friday, Germany's chancellor will be welcoming a guest whose political career is one she would have liked to see ended years ago. But now he's more powerful than ever.

Merkel had placed her bets on Dmitry Medvedev, whom Putin replaced as president. She thought he was capable of modernizing Russia and she had hoped he would run for re-election even though many experts thought it unlikely. Last September, when Medvedev and Putin, who was prime minister at the time, announced that they had agreed to trade offices long before, Merkel felt hoodwinked. She was forced to realize that the man she had placed such great hopes in was merely a Putin puppet.

Merkel was profoundly disappointed and there was an initial period of silence between the Chancellery and the Kremlin. Her low opinion of Putin was confirmed by accusations of ballot-box manipulation and smear campaigns against opposition figures during December's election for the Duma, the lower house of Russian parliament.

In the run-up to the presidential election in May, Merkel had a message delivered to Putin. In it, she told him that, as Russia's head of state, he should consider making a gesture signaling to the West that he was making a fresh start, such as releasing former oligarch Mikhail Khodorkovsky from prison. But Putin ignored the appeal.

Although Putin respects Merkel, he views her as being overly pro-American. Proof for him is provided by the failure three years ago of a deal which would have seen a Russian-led consortium buy a majority interest in Opel, the German carmaker owned by General Motors. Putin believes that Washington opposition is to blame for the sale falling through. Indeed, during a recent nationally broadcast question-and-answer hour with Russian citizens, Putin accused the Europeans of being little more than America's "vassals."

In recent days, Putin has again made clear what he thinks about the West: First, he didn't travel to Camp David in mid-May to attend the G-8 summit of the world's most important industrialized countries, and was then conspicuously absent from the NATO summit held in Chicago a few days later. Not quite a new Cold War, certainly, but a chilly peace.

The meeting in Berlin isn't likely to change the situation. No agreements are to be signed, as is usual for such meetings. Likewise, no progress will be made on contested issues, such as Moscow's call for the relaxation of visa restrictions, as neither Berlin nor Moscow has anything new to offer.

Of course, the Chancellery is aware that Germany remains dependent on Russia on several important issues, over and above energy supplies. Moscow's support will be needed in negotiations on Iran's nuclear program, and Russia's UN Security Council veto could be used to block any Western efforts related to the conflict in Syria.

But Merkel is no longer sure whether Putin is open to her arguments. A few weeks ago, she telephoned Putin to make it clear that Russia's behavior in the Syrian crisis was damaging to its own interests. She implored him to reconsider his stance -- but nothing has happened.

Merkel is now determined to pressure Putin in another way. She has arranged for a shake-up in the leadership of the so-called Petersburg Dialogue. This annual event was launched 11 years ago by Putin and then-Chancellor Gerhard Schröder to give both countries a forum for discussing social issues. Critics, however, believe that the Dialogue has devolved into a ritualized conference dominated by former politicians and Kremlin functionaries.

"We have to make it clear that we understand a partnership for modernization as involving more than collaboration in the energy sector," Schockenhoff says. Germany, he says, needs to support the rise of the Russian middle class, which showed with its public protests following the Duma election, he adds, that it is a genuine force for modernization.

The government is aware that the process is likely to be an arduous one, and no one is expecting any sudden successes. The Putin camp will most likely try to demonize opposition figures as agents of the West.

Berlin believes there is little hope that Russia's freshly installed government will bring about any real change. Putin has retained the conservative Sergei Lavrov as foreign minister, Merkel administration insiders note, and hardline Interior Minister Rashid Nurgaliyev has been replaced by Vladimir Kolokoltsev, the former Moscow police chief whose officers were brutal in their squelching of demonstrations.

Pretending to Be Strong

From the German perspective, leaders in Moscow still don't understand that Russia is no longer a global power and that it needs Europe as a reliable partner. The administration in Berlin views the Russian crusade against NATO's planned missile-defense system in Europe as a last, desperate effort at power-posturing -- Russia pretending to be strong because it is actually weak.

The Kremlin sees the situation differently. Not without some schadenfreude, Putin and his advisers view the West's influence on global politics as waning. They point out that, over the last 30 years, the EU member-states' share of the global economy has been steadily sinking. "Putin is convinced that the Western model already has the zenith of its global allure behind it," says political scientist Nikolai Slobin.

Nevertheless, Putin continues to believe that Germany has an important role to play. Traditionally, he has presented important foreign policy initiatives in Germany. In 2001, when speaking before German parliament, he described the goal of a "united and secure Europe" in which Russia and European countries would pool their resources. In an editorial contribution about his foreign policy principles published in the German daily Süddeutsche Zeitung before he visited Berlin in November 2010, Putin campaigned for a "harmonious economic community stretching from Lisbon to Vladivostok."

"Putin has noted, however, that his proposals haven't been answered," says Kremlin advisor Vladislav Belov. "Today, the West for him no longer has top priority."

More than his predecessor Medvedev, Putin has his sights set on the former Soviet states on Russia's borders. He has pushed through a customs union with Belarus and Kazakhstan, praising it as "an enormous single market of 165 million people with the free circulation of capital and labor." Putin's plan calls for the eastern economic club to become the nucleus of a "Eurasian Union," eventually to be joined by additional former Soviet states.

EU in the Way

The EU is also standing in the way of a rapprochement between Merkel and Putin. The Russian president views the political community as a weak entity that hamstrings itself with complicated decision-making processes. Russia wants good bilateral relations with Germany, and the EU only gets in the way.

Merkel, on the other hand, realizes that Germany, as the leading power in Europe, must also show consideration to the EU's smaller member states. For historical reasons, there continues to be a feeling of deep mistrust toward Moscow in Poland and the Baltics, which Merkel cannot ignore.

But it isn't just objective factors that are responsible for the German-Russian logjam. Personal ties have always played a major role in ties between Moscow and Berlin.

Chancellor Willy Brandt's swimming with Soviet leader Leonid Brezhnev near Yalta in 1971 paved the way for Germany's Ostpolitik policies aimed at normalizing relations and de-escalating Cold War tensions with the communist states of Eastern Europe. In July 1990, Helmut Kohl held talks with Mikhail Gorbachev wearing a cardigan; the wardrobe choice was intended to symbolize their close and trusting relationship. In 2001, Putin and Gerhard Schröder -- who are on a first-name basis -- took a horse-drawn sleigh ride through snow-covered Moscow.

Meetings between Merkel and Putin, on the other hand, are cold and businesslike. Merkel hasn't forgotten that Putin was stationed as a KGB officer in communist East Germany, where her pastor father had taken the family from Hamburg soon after her birth in 1954. Merkel saw the end of the Soviet Union as the prelude to freedom in the Eastern bloc, while Putin felt it was shameful.

Merkel is put off by Putin's displays of masculinity while hunting tigers or fishing with his shirt off (photos here). She has perceived his attempts to awe her as an affront. During a meeting at Putin's vacation residence in the Black Sea resort city of Sochi in January 2007, Putin allowed his black Labrador Koni to sniff his guest's pants (photos here). Merkel has been afraid of dogs since being bitten by one as a child. Putin only smiled.

Still, Putin has been impressed by the steeliness with which Merkel counters him. "Putin appreciates Merkel as a high-caliber and professional politician," says Belov, the Kremlin adviser. "He clearly views her as a heavyweight."

During an EU-Russia summit in May 2007, Merkel and Putin had a heated exchange about human rights in front of the cameras. When Putin visited Berlin in January 2009 during the high point of the dispute between Russia and Ukraine over natural gas supplies, Merkel lectured Putin like a schoolmistress. "She scolded me," Putin later said, half ironically and half appreciatively.