The wilds of Germany may not have been off-limits to Roman legions, archaeologists announced on Monday. At a press conference in the woods near the town of Kalefeld, about 100 kilometers south of Hanover, researchers announced the discovery of a battlefield strewn with hundreds of Roman artifacts dating from the 3rd century A.D.

Finding evidence of Roman fighting forces so far north is surprising, the archaeologists say. Germany was once considered prime territory for Roman conquest. But in A.D. 9, thousands of Roman legionaries were slaughtered in a forest near modern-day Bremen.

"We thought that with the Battle of the Teutoburg Forest, the Romans gave up on this region and pulled back behind the limes," or frontier fortifications further south, says Henning Hassmann, the Lower Saxony Conservation Department's lead archaeologist.

But evidence found in woods outside the small town of Kalefeld may force historians to take a new look at the Roman presence in Germany. More than 600 artifacts, ranging from axe heads and wagon parts to coins and arrowheads, have been found on a forested hill called the Harzhorn. So far, the artifacts indicate that Roman soldiers fought a battle on top of the hill.

The site first came to light in the summer of 2000, when local metal detector hobbyists found some pieces of metal while looking for a medieval fort. The fragments languished for years, until the men finally decided to turn them in to Petra Loenne, the Northeim area archaeologist.

Loenne immediately recognized an unusual tangle of metal. Called a "hippo-sandal," it was a sort of early horseshoe that was wrapped around the hoof of a horse or draft animal. "It definitely wasn't medieval," she says. In fact, it was Roman  but as far as Loenne knew it had no place in Lower Saxony, hundreds of miles north of the Roman frontier.

Loenne quickly assembled a team of archaeologists and historians  and local metal detector hobbyists with good connections to the archaeological authorities. Her priority was to locate any more artifacts close to the surface as quickly as possible. "We had to hurry and excavate before word got out and looters arrived," Loenne says.

Over the course of three months, they found a Roman-era battlefield spread over more than a mile of dense German forest. Standing under towering pines on Monday, Loenne said the battlefield may be one of the largest ever discovered intact from that era.

Metal detector hobbyists working under the watchful eye of Loenne and her team located over 600 metal objects, from Roman sandal nails to arrowheads and six-inch long iron spear points that once capped javelins fired from ballistae, a sort of giant crossbow. 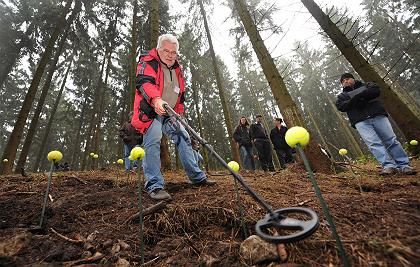 The battlefield is located on top of a wooded hill. The poles with tennis balls stuck on them show where artifacts were found.

After the press conference on Monday, the local fire department ferried visitors up a muddy dirt road to the hilltop. Snow still clung to the forest floor, which was pocked with tiny craters where archaeologists had dug holes.

The steep face of the hill was studded with tennis balls on spikes, each one marking where an artifact had been found. The center of the hill was covered with neon-green balls, each one marking where a ballista's javelin had landed; a few balls painted blue and green marked spear and arrow points. Archaeologists found eighty percent of the points were found oriented in the same direction. The rest may have bounced off of trees  or barbarians  and landed pointing in a different direction.

Along the ridge on either side of the hilltop, dozens of tennis balls painted red support the argument. The red balls mark where Roman sandal nails came loose. After archers and artillery launched their weapons towards the defenders on top of the hill, the archaeologists think Roman legionaries may have swept in from either side to finish the job.

"It took half an hour or an hour at most, but it's preserved like it was frozen in time," said Michael Geschwinde, an archaeologist at the Lower Saxony Conservation Department who participated in the dig. "For an archaeologist, it's amazing to be able to explore this moment."

The layout of the battlefield contains yet another tantalizing clue: The Romans attacked the hill from the north, suggesting that they were on their way home from a mission even further into German territory. Geschwinde said there may have been about a thousand men on the Roman side, perhaps including auxiliary archers and spear-throwers from the empire's provinces in Africa and the Middle East.

At least one arrowhead still contained enough of the original wooden shaft to provide organic material for radiocarbon dating, which place it some time in the 3rd century A.D. Coins and other objects support the idea that the battle may have been fought some time between 200 and 250 A.D.

There is sketchy evidence in the histories for some sort of Roman push into German territory in the 3rd century. Historians like Herodian say the Emperor Maximinus Thrax declared war on the Germans, but this is the first evidence he may have actually carried out his threats. "From what sources say, he did push into Germany," says Eric de Sena, an archaeologist at John Cabot University in Rome. "In a way it seems to correspond with the histories."

The specialized artillery and hundreds of Roman sandal nails found atop Harzhorn Hill is a good indication the combatants were Romans, not barbarians using Roman weapons. Roman artifacts have been found as far north as the Baltic Sea, but have usually been dismissed as trade goods. "Roman sandals on German feet doesn't make sense, at least not in that amount," says Friedrich Lueth, head of the German Archaeological Institute's Roman German Commission. "At this late stage, it's quite surprising to see them so far north."

The site was under wraps until Monday to protect it from looters, but Loenne says full-scale excavations will commence in March to dig deeper into the mystery of Harzhorn Hill.