A German bishop who faces accusations of gross extravagance for building a new residence six times more expensive than budgeted took a low-cost Ryanair flight to Rome on Sunday for what is widely expected to be a dressing-down by the Vatican.

Franz-Peter Tebartz-van Elst, 53, the bishop of Limburg in western Germany, faces calls to step down for presiding over a project that was originally estimated to cost €5.5 million and could now end up costing €31 million ($41.9 million) or more.

He had previously been accused of maintaining an extravagant lifestyle and was criticized for taking a first-class flight to visit the poor in India. Prosecutors in Hamburg last week accused him of making false statements in a civil lawsuit he brought against SPIEGEL for reporting about that India flight.

The controversy surrounding him threatens to further damage the reputation of the Catholic Church in Germany following a series of child abuse scandals at Catholic and Protestant schools and institutions in recent years.

The extravagance on display in Limburg also runs counter to the style of the pope, who has explicitly shunned pomp and the trappings of papal power since his election in March, living in the Vatican's guesthouse rather than in the Apostolic Palace.

The damage is already making itself felt in a decline in donations to Caritas, the charity of the Catholic Church, the president of the German Caritas association, Peter Neher, said on Monday.

Neher told Deutschlandfunk radio that many former donors had written letters saying they had been deterred by the behavior of Bishop Tebartz-van Eltz.

The head of the Catholic Church in Germany, Archbishop Robert Zollitsch, has also travelled to Rome and is due to meet the pope this week. "We have a tremendous credibility problem." Zollitsch told Bild newspaper. "And the Church in Germany is being damaged."

The bishop of Trier, Stephan Ackermann, said on Sunday that Tebartz-van Elst should resign. "The situation has escalated to such an extent that one has to say Bishop Franz-Peter basically can't go on working in Limburg. A bishop needs acceptance."

Even Chancellor Angela Merkel has expressed concern. Her spokesman said on Monday that the controversy was a "major burden" for the Catholic Church.

Asked to comment on the talks due to take place in the Vatican this week, her spokesman said: "It's of course not up to the German government to give advice. But I can express the hope that there will be a solution for the faithful, to restore people's confidence in their church."

Fresh accusations were levelled against the bishop over the weekend when the architect who designed the residence, Michael Frielinghaus, said the bishop knew back in 2010, when the project was announced, that the stated cost of €5.5 million was too low.

He knew from the beginning "what costs he would be facing," Frielinghaus told Süddeutsche Zeitung newspaper. The true cost was never in doubt. "So there was no cost explosion. The construction ran according to plan. There were hardly any surprises."

The bishop and his staff knew "that the construction costs would actually be 31 million euros," Frielinghaus added. If that statement is true, it would mean that the bishop misled the public, many of his staff and financial controllers for years about the true costs of the project.

Tebartz-van Elst said last week that the total price on his new headquarters had reached €31 million.

SPIEGEL reported in its latest edition published on Monday that the auditing firm KPMG regularly informed Tebartz-van Elst about the cost situation.

"I'm here because I don't want my faith to be destroyed," said one elderly woman. One man said: "I pray for our bishop to be healed of his megalomania."

One man in a wheelchair pointed out that there was no wheelchair access either to the cathedral or even to the square in front of the cathedral, which had a 30-centimeter step. "It would only cost a few hundred euros to change that. There's no money for that, but there is for €15,000 bathtubs."

In fact, members of the Catholic community have collected €10,000 to make the cathedral accessible for prams and wheelchairs. That money didn't come from church coffers, though.

The Limburg bishopric said in a statement on Sunday that Tebartz-van Elst was fully aware "that the decision on his service as a bishop in Limburg lies in the hands of the Holy Father." It is unclear when the talks in the Vatican will take place. 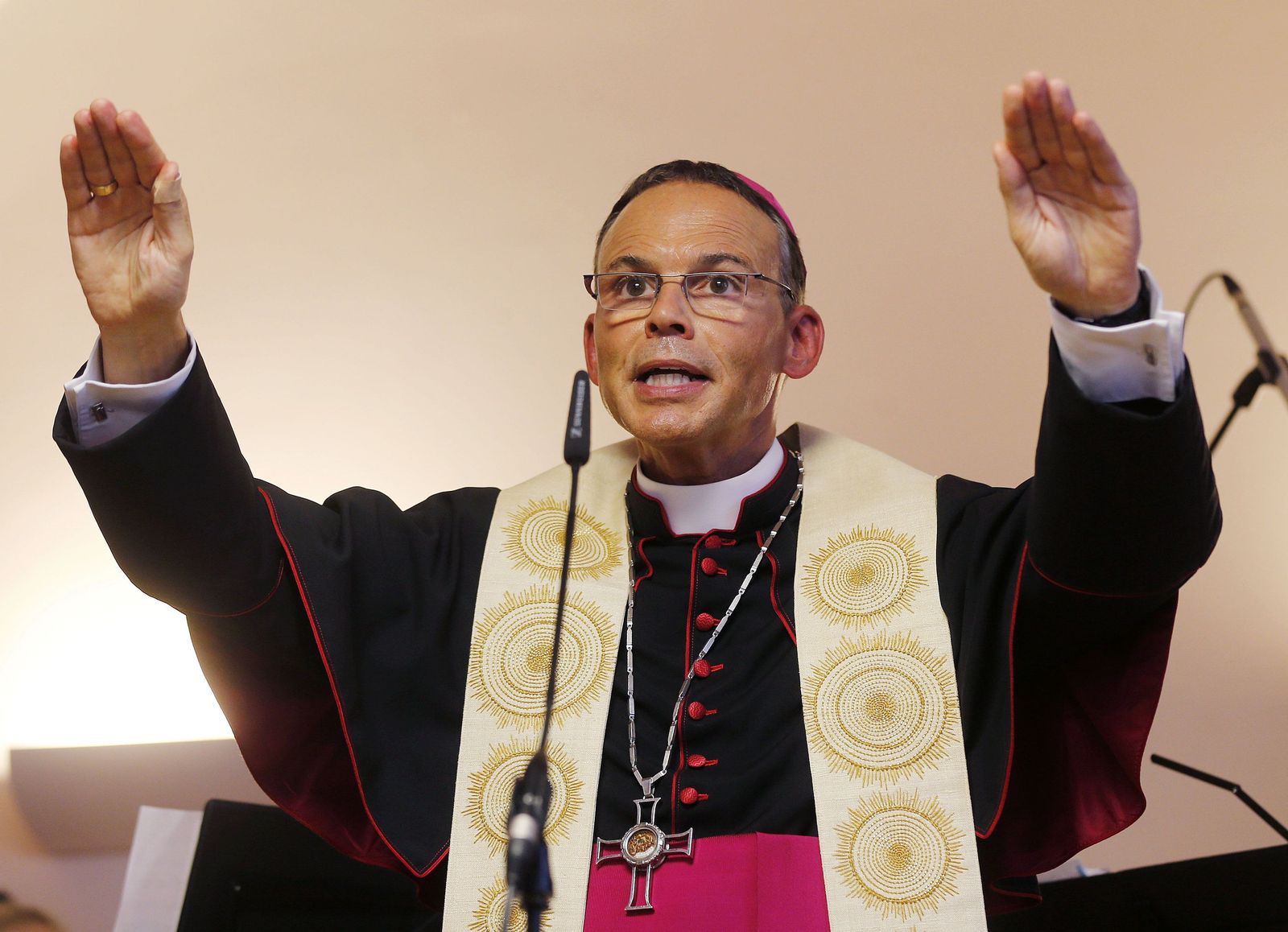 Under fire: the bishop of Limburg, Franz-Peter Tebartz-van Elst.