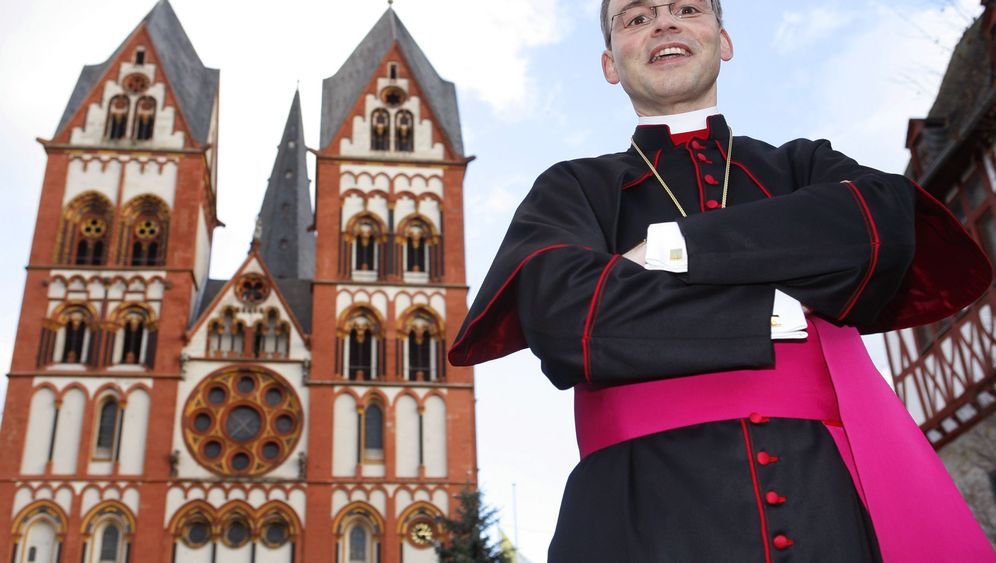 The Catholic bishop of Limburg, a small city in western Germany, apparently had noble motives when he boarded a plane to India with his vicar general in mid-January. "We were there to support social projects in and around Bangalore," Franz-Peter Tebartz-van Elst reported after his return. They wanted to help children "who worked breaking stones," he added.

But this man of God didn't just want to do something good for the poor. He also wanted to do something nice for himself. On the upper deck of a jumbo jet, he and Vicar General Franz Kaspar had made themselves comfortable in the plane's first-class section, which offers such amenities as champagne, caviar and a bed. "Traveling first class means you should always be able to expect the extraordinary," Germany's Lufthansa airline, which Kaspar flew with, promises.

Traveling first class to the slums? That's even difficult for this status-conscious church dignitary, who holds both Lufthansa "Senator" and frequent-flyer cards, to explain. ("Senator" status with Lufthansa requires at least 100,000 annual status miles.)

The clerics also enjoyed first class service on the flight home. The total value of the ticket price and mileage upgrade for the outbound and return flights for both men: roughly €7,000 each.

Bishop Tebartz-van Elst, 52, doesn't only embrace luxury when he travels to India to visit poor children and nuns. He also puts a premium on a pleasant standard of living back home in Limburg, one that befits his status. His new, multi-million-euro bishop's residence right next to the city's cathedral is about to be finished. But the complex has sparked a mix of amazement, rage and resignation among the 600,000 Catholics in the diocese. Many cannot comprehend how they are supposed to live in want while their bishop splurges.

Tebartz-van Elst preaches to his flock to sate their thirst with water not wine. "Renewal begins where the efforts toward making due with less are made," he has instructed them. "The person of faith is dirt poor and rich in mercy," he once said in a Christmas sermon. And on the Assumption, he declared: "Whoever experiences poverty in person will discover the true greatness of God."

Meanwhile, funds are tight or insufficient across the diocese. There isn't enough money for the upkeep of churches, parishes are being consolidated and funding for Catholic day care centers is being slashed. All of this is part of the bishop's tough cost-cutting measures.

Ever since construction on the bishop's complex began and the extent of his ambitions became known, the atmosphere among Limburg's Catholics has been poisoned. Indeed, the contradictions between the bishop's words and his lifestyle have enraged many believers. One member of the cathedral's choir loudly voiced her anger immediately after a mass. "Many church communities don't know where they are going to get the money to pay to heat their churches next winter or to make urgently needed repairs to their church roofs," she said.

In the bishop's new complex, however, hardly any wish has gone unmet. Still, the congregation hasn't been able to learn much about the luxurious residence, which bears the humble name of the St. Nicolas Diocese Center.

Men in red T-shirts immediately appear whenever one approaches the construction site. "No photos!" they warn passersby, even though one can still make out very little from behind the high brick wall.

Workers on the mystery-enshrouded construction site keep quiet as if they'd been forced to swear a vow of silence. Members of Limburg's building board haven't even been allowed to take a quick look at everything. And county council officials haven't been able to check on any of the rumors that have been circulating in the city. Taken together, these hold that the complex boasts dedicated rooms for reliquaries, a sauna, a fireplace, a wine cellar, gemstone detailing, statues of holy figures and a heatable roof that can protect the bishop's private chapel from snow and ice.

The bishop says he knows nothing about all this secretiveness. He says he didn't order it, that it doesn't exist. Speaking through his lawyer, he adds: "There is nothing to hide on the construction site." The document goes on to say that there will be no sauna, wine cellar or precious stones, and that the heatable roof had only been "contemplated" for safety reasons, but will not be installed.

Nothing But the Best

Tebartz-van Elst's predecessor, Franz Kamphaus, lived in a markedly different way. He once moved into modest lodgings in a seminary for priests so that asylum-seekers could be housed in the bishop's residence. Although the elements of the new property are built close together, the current bishop will still have plenty of space for contemplation and ostentation. Indeed, the difference between a shepherd who is close to his flock and a church dignitary enamored of his status could not be greater.

Although the cathedral lies just a short walk away, the new estate has a private bishop's chapel that looks like a jet-black monolith. The building has appalled local residents, architects and historical-preservation officials alike. People in the city have already come to disparage it as the "Kaaba of Limburg" because some think it resembles the huge sacred cubical stone structure in Mecca.

A small park has also been built for the bishop. In the evenings, Tebartz-van Elst will now be able to stroll through the designer garden while reading his breviary.

All of the structures on the property are linked by corridors and underground passageways, which the bishop's lawyers say are for "logistical reasons." Workers had to spend weeks under the most trying conditions drilling into the bedrock and pouring a huge amount of concrete.

Of course, the plans also envision a library, guestrooms and a room for storing precious reliquaries. A wood-burning stove in the living room adds to its coziness, and expensive construction materials have been ordered. Still, the bishop stresses that "only native materials" have been used, such as limestone from Bavaria, slate from the Mosel region and wood from central Hesse.

While in Rome for the birthday reception of Pope Benedict XVI, people were puzzled when Tebartz-van Elst said that his new, 120-square-meter (1,300-square-foot) quarters only cost €200,000. But his figure ignores the costs for the reception rooms, chapel, offices and rooms for his driver and the two nuns who assist him. The entire complex reportedly costs at least €5.5 million, and the diocese says that it will pay for anything exceeding that amount itself. The current bishop and his chief administrator, the vicar general, have sole oversight over the diocese's assets. Hardly anyone in Limburg knows its true wealth, and financial authorities haven't looked into it.

The bishop has also tried to deflect criticism by claiming that the decision to build the complex was made before his time. But there are indications that this is not the case. Kamphaus stepped down as Limburg's bishop on Feb. 2, 2007, and the position remained vacant until the end of the year, when the pope appointed Tebartz-van Elst to head the diocese. No decisions like this one could have been made during this interim period, and members of the diocese board say that concrete planning for the complex didn't begin until December 2007 -- and that it was designed according to Tebartz-van Elst's wishes.

Limburg's Catholics don't want to follow their bishop anymore. Berthold Nebgen, 69, the longest-serving acolyte at the cathedral, says the bishop himself has "lost all sense of reality." He calls the bishop's private chapel an "eyesore in the heart of the old city," thinks it is "ugly and unneeded" and says it drives "a black wedge between the diocese leadership and the population." He now says he intends to stop performing "all services for the church."

Sigrid Grabmeier, the spokeswoman for the German branch of the international We Are Church initiative, which advocates reforms in the Catholic Church's authority structures, says that the bishop "has apparently lost all sense of the external effects" of his actions.

Opinions about Tebartz-van Elst are also divided among the priests under his control. Huburtus Janssen, 74, a well-known priest in the city, say that "the church's members have a right to transparency."

Frank Speth, a local politician with the center-left Social Democratic Party and a Catholic religion teacher, has also come to sense just how heated the mood has gotten. He received a letter criticizing the diocese's "parallel world of well-filled coffers and secret assets." The very next day, his mailbox held a postcard apparently written by a fanatic supporter of the bishop. It addressed him as "little Frank" and said he wouldn't dare to criticize the Catholic Church if he belonged to a different religion -- because then he would have to "seriously worry about getting a knife between the ribs." 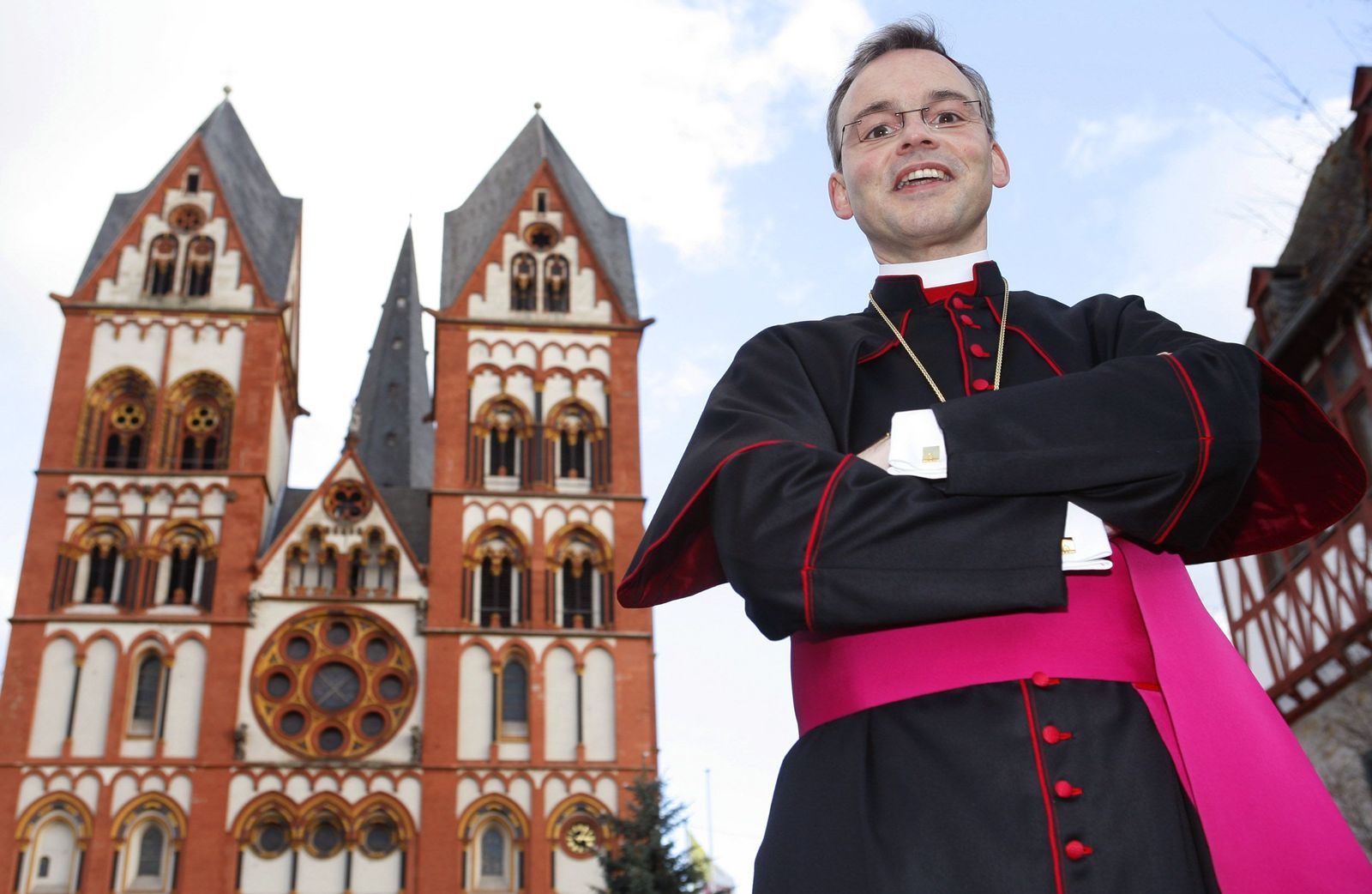 Franz-Peter Tebartz-van Elst, 52, is the bishop of Limburg, a small city in western Germany near Frankfurt. The diocese is made up of roughly 600,000 Catholics.