As the debate over National Security Agency spying heated up in recent weeks, Angela Merkel largely remained silent. On Wednesday, though, the German chancellor gave her first personal comments yet on the controversial surveillance by United States intelligence, and allegations that the agency has partnered with its German counterparts on the secret activities.

In an interview with the weekly Die Zeit, Merkel defended German intelligence services and the surveillance of telecommunications under certain circumstances.

Preventing terrorist attacks is not possible "without the possibility of telecommunications monitoring," she told the paper. "The work of intelligence agencies in democratic states was always vital to the safety of citizens and will remain so in the future."

While the accusations against the NSA must be thoroughly clarified, Merkel urged those debating the issue to remember, along with "the more than justified questions, that America is and has been our truest ally throughout the decades and remains so."

German Interior Minister Hans-Peter Friedrich, who is traveling to the US on Thursday to meet with officials in President Barack Obama's administration, also commented on the issue. He told SPIEGEL ONLINE on Wednesday that it "annoys" him when some in Germany immediately criticize the US without having exact knowledge of the situation.

"That is not fair," he said. "Without the information from the US and the good collaboration with the intelligence agencies, we most likely would not have been able to prevent terrorist attacks in Germany."

Friedrich said he has two goals for his trip, which reportedly includes a meeting with US Attorney General Eric Holder. First, he wants to express that the situation is being taken seriously in Germany, and that the shaken trust needs to be built up again. "Second, I want to make very clear what we should expect, and must expect, from each other as partners and friends," he said.

Friedrich said he wants to speak openly during his trip to Washington. "Friends must be able to speak directly with one another," he said. "That includes our view that a comprehensive surveillance of the content of communications is in no way proportionate."

In the Die Zeit interview, Merkel said that reports about the NSA's so-called Prism spying program still need to be addressed, and rejected suggestions that the agency's methods were comparable to those of the feared East German secret police, the Stasi.

"For me, there is absolutely no comparison between the Stasi in East Germany and the work of intelligence services in democratic states," she told the paper. These are "two totally different things, and such comparisons only lead to a trivialization of what the Stasi did to the people in East Germany."

Merkel stressed that she had only found out about the surveillance program "through the current reporting" on the topic. Similar claims have been made by two ministers who should be well-versed in the activities of Germany's intelligence agencies: Interior Minister Friedrich and Justice Minister Sabine Leutheusser-Schnarrenberger.

Since the spying scandal first broke, however, the opposition has openly questioned the notion that the German government was unaware of the American and British surveillance programs. That they know more than they are admitting would seem to be further bolstered by an interview with American whistleblower Edward Snowden in the current issue of SPIEGEL, in which he says that the Germans and the NSA are "in bed together."

Sigmar Gabriel, head of the opposition, center-left Social Democratic Party (SPD), sharply criticized Merkel's latest statements about the NSA scandal. "I find it outrageous that the chancellor just shrugs and accepts that the American and British are evidently violating the basic rights of millions of Germans," he told SPIEGEL ONLINE after Die Zeit released quotes from the Merkel interview in advance of its publication.

In the Die Zeit interview, Merkel calls attention to the responsibility of the coordinator of Germany's intelligence agencies. To the question of whether she personally reads the reports sent by the agencies, she says that the duty falls to her chief of staff, Ronald Pofalla. "For a long time there has been someone in the Chancellery who coordinates with the intelligence agencies, either a minister or a senior member of staff," she said.

Here, too, Gabriel had critical words for the chancellor. "It appears that Ms. Merkel is now trying to shift political responsibility to her chief of staff," the SPD leader said. "That's an old game -- not knowing anything at first, trying to play down the problem and then finally pointing the finger at a staff member. But it's not going to work because it's clear that the dimensions of this scandal are so great that no person other than the chancellor can ensure that basic rights are defended in Germany."

So far, Merkel's center-right governing coalition has emerged from the spying scandal relatively unscathed. According to a recent survey by German pollster Forsa, the opposition SPD and Green Party continue to lag significantly behind.

Although this is the first time Merkel herself has commented on the surveillance controversy, her spokesman Steffen Seibert made remarks on the matter to reporters last week. "The monitoring of friends -- this is unacceptable. It can't be tolerated. We're no longer in the Cold War," Seibert said on the chancellor's behalf, referring specifically to allegations that the NSA bugged European Union missions in New York, Brussels and Washington. 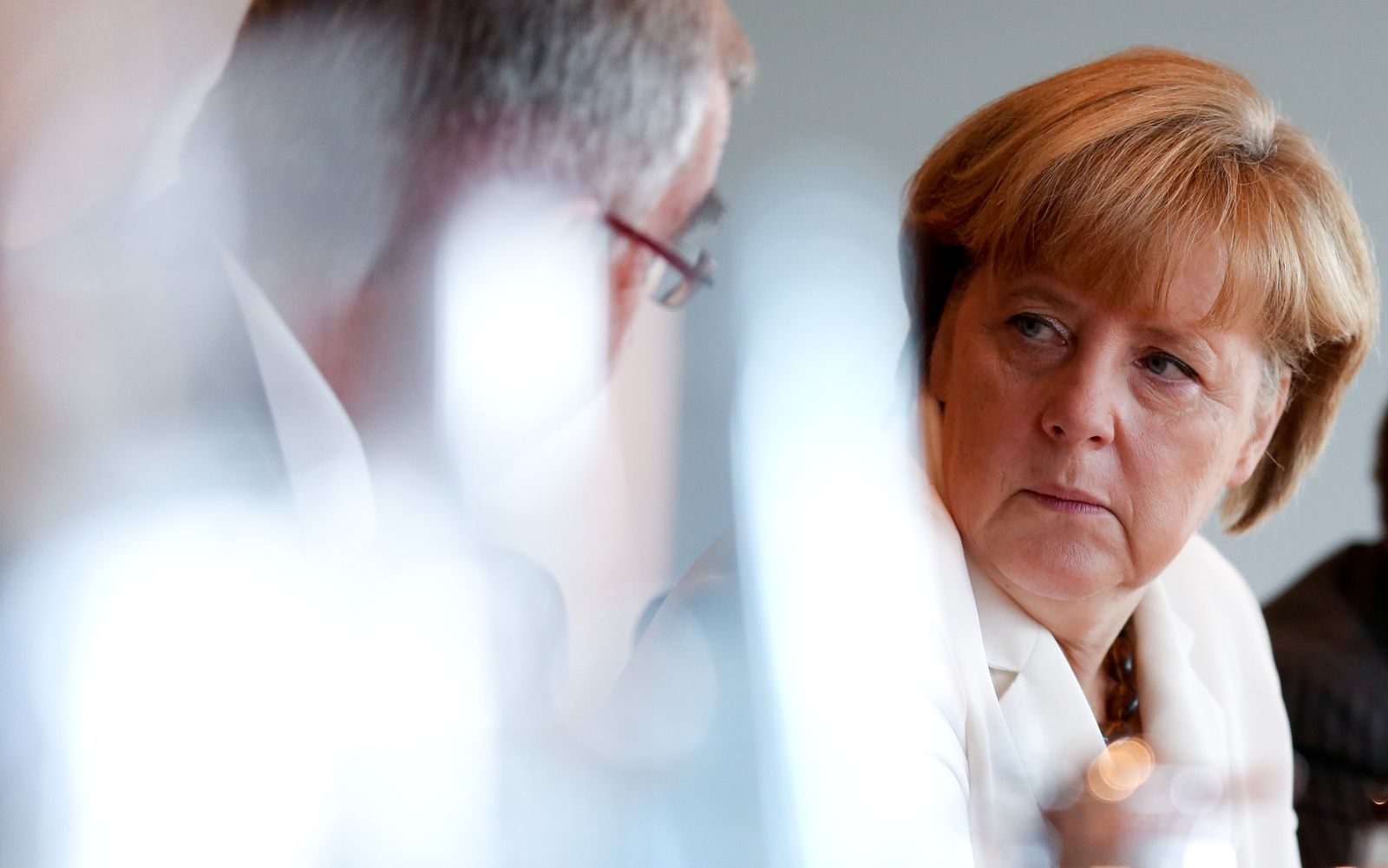