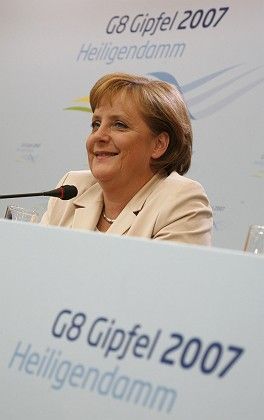 Shortly before Angela Merkel strides into the press center in Heiligendamm, George W. Bush and his wife Laura stand on the tarmac at Rostock-Laage airport. The president looks a little pale. He wasn't able to take part in a morning session with the African heads of state and government because of a stomach ailment.

Bush thanks the ground staff and then climbs up the gangway. A last wave by the most powerful man in the world, then the light blue door of Air Force One eases shut.

The Heiligendamm G-8 summit is over.

Meanwhile in the press center, the German chancellor declared the meeting a success. "Far-reaching decisions" were taken, says Merkel. She stresses one issue above all: the agreements on climate change.

The summit gave a clear instruction to negotiate on the basis of a UN mechanism, she said. Even the leaders of developing and emerging economies who joined the summit on Friday had made clear that they felt committed to the process, she added.

The chancellor looks tired. She has just completed a marathon program: the first day was filled with bilateral meetings with some of the G-8 leaders, then a meeting with rock stars and Africa activists Bob Geldof and Bono. The G-8 working sessions followed on the second day; and on Friday she hosted the reception for the guests from Africa and the emerging countries.

Savior of the Summits

And all Merkel's efforts have paid off. Not only did her party, the Christian Democratic Union, praise her "sterling achievement," but the reaction in the German media has been overwhelmingly positive. The tabloid Bild, with characteristic exaggeration, crowned her "Miss World" -- the woman who tamed the men.

The climate change compromise was regarded -- despite the lack of binding targets for CO2 reduction -- as progress by most media commentators. It was also seen as a personal triumph for the chancellor, who successfully managed to stay in the saddle during the climate rodeo with Bush.

Hence there is a certain feeling of déjà vu about Heiligendamm. Merkel is gradually getting a reputation as a summit savior. In Brussels she was twice able to lead deadlocked negotiations to a successful conclusion -- the other EU leaders were clearly unable to resist her combination of charm and obstinacy.

She will certainly be envied for her achievements at home, particularly by her coalition partners, the Social Democratic Party (SPD). The climate compromise cannot really be described as a "breakthrough," grumbled SPD general secretary Hubertus Heil, thereby summarizing the mood among his comrades.

The harshest critics of Merkel's compromise turned out to be the opposition and non-governmental organizations. "In a way not ever seen before in the history of the summit, Heiligendamm made it clear that the G-8's time has passed," the globalization critics at Attac commented, giving their assessment of the conference.

The only thing that still happens at the summit, the group claimed, is "political marketing." Tobias Münchmeyer, a climate expert at Greenpeace, said the summit "largely failed." Nevertheless, he admitted that Merkel had succeeded in parrying the US initiative to create its own climate conference -- a move that would have damaged the UN process.

So what's left from Heiligendamm? Merkel herself has reacted casually to the criticism. Of course "not all the world's problems can be solved" after only two days, she said -- but a "good deal" of progress had been made.

In addition to the climate change compromise, which will see the US return to UN climate talks, the newly dubbed "Heiligendamm Process" will be one of the summit's key achievements. The process will institutionalize talks between the G-8 and the five most important emerging economies, known as the O5, namely China, India, Brazil, Mexico and South Africa. Until now, talks between the two groups happened sporadically, but now the G-8 and O-5 will meet regularly.

Merkel also reaffirmed her opposition to expanding the G-8 to become a G-9, G-10 or G-13. Instead, the Heiligendamm Process would be the first step towards better integration of other important countries. The message from Heiligendamm to the five emerging economies, she said, is that "we can not get by, or shape globalization in a humane way, without each other," Merkel said.

Merkel also coldly countered the accusation that, as far as Africa was concerned, all the leaders did was dust off the old promises from Gleneagles. "The sense of the G-8 can not lie in setting new goals every year," said the chancellor. Rather, it is necessary to implement the old goals, she said. And incidentally, the Africans had not even demanded new goals. In 2005, the G-8 at Gleneagles had committed themselves to double development aid for Africa by 2010.

At the end of the summit, Merkel was asked why the Irish rock star Bono had left Heiligendamm apparently depressed. The chancellor initially said that she did not believe Bono was so depressed. But then she summarized the dilemma of the G-8. "Sometimes it is easier to make promises than it is when you have to worry about putting those promises into practice afterwards," she said.

Hence she wasn't able explain to Bono how the G-8 would be able to reach the target of doubling aid by 2010, Merkel said. After all, she didn't even know the 2009 German budget yet. But she had told him that she would make every effort to make it happen: "And he accepted that."