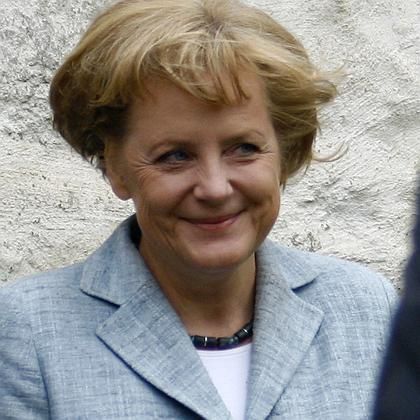 German Chancellor Angela Merkel: More popular abroad than most other politicians in her league.

She may be under fire for the inability of her grand coalition government of conservatives and social democrats to push through much-needed reforms in Germany, and critics here may say that her government's foreign influence is waning, but German Chancellor Angela Merkel's firm negotiating hand appears to be paying dividends abroad. A poll released this week shows the German leader to be one of the world's most trusted politicians when it comes to foreign policy.

The poll shows Merkel enjoying a high degree of popularity in Europe. Of three European leaders assessed in the poll -- the German chancellor, Sarkozy and Putin -- Merkel received the highest ratings in terms of foreign policy.

In Germany, 76 percent of those polled said that they had faith in Merkel's foreign policy decisions. But she enjoyed even greater support in France, where 84 percent said they viewed the chancellor's work abroad in a favorable light. In Britain, she enjoys the support of 53 percent; and in Spain, 51.

But compared to just one year ago, Merkel's favorability rating has fallen in the poll in both Germany and Britain. In her home country, she polled 85 percent in 2007 compared to 76 percent in 2008, while in the United Kingdom she slipped from 62 to 53 percent.

The only countries where Merkel had the support of less than 50 percent of the population were Poland and Turkey. With post-war tensions still flaring occasionally between the two countries, over 40 percent of Poles had a negative impression of Merkel. And in Turkey, whose full membership in the European Union has been opposed by Merkel, 68 percent of respondents said they harbored doubts about the chancellor.

Percent in each country who say they have a lot or some confidence in said leader to do the right thing in world affairs.
Remaining percentages: Negative opinion/Don't know
Source: Pew Global Attitudes Project

Outside Europe, views on Merkel are mixed. In the United States, only 39 percent said they had faith in her foreign policy, but that was still higher than Sarkozy (37) and Putin (28). In Australia, 48 percent are impressed with Merkel's foreign policy; in Japan that figure is 47 percent.

But in China, where Merkel has drawn criticism for meeting with exiled Tibetan Buddhist leader the Dalai Lama, 33 percent reject her foreign policy and 40 percent have no opinion about it whatsoever.

She hasn't made much of a mark in India, either, where 18 percent have a positive view of her, versus 28 percent who see her in a negative light. More than half of the respondents there said they had no view of her.

More in Europe Have Confidence in Obama's Foreign Policy than McCain's

Percent in each country who say they have a lot or some confidence in said leader to do the right thing in world affairs.
Source: Pew Global Attitudes Project

The poll covered a broad range of global issues, including the presidential election season currently underway in the US. When asked if they felt the presidential candidate would "do the right thing when it came to world affairs," a full 82 percent of respondents in Germany said they had faith in Democrat Barack Obama vs. 33 percent for Republican John McCain. Those figures were similar for France, where 84 percent said they have confidence in Obama and 33 percent in McCain.

When asked if they had confidence in current President George W. Bush, only 14 percent of Germans, 13 percent of French and 8 percent of Spaniards responded with a "yes" answer. Majorities in France (68), Spain (67) and Germany (64) said they felt US foreign policy would improve after the election. The poll also found that half or more of Germans and Brits are closely following the election campaign. The figure was slightly lower in France (40) and Spain (25).

Most of the respondents surveyed in the poll, also said they believe that China will eventually replace the United States as the world's leading superpower -- Germany (52), Spain (52), France (51), Britain (48).