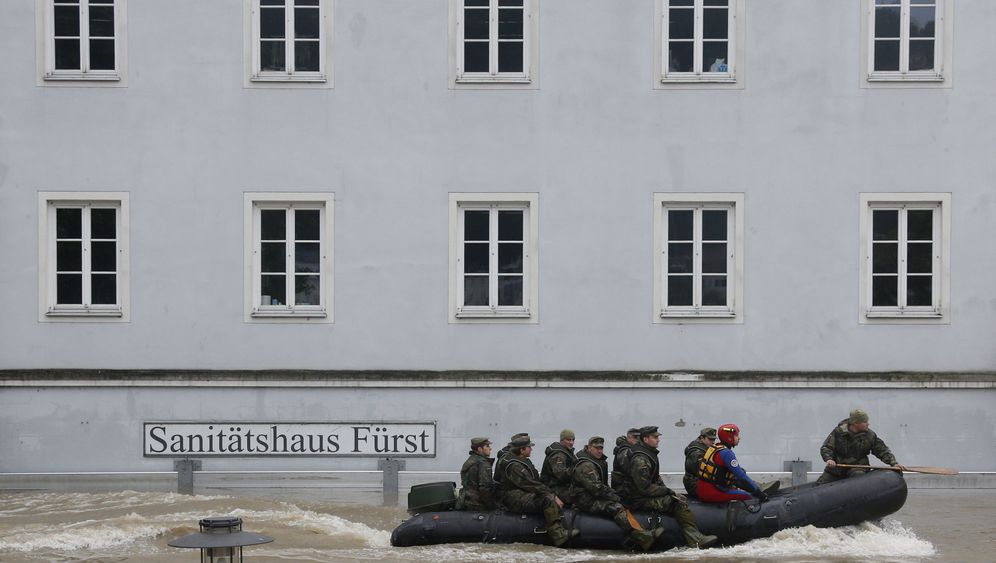 Photo Gallery: Merkel and the Army Battle Floods in Passau

Inside Resch, a shoe shop in the center of Passau, the colorful spring collection floats in brown water, while next door Fritz Uhrmann sits in his third-floor apartment and refuses to be evacuated. He also wants the soldiers to leave. Since Monday evening they have been navigating Passau's streets, which now look more like canals, in rubber boats.

The flooding in recent days is the worst that this historic Bavarian city has seen in 500 years. But the full extent of the damage won't be clear until the water recedes. "The worst is yet to come," says Lt. Col. Thorsten Klapp, who is with the contingent of 150 Bundeswehr soldiers who were sent to help fight the flood.

Many bizarre scenes are playing out in the "City of Three Rivers," which is usually so proud of its location right where the Danube, Inn and Ilz rivers meet. Streetlights are bobbing on the water surface like buoys and an abandoned, half-submerged car is blinking furiously, its alarm system triggered by its movement in the water.

Three men are taking a break on their balcony in the midst of the bustle and confusion, raising their glasses at passing soldiers in dinghies as if there has never been a better time to enjoy a bottle of wine. They are among the few people who decided to stay in their homes despite the raging flood and power outages.

'That Scared Me a Bit'

A 70-year-old man who lives alone is carried down the stairs from his apartment and lifted into one of the boats. "My landline wasn't working any more and I don't have a mobile phone," said the pensioner. "That scared me a bit." Concerned relatives alerted the rescue service.

The Federal Agency for Technical Relief, the German Red Cross, the Water Rescue Department, the Catholic aid organization "Malteser," the fire department and the German military have all rushed to the city to help in the emergency. Helicopters carrying sandbags to build dams are flying overhead, police cars are rushing through the streets with flashing blue lights and water rescue department teams in wetsuits are pushing dinghies into the water.

In the midst of the chaos there's still room for curious onlookers, though. They are crowding the partially flooded Fritz-Schäffer-Promenade as if there never had been a better place to see and be seen. A woman walks her little lap dog, which is well-protected from the rain with a plastic hood. The owners take a few snapshots of each other -- a couple in front of drowning city. "Horrible," says Lt. Col. Klapp, referring to the gawkers.

'We Want to Help'

But there are other kinds of people too, like the married couple with the small child who have come to help out in a festival hall that has been converted into a disaster relief center. "We want to help," they say. Or like the students who are piling up sandbags in the city center to stop the water from flooding shops like the clothing store owned by Willi Zacharias.

"On Sunday at 5 o'clock in the afternoon there was no water here," says Zacharias. Now his cellar is full of it. He estimates the damage to his store will reach six figures. "And I'm better off than them," he says, pointing to buildings that have suffered even more damage.

But at least the water levels won't keep rising in Passau. By Monday night, the Danube had risen to more than 12.8 meters (42 feet) the highest since records began, but it has receded slightly since then. It's expected to fall to slightly over 10 meters by Tuesday afternoon.

There's still a lot to do for people like Andreas from the water rescue service. He was literally up to his neck in water for what felt like ages on Monday evening while he helped push boats against the current into the old town. Even though it was exhausting work, he retained a sense of humor. On the way back he could have climbed into a boat but decided to swim. "Anything else would look uncool," he says.

Situation Still Critical in Some Areas

In other areas of Bavaria, the flood waters are also receding, as they are in the eastern sate of Thuringia. But in the neighboring state of Saxony, the situation remains critical. The old town of Grimma is under meters of water and can only be navigated by boats. In the area surrounding the city of Leipzig, some 6,000 people had to be evacuated.

Authorities are also worried about the Elbe River, which is still rising. In Dresden, one of the bridges across the river has already been shut to traffic. Shortly before midnight it reached 7.08 meters, and is expected to peak at nine meters. In the disastrous flood of 2002, it reached 9.40 meters. But a spokesman for the city's crisis management authority said the old town was unlikey to be flooded this time around.

In the state of Saxony-Anhalt, the Saale River is also causing concern. Officials fear it might rise even higher than in 2002 and rescue workers are racing to pile up sandbags as quickly as possible.

More than 1,000 soldiers are now helping with the relief efforts. Reinsurer Munich Re said it's not possible yet to estimate the total damage. But some good news has come from Germany's National Meteorological Service (DWD), which expects the rain to abate almost everywhere in the coming days.