Admittedly, it has been a few years since Germany's Social Democrats (SPD) have experienced anything close to a political triumph. But the enthusiasm with which the center-left party has embraced chaos just as it looked as though leader Martin Schulz had finally one-upped Chancellor Angela Merkel in the country's endless search for a coalition government has nevertheless been breathtaking. And the upshot on both sides of the aisle is bewildering: Schulz has renounced claims to a cabinet position and appears to be heading for the backbenches while the SPD leadership has so deeply infuriated the base that it's unclear whether they will approve the coalition deal at all.

Meanwhile, Merkel has sold the family silver to stay in power and stirred her erstwhile catatonic party, the Christian Democratic Union (CDU), into a potentially revolutionary fury.

"It seems that the worse the SPD does in elections and the louder the party's grassroots gripes, the more concessions the CDU ... has to make in negotiations to make the SPD happy," grumbled Wolfgang Bosbach, a long-serving CDU parliamentarian. "How small do the conservatives want to make themselves?"

Bosbach was referring to the outcome of the coalition negotiations last week between Merkel's CDU, Schulz's SPD and the Christian Social Union (CSU), the Bavarian sister party to the CDU. After months of unsuccessfully trying to assemble a government, Merkel was beginning to get desperate, and the result of that desperation was on full display last Wednesday. Despite emerging from the election last September as the strongest party, the CDU will not end up holding any key cabinet positions in Merkel's next government, should the deal ultimately be approved. In a seemingly unending night of haggling, Schulz walked away with the powerful Finance Ministry, the Foreign Ministry and the Ministry of Labor and Social Affairs. The Interior Ministry, meanwhile, ended up going to the CSU, with party leader Horst Seehofer likely to move to Berlin to take over the portfolio.

It was a masterful bit of negotiating by Schulz. But even before the talks had come to an end, he had quietly agreed to step aside as SPD head. The party, after all, had grown increasingly unhappy with Schulz's leadership in recent weeks, prompting him to arrange a deal with floor leader Andrea Nahles that she should take the SPD reins while he would be given the consolation prize of the Foreign Ministry. It would be, they hoped, the moment when the party could finally turn the page and begin rebuilding.

Their agreement was announced last Wednesday. For years, though, the once-proud SPD has shown a unique knack for making the worst of a bad situation. And on Friday, the party leadership was forced by internal grumbling to reverse course, with Martin Schulz now saying that he won't be seeking a cabinet position at all. In other words, the appearance on the stage of German national politics has come to an unhappy end.

Schulz's hold on the party leadership, of course, has been rather tenuous ever since the SPD managed just 20.5 percent last September 24, the party's lowest postwar result in a nationwide election ever. Initially, a sense of euphoria had surrounded the politician after he ended his career in Brussels, where he had been president of the European Parliament, to helm the Social Democrats back at home in Germany, but he quickly lost traction in the race against Merkel. Immediately after the election, Schulz pledged that his party would not join Merkel as a junior coalition partner, a promise he repeated after Merkel's first attempt to form a government collapsed in November. He also said he would never join a cabinet led by Merkel.

But then, faced with the decidedly unappetizing prospect of new elections, he reversed course. And the further talks with the conservatives progressed, the lower the SPD slipped in the polls - to just 17 percent in a survey released last Monday, just two percentage points ahead of the right-wing populist Alternative for Germany (AfD).

Schulz began to realize that his end was nigh in January. When announcing that the SPD was reversing course and would enter exploratory talks with Merkel's conservatives on forming a new governing coalition, he promised that the SPD grassroots would be allowed to vote on any deal that emerged. Should they reject the deal, Schulz knew that he would be history. But even as talks progressed, he began speaking with Andrea Nahles about turning over the leadership of the SPD to her, a rough plan that became more realistic with her passionate speech at a party summit on January 21 in Bonn.

The two began discussing the precise timing of the leadership change and the idea that Schulz would be given the post of foreign minister in Merkel's new cabinet. And when coalition negotiations finally came to an end on Wednesday morning, senior party leaders came together to grant their approval of the Schulz/Nahles plan on condition of the party grassroots approving the larger coalition deal with Merkel. There was no opposition voiced during that Wednesday meeting and Schulz informed his erstwhile friend and predecessor Sigmar Gabriel, who currently holds the Foreign Ministry portfolio and has indicated his desire to hang onto the position.

It wasn't long, though, before senior SPD members did begin voicing their disapproval of the backroom deal. "I wish that you wouldn't join the cabinet," said Martin Dulig, head of the SPD state chapter in Saxony, at a meeting a short time later. In the powerful SPD chapter in North Rhine-Westphalia, anger was likewise swelling, a state of affairs that could ultimately endanger the entire coalition deal once it is put up to a grassroots vote. Then, last Thursday evening, Gabriel released a statement accusing the SPD leadership of a lack of respect and of breaking its word.

By Friday morning, the explosiveness of the situation had become clear to all, with SPD leaders in states around the country calling in to report deep grassroots dissatisfaction - and concern began to grow that the leadership debate could lead party members to vote against the coalition with Merkel. There was only one way out and Schulz reluctantly took it. "I hereby relinquish my claim to a cabinet position and hope that my decision will put an end to the leadership debate within the SPD," he said.

With that, the Schulz experiment has ended. Nahles could take over party leadership as early as Tuesday.

One might, of course, assume that the SPD implosion would put the CDU in a mood to celebrate. But the hangover from the tough coalition negotiations has proven difficult to shake. Indeed, Merkel's decision to sacrifice all key ministries to the SPD and CSU has led to significant criticism of the party leadership in the CDU as well.

Merkel believed she had little choice but to make the cabinet concessions to ensure that the 464,000 SPD members would ultimately approve the deal. After her first attempt to form a coalition failed, she knew that a second failure would likely mean the end of her political career and yet more political chaos in Germany.

But it remains unclear whether she has, in fact, forestalled the end of her tenure or merely accelerated it. Every established party in Germany has recently gone through a phase of renewal and upheaval in recent years with the exception of the Christian Democrats. Now, though, after 18 years under Merkel's leadership, and 12 of those as chancellor, it is beginning to look as though a willingness is growing within the CDU to criticize its leader.

"Whew! At least we managed to hang onto the Chancellery!" tweeted CDU parliamentarian Olav Gutting sarcastically after the negotiation results were announced. Anger was prevalent higher up the pecking order as well. "The Social Democrats managed to get a lot," complained Daniel Günther, CDU governor of the state of Schleswig-Holstein.

Notably, though, the anger this time isn't limited to individual voices as has traditionally been the case when it comes to criticism of Merkel. Her ability to constantly keep a tight lid on possible intra-party uprisings has long been a hallmark of her tenure, but that lid appears to have come ajar. And as is generally the case within the SPD, it is the youth wing of the CDU that has been the most vocal. The youth chapter in Bremen said last week it was "extremely disappointed" and issued a demand that the CDU form a minority government. The CDU's youth chapter in Berlin noted that the SPD was "completely" successful with its strategy of blackmailing the conservatives.

At a meeting of CDU parliamentarians in Berlin last Wednesday, the mood was dark indeed. One long-time representative complained that he saw "no good reason at all" for Merkel to have given up all of the key portfolios. And Paul Ziemiak, head of the party's nation-wide youth wing, said that he hasn't heard a single positive comment about the negotiation results from the CDU grassroots. Sylvia Pantel, a parliamentarian from North Rhine-Westphalia agreed, saying the negotiation results will be almost impossible to sell to supporters back home in her district.

Many of the voices that have criticized Merkel in recent days are not new to the ranks of her doubters. And it is considered highly unlikely that the Christian Democrats would vote against the new coalition government between the CDU, CSU and SPD. It's also unlikely that Merkel must immediately fear a revolt from within her party -- she and those close to her still remain far more powerful than their adversaries within the CDU.

In an interview on public broadcaster ZDF on Sunday, however, Merkel sought to exude confidence. "I ran for a four-year term," she said. "And I'm someone who keeps promises." Still, she did allow that change might be on the horizon. "Now it's about giving an opportunity to those whose political future is still ahead of them or who are right in the middle of it," she said. "We'll do everything possible to give these people a chance." 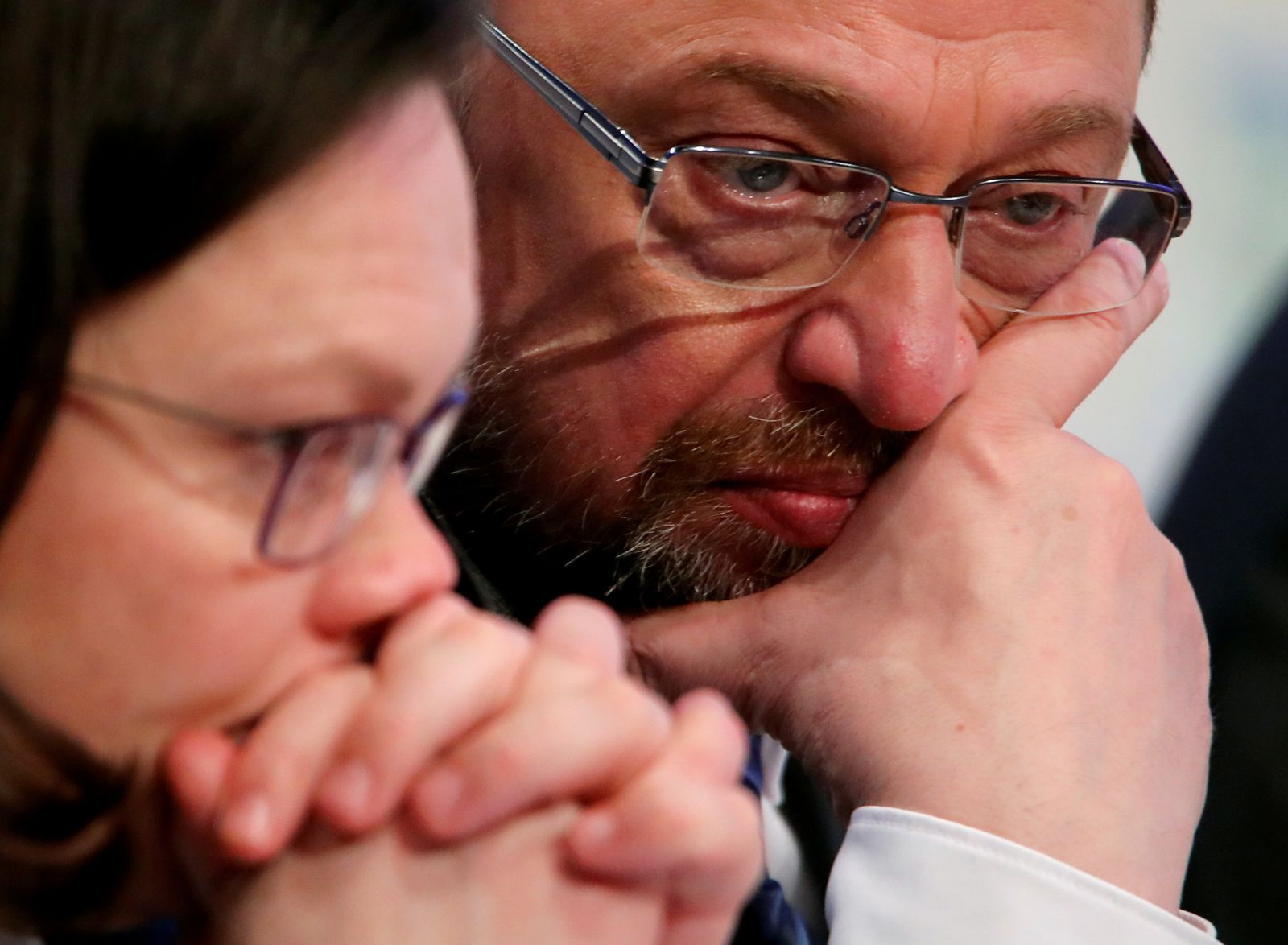 SPD leader Martin Schulz (right) together with Andrea Nahles, who is set to replace him.