Not surprisingly, relief was the dominant emotion. And that proved rather helpful as the trio of party heads finally stepped up to the podium at the headquarters of the center-left Social Democratic Party (SPD) in Berlin at 11 a.m. on Friday, intent as they were on playing down the arduousness of the overnight negotiations that had just ended.

It was a grueling night for Christian Democratic Union (CDU) head Angela Merkel, Christian Social Union (CSU) leader Horst Seehofer and SPD chair Martin Schulz. Indeed, it seemed at times as though it would never end. The talks, aimed at determining whether there was sufficient agreement among the three parties to begin formal coalition negotiations, had begun 24 hours earlier on Thursday morning. Some of those involved in the talks ultimately spent more than 26 hours at SPD headquarters. And when Merkel, Seehofer and Schulz finally began speaking to the journalists present, some of their staff members in the audience looked to be on the brink of nodding off.

But from the perspectives of the politicians involved, the marathon was ultimately worth it. Merkel called the 28-page document a "paper of give and take, as it should be." Seehofer, who leads the CDU's Bavarian sister party, said he was "extremely satisfied." And Schulz, who hosted the talks, even went so far as to speak of an "outstanding result." Germany still doesn't have a government -- the talks that concluded on Friday morning were merely to determine if a coalition was possible -- but the three party heads made it sound like most of the hurdles had been cleared.

Despite the positivity, however, the talks were extremely tough, with some of the news that leaked out during the night seemingly indicating that the talks were on the verge of collapsing -- just as the first attempt to form a government did several weeks ago. Schulz, though, denied on Friday morning that failure had been imminent. "They were never on a knife's edge," he said, to Merkel's agreement.

Schulz did say, however, that the talks were "turbulent" on occasion. Throughout the night, senior members of the parties involved in the talks would leave the building, pledging to be back soon. "It'll be a little while yet," CSU domestic policy expert Stephan Mayer said just before 4 a.m. At 5:19 a.m., a CDU official left, saying "it's still going" to the gathered journalists on the way out. At 6:30 a.m. Interior Minister Thomas de Maizière of the CDU departed, saying: "I'll be back in two hours."

But then the night was over, but the talks continued -- in larger groups of negotiators, in working groups and sometimes just the three party heads alone.

From the perspective of Merkel's conservatives, the most important outcome of the talks is the fact that there will be no tax hikes. Furthermore, the deal calls for a future coalition government to adhere closely to the more uncompromising approach on refugees taken in recent months by the CDU and CSU. That means that family reunification privileges will remain strictly limited and a ceiling of between 180,000 and 220,000 refugees per year will be formalized. In return, the SPD got some of the things on its wish list, including opening the door to federal funding of schools, which had been prohibited since states are responsible for education in Germany. Furthermore, employers will be forced to pay more for their workers' health insurance. The agreement also calls for the establishment of a timeline for eliminating coal as an energy source and emphasizes the need to reform the EU and provide the bloc with more funding.

The fact that the three parties were able to reach a tentative agreement after less than a week of talks is hardly a surprise. After the initial round of coalition talks failed in November -- negotiations that involved the CDU, CSU, Green Party and Free Democrats -- Merkel's conservatives are eager to establish a stable government as rapidly as possible. After publicly ruling out a coalition with Merkel following the election last September, and repeating that rejection in late November, the Social Democrats ultimately realized that there was no alternative to seriously considering another alliance with the conservatives.

The pressure had simply become too great, particularly from German President Frank-Walter Steinmeier. Furthermore, the idea of new elections was particularly unappetizing for the Social Democrats. In September, the party achieved its worst result since World War II -- and polls indicated that they could expect to do even worse in the event of a new vote. The party would also have had little to gain by tacitly supporting a Merkel minority government.

Still, the path ahead promises to be difficult, particularly for SPD head Schulz. First, he needs clear backing from his party's leadership committee to enter formal coalition talks with Merkel and Seehofer. Some SPD leaders, however, remain skeptical, including Kevin Kühnert, head of the SPD's youth wing and a vociferous opponent of a renewed coalition with the conservatives. Some "core demands" that the SPD had agreed to at a party convention in December, he said on Friday, had become significantly watered down.

Merkel's conservatives don't face such difficulties. It is seen as a virtual certainty that CDU and CSU leaders will authorize their party heads to enter formal coalition talks. The two parties are eager to finally set up a stable government.

The Week that Lies Ahead

SPD head Schulz, meanwhile, will embark on Monday on a mini-tour through Germany to speak to the party base -- a trip that promises to be a difficult one. The party is extremely wary of yet again playing second fiddle in a Merkel-led government, and without approval from delegates to the special party convention set to take place a week from Sunday in Bonn, the SPD will be unable to enter formal coalition talks.

Furthermore, Schulz isn't just fighting for a coalition with Merkel and Seehofer, he is also fighting for his own future as party head. If the convention should vote against formal coalition negotiations with the conservatives, he would likely be forced to step down -- and the party's entire senior leadership would come under pressure to do the same. That, in turn, would put Merkel's own hold on power to the test: Two failed attempts at assembling a government could prove to be too much to withstand. And Seehofer would be in the same boat.

As such, Schulz won't just be battling for his own future next week, but also for the futures of the leaders of the CDU and CSU. Indeed, it's no accident that Seehofer on Friday wished Schulz the best of luck for the week that lies ahead. 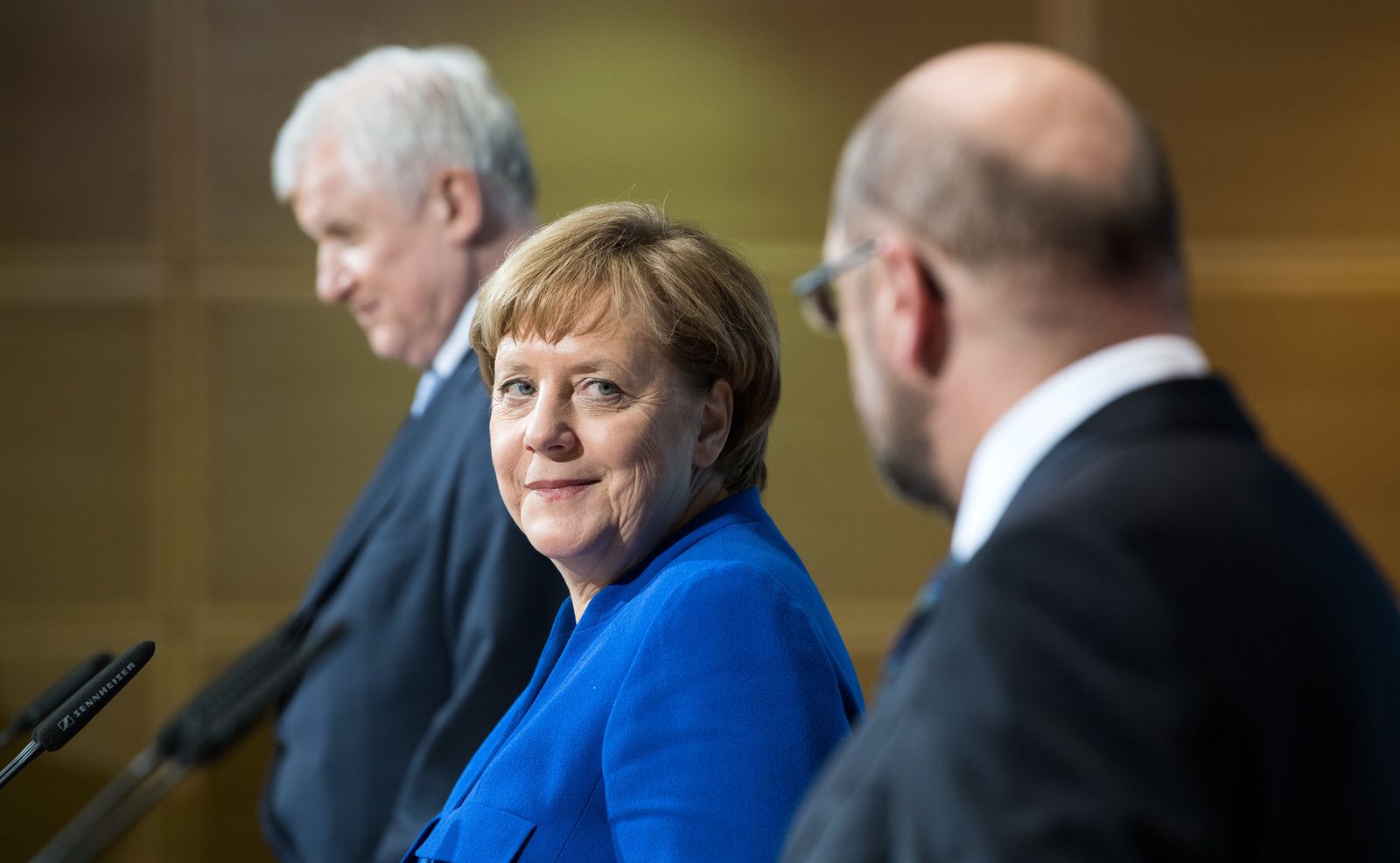