Germans aren't seeing much of Angela Merkel these days. Her election triumph was seven weeks ago and, since then, political activities in Berlin have stagnated into a leaden routine of coalition talks interspersed with optimistic updates from party officials. The chancellor, seen rushing in and out of meetings, has confined herself to telling waiting journalists that the two sides are making progress, step by step.

But are they really? Of course it makes sense not to rush things. But the longer the talks drag on, the greater the doubts as to whether these negotiations will yield a strong set of policies for Germany.

To be sure, the planned reform of the Energiewende, or energy revolution, discussed on Monday is necessary. The parties want to reform the system of green-energy subsidies and curb the growth of electricity prices, and the changes may turn out more effective than would have been possible in Merkel's previous alliance with the pro-business Free Democrats, who were voted out of parliament on Sept. 22 and won't be part of the next government. Of course, that's not surprising, seeing that the center-left Social Democrats (SPD) and Merkel's conservatives have a lot of common ground on energy policy.

But what about other key policy areas? After dozens of meetings at the working-group level and four official negotiating sessions with all the leaders of the planned grand coalition, it still isn't clear what the next government wants to achieve over the next four years.

The parties plan to reach a coalition deal by the end of November, but there's still no sign of any big project on the horizon. So far, the policies agreed on are rather secondary: There will be limits on housing rents, more state support for students, an expansion of Internet broadband capabilities and subsidies for housing refurbishment.

This lack of genuine vision can largely be blamed on Merkel. She won the election by a wide margin and should be outlining the big projects she wants her next government to tackle. But, so far, her role in the talks has been that of mediator. In fact, the Christian Social Union (CSU), the Bavarian sister party to Merkel's Christian Democratic Union (CDU), and the SPD have been setting the agenda with calls for a road toll, a minimum wage, more nurseries and quotas for women in business.

Merkel wants to reform the structure of the EU, but that won't be part of the coalition agreement. Instead, her plans for Europe will go into CDU's manifesto ahead of the 2014 parliamentary elections. She can still emphasize her policies of preventing any tax hikes and providing higher pensions for mothers -- but even the latter move, which will cost billions of euros, has yet to be agreed upon.

Last week, the pro-business wing of the conservatives warned that the next government mustn't be too Social Democratic. Many in Merkel's party are concerned that the government program will be a loose collection of policies that don't address fundamental issues, such as health care, the aging population, Europe or the integration of immigrants.

"We'll look ridiculous if we don't use such a big majority to tackle the really important questions," warned one senior CDU member who declined to be identified by name.

Gay Marriage, Referendums Could Be Obstacles

One issue that does threaten to cause a rift is same-sex marriage. According to a report published in the daily Die Welt on Tuesday, a coalition working group charged with discussing family policy broke off talks on Monday night following a row over the rights of gay couples to marry and adopt children. The SPD's chief negotiator in the group, Manuela Schwesig, threatened that the coalition talks as a whole could fail over the issue, Die Welt reported.

"Under these circumstances I can't recommend that SPD members agree to a coalition agreement," Die Welt quoted her as saying during the meeting. The coalition deal will be put to a vote by the party's 470,000 members.

The SPD confirmed on Tuesday that the talks on family policy had been broken off but added that Schwesig had been incorrectly quoted. The negotiations resumed on Tuesday morning, and the contentious issue has been left off the agenda for now.

There is also disagreement on the the subject of referendums. Merkel and many in her party are reportedly unhappy about a reported proposal by Interior Minister Hans-Peter Friedrich of the CSU and Thomas Oppermann of the SPD for referendums to be held in the future on major European issues, such as the accession of new member states, the transfer of powers to the EU or German financial commitments to the EU or its EU partners.

The CSU had called for the introduction of referendums on EU policies during the general election campaign. The SPD has likewise been calling for more direct democracy. Leaders will discuss the proposal on Wednesday during the next round of coalition talks. 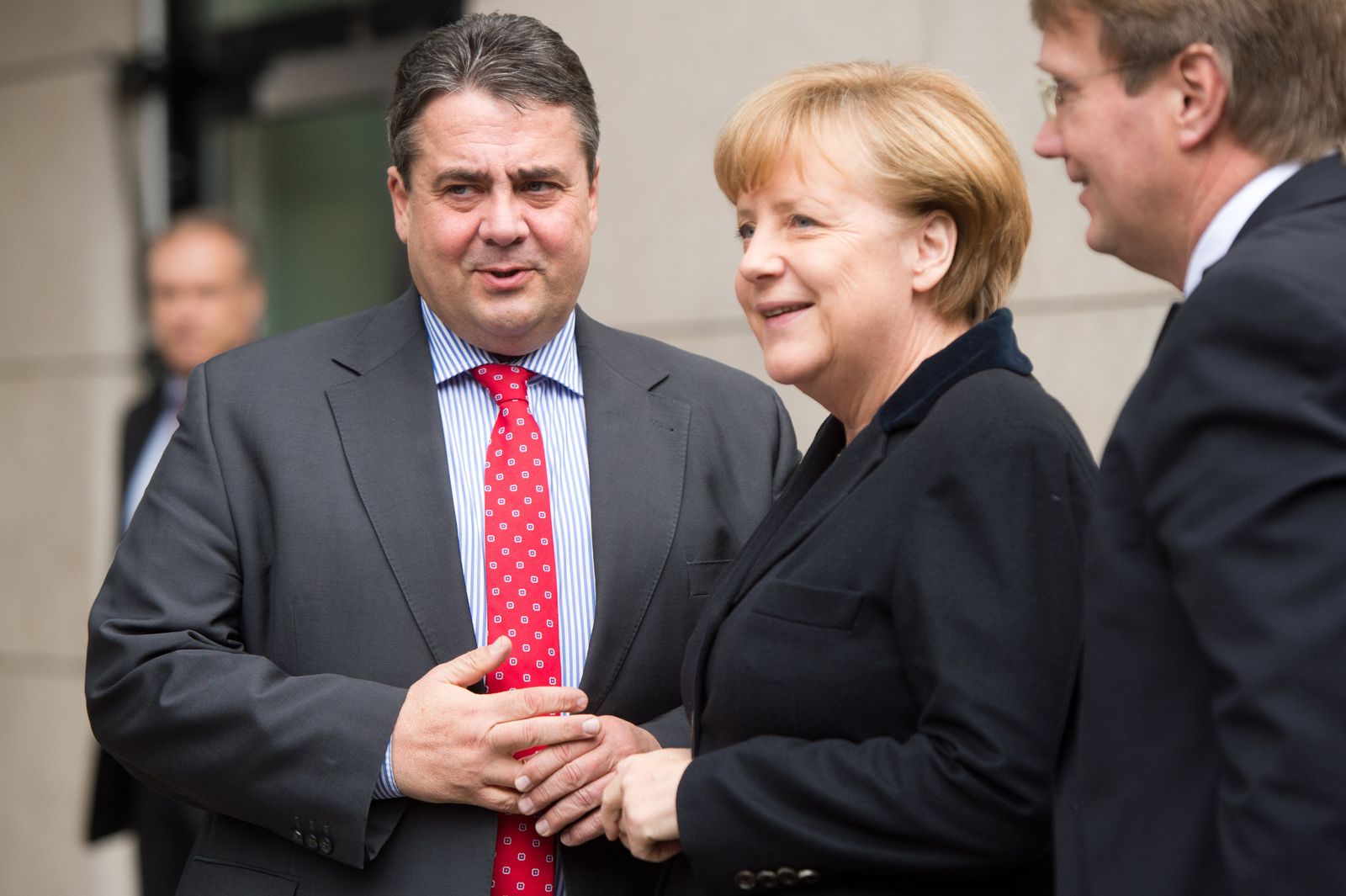 Merkel with SPD leader Sigmar Gabriel ahead of talks on Monday.