There aren't many writers who can trigger a vast outpouring of international media bile and dissentient political reaction with a simple poem. But German Nobel laureate Günter Grass managed to perform just such a coup on Wednesday. The poem, called "What Must Be Said," is a mere 382 words long -- but it has sparked reams of reaction from media talking heads and plenty of head-scratching among politicians in Berlin.

The reason isn't difficult to divine. The verse is little more than a scathing critique of Israel's current policies toward Iran that also accuses Israel of endangering world peace. Furthermore, it blasts Germany for its plan to sell Dolphin-class submarines to Israel, vessels that are capable of carrying nuclear-armed missiles. And Grass is, after all, Germany's best-known living writer.

While there are many in Germany who are skeptical of Israel, particularly when it comes to the occupation of Palestinian territories, public broadsides against the country are decidedly dicey. Israel's very existence is a direct product of the Holocaust, and -- aside from a few rebukes from left-wing politicians -- Germany has been exceedingly careful over the decades to avoid ruffling Israeli feathers. And, as Grass points out in his poem, criticism of Israel has often been equated with anti-Semitism in Germany.

As such, the political reaction was immediate. Politicians of all stripes rushed to condemn the poem, including even some from the far-left Left Party, which has been critical of Israel in the past. Foreign Minister Guido Westerwelle also jumped into the fray, saying that "trivializing the dangers posed by the Iranian nuclear program equates to a misapprehension of the seriousness of the situation."

Grass, it must be said, is hardly known for silence on political issues of the day. Nor is he a blank page when it comes to controversial statements about Germany's past. In a 2011 interview with Israeli journalist Tom Segev, Grass claimed that 6 million Germans were "liquidated" by the Soviets following World War II -- a number disputed by historians and striking for its parallel to the 6 million Jews murdered by Nazi Germany in the Holocaust. In 2006, after he revealed in his autobiography that he had been a member of the Waffen SS, he was blasted for having kept the information secret for so long.

As for press reactions to Grass' poem, German editorialists have a field day on Thursday.

"Grass once again wants to prove himself right, for deeply personal reasons. He belongs to a generation of men who have never gotten over the fact that they began their careers on the wrong side of history. It is understandable: Membership in the Waffen-SS is normally not a great beginning for a career as keeper of the global conscience. Were I to have joined the Nazi military at age 15, I too would likely be a bit wary of criticizing Holocaust survivors. But that is exactly the problem: Humility was never Grass' thing. His expertise lies more in self-righteousness."

"Those on the right sought moral cleansing by minimizing their own crimes. Those on the left took a different path. Instead of denying their misdeeds, they put them on full display, thus clearing their names. The message, in other words, is: 'We Germans have learned our lesson from the Holocaust, it is time that the Jews do so as well.'"

"The second step in this transformation of guilt is establishing a new perpetrator. One needs a fair bit of fantasy to portray Iran as the victim of Israeli extermination plans, but such a spin follows a tortured logic. If the Jews are the real aggressors, then one's own guilt isn't as great. This moral shift grants one a clear conscience to provide moral instruction to others."

"Obstinacy increases with age, but so too does the urge to offset guilt. It isn't all that long ago that Grass allowed himself a strange Holocaust comparison in which he set the six million Jewish Holocaust victims against six million dead German soldiers. Now we know that this calculation was no blunder, rather it was what one refers to as a Freudian slip."

"One is compelled to defend the aging Günter Grass from the immoderate criticism of his embarrassing, pathetic and vain poem, 'What Must Be Said.' Not because the poem ... is the least bit convincing -- on the contrary, it falls fairly flat. But because ... he is far from being an anti-Semite as some critics have claimed in their malicious responses."

"As wrong as Grass' one-sided alignment may be, it doesn't explain the strong reaction to the kinds of claims that are often made by other critics of Israel. Certainly Grass is not just anyone. Rather he is the most famous living German writer. He is also perhaps the last of the political authors who involve themselves in debates and whose words carry weight."

"But with Grass something else comes into play -- breaking taboos. Anyone who criticizes Israel is accused of anti-Semitism, Grass says. But even if some critics make this prophecy come true, the claim is fundamentally wrong. For years the Middle East conflict has been argued about in both Israel and Germany -- including over the trigger-happy rhetoric of some Israeli politicians."

"The problem is not that Grass has sharply criticized the Israeli government for their policies on Iran. Such criticism is common and all too justified. But Grass uses the publication of his poem for something altogether different: He excuses his long silence with the fear of being blasted as an anti-Semite. But that is wrong and perfidious. Articles … that accuse the government of Israeli Prime Minister Benjamin Netanyahu of pursuing a dangerous course are so numerous as to be uncountable. And it of course has nothing to do with hatred of the Jews if one expresses skepticism of Israel's policies toward Iran. But when Grass alleges exactly that, he is producing a taboo that doesn't exist. He is creating new prejudice. As such, it is fitting that he finds but mild words for the regime in Tehran only to use much stronger language for Israel."

"Ahmadinejad is a dictator and a Holocaust denier who has declared the destruction of Israel to be an official goal of his state. The fact that a German writer of all people has now told the Israelis that the loudmouth is harmless and that they, the only true democracy in the Middle East, are a threat to world peace is unacceptable."

"'Why haev I kept silent, held back so long?' Grass writes. It makes one want to ask: Why did he remain silent for 60 years about his membership in the SS?"

"Having 'grown old,' and 'with what ink remains,' he is using the murmuring tone of a moralist to disseminate just one thing: politically correct anti-Semitism. He's trying to qualify the guilt of Germans by turning the Jews into perpetrators."

"In the 'Peeling of the Onion,' as Grass called his autobiography, he has now reached the center. The core of the onion is brown, and it smells terrible."

"The nuclear power Israel, Grass writes, is a danger to the fragile global peace. It is certainly a defensible thesis. Benjamin Netanyahu seems uninterested in compromise, not with the Palestinians and not with the Iranians. On the other side, Grass sees only a loudmouth who likely doesn't even possess atomic weapons. This loudmouth is named Mahmoud Ahmadinejad -- he has described Israel as 'a cancer' which should be 'wiped off the map.' He adheres to wacky conspiracy theories, denies the Holocaust and would appear to be working toward acquiring nuclear weapons. Grass, though, finds none of that worth mentioning. Is that because of artistic freedom? Grass himself once said that lyric is the form of writing that is the most explicit and clear. Explicit and clear is: The man is blind in one eye." 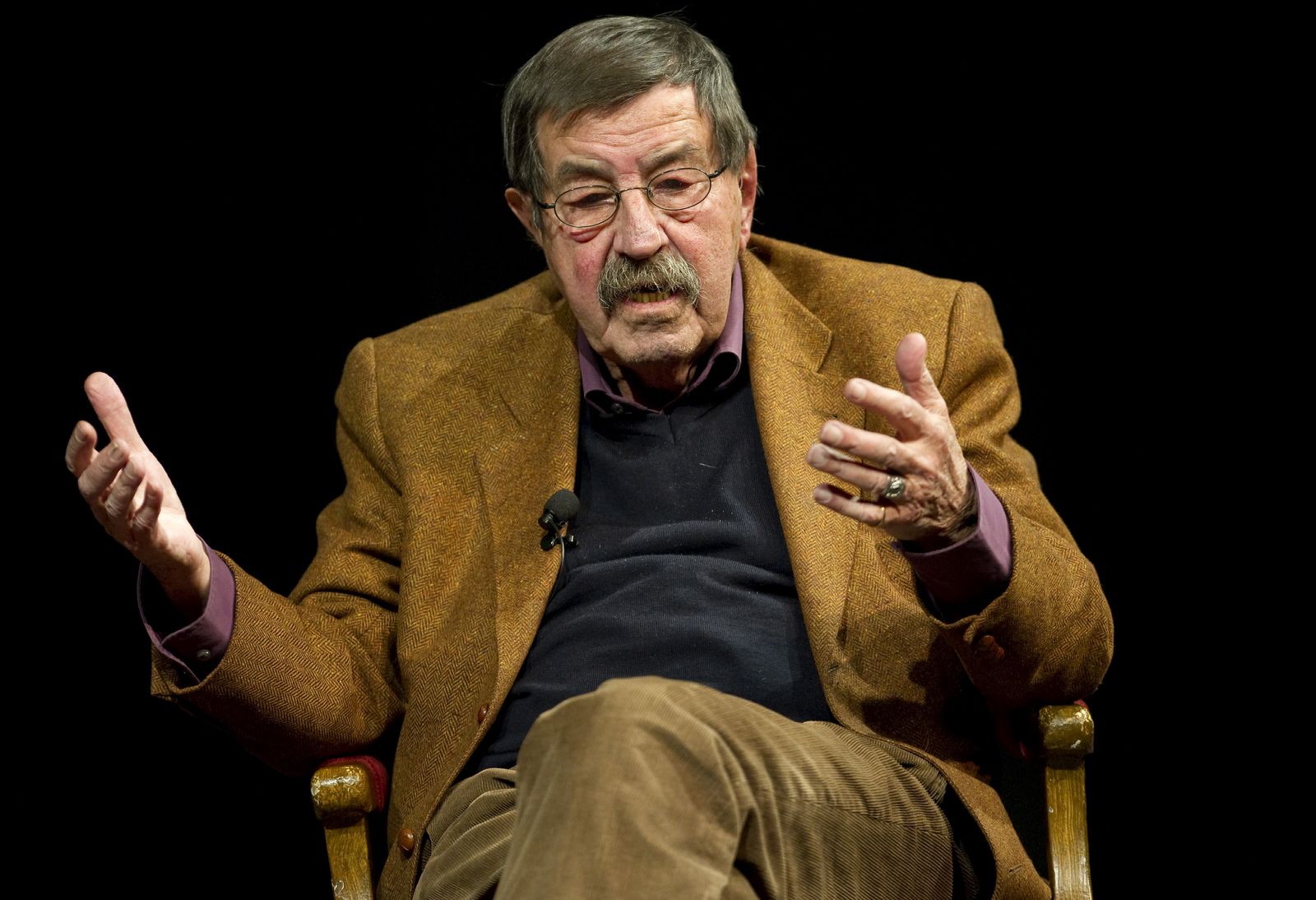 German Nobel laureate Günter Grass is under fire this week for a new poem about Israel.