German Chancellor Angela Merkel is generally known for her cautiously worded comments and her desire to hedge her bets. That makes her statement this week that euro bonds would not happen in her lifetime all the more surprising.

On Tuesday, ahead of the crucial European Union summit in Brussels, she told parliamentarians from the business-friendly Free Democratic Party (FDP), her junior coalition partner, that there would be no full debt sharing "as long as I live." Several FDP lawmakers reportedly wished her a long life in response.

Merkel has long insisted that any form of jointly issued euro-zone debt be preceded by far-reaching reforms that grant Brussels greater control over national budgets and borrowing. But she has never expressed her opposition to euro bonds in such strong terms.

Merkel has since tried to relativize her comments, with the Chancellery taking pains to explain the context of her statement. According to her office, Merkel actually wanted to emphasize that the reforms that would need to precede the introduction of euro bonds are very complex and would take a long time to implement.

But the statement does not bode well for the summit, which begins on Thursday afternoon. Merkel has also made clear that she is unhappy with a strategy paper developed by a quartet of EU leaders -- European Council President Herman Van Rompuy, European Central Bank head Mario Draghi, European Commission President José Manuel Barroso and Euro Group chair Jean-Claude Juncker -- which opens the door to the medium-term introduction of some form of shared debt.

In a statement to Germany's lower house of parliament, the Bundestag, on Wednesday, Merkel said that she would not bow to intense international pressure on Germany to agree to euro bonds. She said the quartet's blueprint for closer financial integration contained major shortcomings, and that she would seek support for her own ideas in Brussels. "I profoundly disagree with the stance taken in the report that precedence is given to mutualization, and that more control and enforceable commitments take second place and are phrased in very imprecise terms," said Merkel, to applause from conservative parliamentarians.

On Thursday, German commentators look at the significance of Merkel's euro bond comment, which looks set to be remembered for a long time to come.

"There would be no collectivization of debt in the EU for as long as she lives, Merkel reportedly told the FDP parliamentary group. Like all predictions, it was a dangerous statement, especially as there are factors at play here which are not in the hands of politicians, but of destiny."

"Merkel's statement, if she really said it that way, comes at a critical juncture in the worst crisis of European integration since the 1950s. The remark, which was intended to reassure members of parliament in the coalition parties and German citizens … will also have been noticed elsewhere. For example, by the markets, whose already weak faith in the future of a euro zone with effective governance is unlikely to have been strengthened. And of course the other participants in the EU summit will also have taken note of her remark."

"Italian Prime Minister Mario Monti and Spanish Prime Minister Mariano Rajoy will have listened particularly attentively. (Their countries are mainly concerned about) reducing their debt levels and becoming competitive again. But it's clear to everyone that these goals can only be achieved over a longer period. One of the key questions that European leaders will have to answer is how to buy the necessary time for that to happen -- and when push comes to shove, just referring to the euro bailout funds is not likely to be enough."

"First comes budgetary control, and then joint liability -- in that order. Business before pleasure, if you will. Angela Merkel has stuck to this position for more than two years. In doing so, she has deliberately reinforced the pressure (on other countries) to carry out reforms. Margaret Thatcher did the same thing when she famously said (in 1979) that Britain wanted its 'own money back,' shaking up a Europe that had become complacent and self-serving. After the initial panic subsides, an emergency causes one to think, and that is exactly what Merkel wants to achieve."

"Naturally, Merkel also makes concessions. She has to, if the EU -- which is now much bigger than in Thatcher's time -- is to remain able to function. But her principle -- that joint debt liability can only happen once spending controls have been introduced -- is an iron one, and rightly so. Which member of the Bundestag, which manager, which family member would want to be liable for (someone else's) debts, without being able to control (their) spending? Nobody. We will see if it is really so hard to put this principle into practice. If the EU recognises (that principle), then euro bonds will no longer be a problem. But only then."

"Angela Merkel is not known for her emotion. She owes her power to cool risk assessment and a kind of radical pragmatism which could easily be mistaken for opportunism. Her promise that there will be no euro bonds as long as she lives does not sound like the chancellor. It sounds too laden with ideology and too bombastic. Plus it doesn't fit with her skepticism toward any kind of ideological commitment. Clearly, the dramatic rhetoric is a sign of the panic that is spreading around her. What her center-right government wants and keeps promising will not solve the euro crisis. And it doesn't want the things that would solve the crisis."

"So far, Germany has usually managed to get its way within the EU. With her fiscal pact, Merkel managed to get the German debt brake model accepted on the European level. But Germany's leadership is shaky. Not because French President François Hollande is so left-wing, but because Berlin's stubborn attitude threatens to ruin Italy and Spain. Even neo-liberals like ECB head Draghi and Commission President Barroso are calling for collectivized debt in the face of potential disaster. But Germany is stonewalling. Merkel is likely to feel rather lonely in Brussels."

"The chancellor has already revised her position in the euro crisis many times -- always under pressure and always too late. But now she wants to play hard ball. It would be the first time that she has chosen ideology over pragmatism. The result would be catastrophic: the death of the euro."

"It's a sentence that will haunt her for a long time to come. There will be no euro bonds 'as long as I live,' Angela Merkel told the FDP members of parliament -- or so they understood her. Even if Merkel meant it less dogmatically than has been interpreted, the German population will judge her on these words in the future."

"But even Merkel must have recognized that stronger rights to intervene in the budgets of EU member states would not be enough to solve the current crisis. Even the most powerful EU austerity commissioner would not be able to rescue the banks in Spain, Greece or Italy, transform their deep recessions into a strong recovery and restore investor confidence."

"Hence the chancellor, despite all her tough rhetoric, always likes to leave herself a couple of back doors. For that very reason, she does not want to commit herself to a firm 'no' to euro bonds."

"The Italians, Spaniards, Portuguese and many others are desperate for a signal that Merkel is willing to compromise. But the chancellor has made her stance even firmer. Until now, her position has been that collectivizing debt can only happen at the end of a transformation into a real fiscal and economic union. Now she is saying she will never yield to this demand for European solidarity."

"Merkel is going into the EU summit in full confrontation mode … She is admittedly bringing a small gesture of reconciliation with her to Brussels: She will make the proceeds of a financial transaction tax available as a sign of solidarity. But no one knows when that tax will come into effect or how much it will bring in. That's simply not enough.

"It's Germany against Europe and the world. That may sound polemical, but unfortunately it's reality. After her statement, the FDP members of parliament reportedly wished Merkel a long life. May she be granted that. But for the euro, her position means that the betting on its demise can now begin." 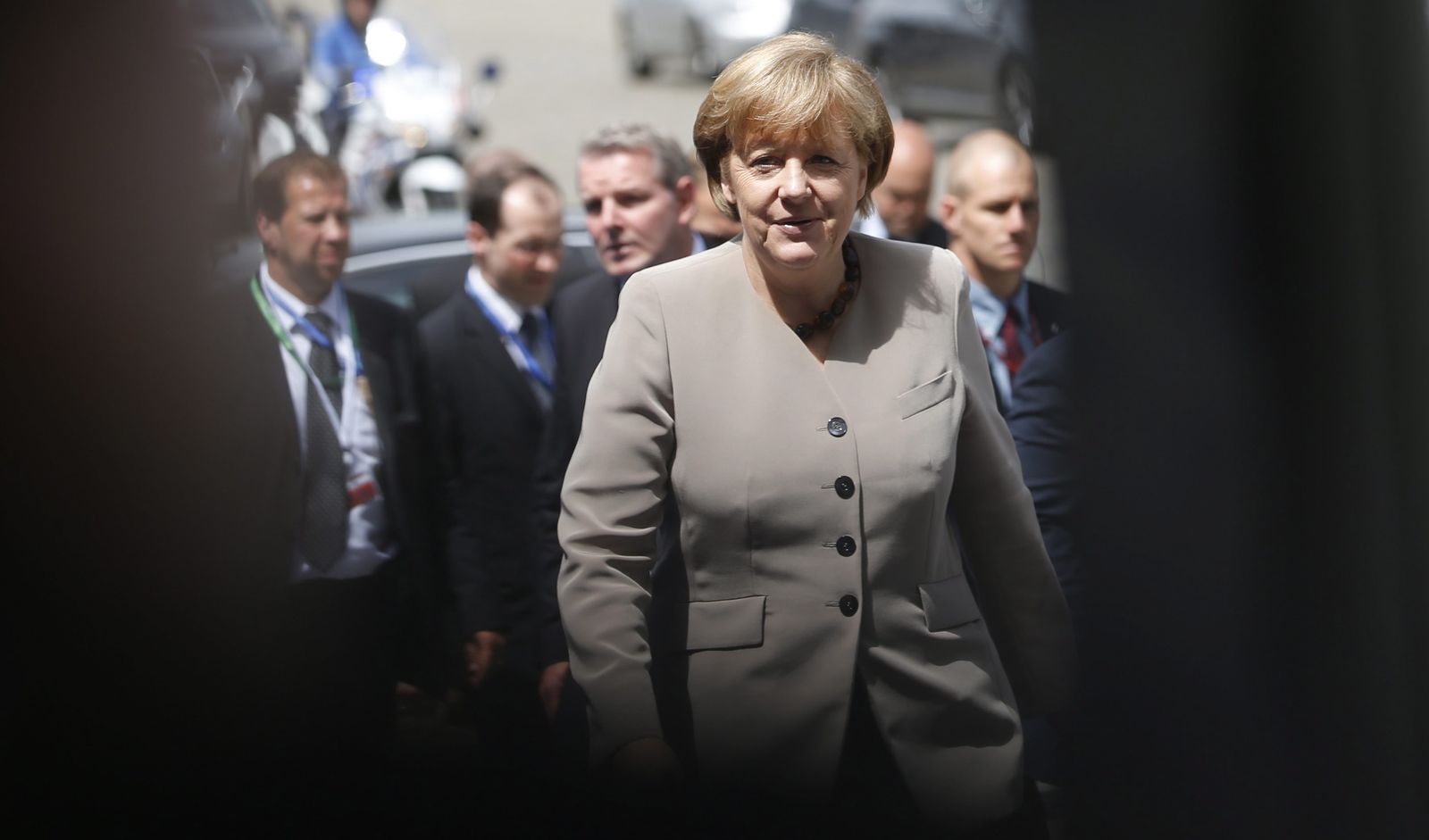