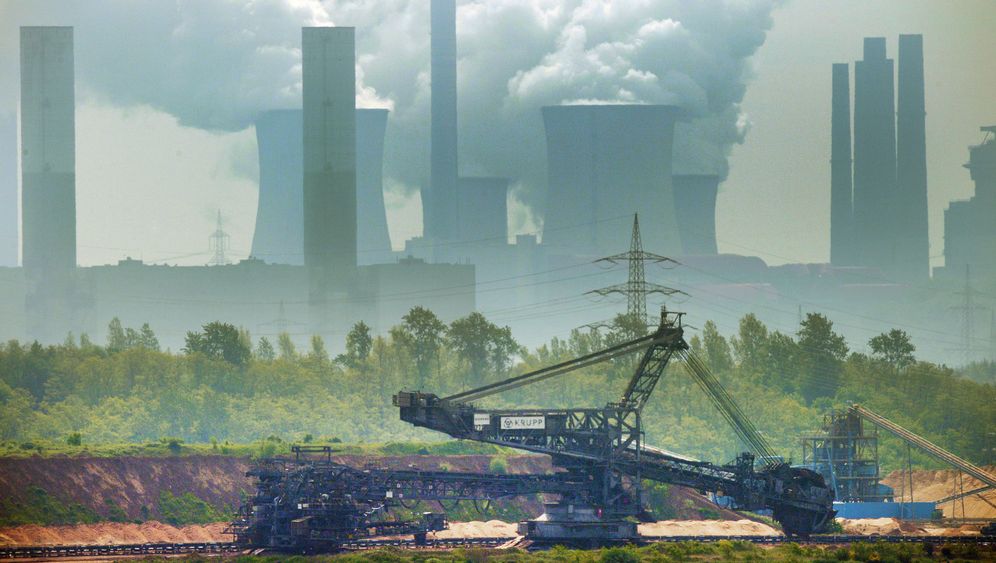 A street called Fasanenweg in Immerath, a village in the Rhineland region of western Germany, makes for a bleak picture. Weeds run riot along the sidewalks and the lawns haven't been mowed in a long time.

Just a single red brick house stands out on the drab street, with sumptuous rhododendrons by the front door and blue wisteria climbing all the way up to the house's gable. This is the home of Stephan Pütz and his wife, the last remaining residents of Fasanenweg. All their other neighbors have given up and fled from the encroaching excavators. Energy company RWE Power AG is extracting a large deposit of brown coal here, in an area of over 110 square kilometers (42 square miles), in the mining zones known as Garzweiler I and II northwest of Cologne.

Brown coal mining there has already swallowed up 14 villages and led to the relocation of thousands of people. In a few years, it will be the turn of Immerath, a village that once had some 1,200 residents and a church so large and grand, people referred to it as the "Immerath Cathedral." Now, the few people left holding out include farmers raising livestock, as well as Pütz, a police officer, and his wife.

Pütz was born and grew up in a neighboring village, where his parents' home already fell victim to the hunger for coal in 2006. He hopes "that Immerath can be saved from the mining and that I can continue to live here." He's fighting on behalf of many others as well. "We don't see why we should allow our lives to be turned upside down so that a corporation can profit," Pütz says. He has resisted coal mining for nearly 20 years, together with environmental group Friends of the Earth Germany (BUND).

Pütz and BUND have taken their case to every level of the German judicial system, so far in vain. "Mining rights trump fundamental rights" is a saying here in this coal-mining region. Now, the German Constitutional Court will decide whether more effective legal protection against such mining projects should be implemented. A hearing is set to take place this week. Depending on the court's decision, the enormous Garzweiler II open-pit mining project might have to be revised or even halted entirely.

Until 1937, Germany's "General Mining Act" stated that a property owner could "never" be forced to surrender "property containing residential, commercial or factory buildings." This ban was dropped under the Nazis, and the Federal Republic of Germany has since upheld the legal position that property owners can be forced to relinquish residential and commercial properties in cases of "overriding public interest."

In most cases, property owners can only mount a legal defense when it's too late. "When you take a closer look at these cases, you start to wonder if you're living in Germany or in a different regime," says Frankfurt lawyer Dirk Tessmer, who represents Pütz and BUND. Tessmer can see why brown coal mining has never before been put on trial. "Legal protection exists only under extremely difficult conditions and only once it's a fait accompli and people are already being resettled -- most of them eventually get worn out and give up," he explains.

What's happening now in the Rhineland also happened in the Lusatia region of eastern Germany, where residents of a village called Horno spend 15 years fighting their way through the courts. Eight years ago, following yet another legal defeat, the last holdouts agreed to accept a settlement, taking their compensation payments and moving out.

The planning for Garzweiler II goes back decades. The company then known as Rheinbraun AG first applied for permission to establish an open-pit mine in the area in 1987. In 1997, the local mining authority in Düren approved the "Strategic Operating Plan Garzweiler I/II," thus opening up the area for open-pit mining. The nearly 8,000 people affected by the decision were powerless to stop it. There were no legal grounds for private citizens to contest the plan in court. Their only option would have been to wait until the time came when the company wanted to buy up their property to implement its plan. By that point, too many others have already sold their properties and the villages lay abandoned -- it is too late.

Pütz still tried, though, and achieved a partial success at the Federal Administrative Court, which awarded him general legal protection against the mining company's strategic operating plan. But the judges didn't examine whether open-pit brown coal mining in general and in this region in particular is "imperative" for power generation, as Pütz had hoped they would. The court was satisfied with its conclusion that the project is "reasonably necessary."

Pütz has not yet been forced to sell his property. But since he knew he had no hope of getting the administrative courts to help in his battle against the excavators, he took his case to the Federal Constitutional Court, together with BUND. The environmental organization had purchased a meadow in the region in the 1990s and planted it with fruit trees. In 2006, the harvest was so abundant that BUND had some of its crop distilled into fruit brandy as part of its anti-mining campaign.

Then came the excavators, and now a gaping hole yawns where the apple trees once grew. Was that legal? Dirk Jansen, head of BUND for the state of North Rhine-Westphalia, believes the mining company's actions violated Germany's constitution, known as the Basic Law. "The Federal Mining Law conflicts with the Basic Law," he says.

BUND and Pütz are now placing their hopes on the Federal Constitutional Court. Even the fact that they have got as far as a hearing before the court is a success for them. Pütz bases his claim, among other things, on Article 11 of the Basic Law, which guarantees freedom of movement. In principle, every person has a right to move to the place where he or she would like to live -- and as the law is frequently, this includes the right to stay in the place where one is already living.

The administrative courts were unimpressed by this argument, ruling that the right to freedom of movement assumes that "such a usage is legally permissible" for the place in question. Authorities, the court ruled, may also specify a different usage, for example turning a residential area into a coal mining area. The question as to the extent of this protection of freedom of movement thus "required no clarification" in this case, the court found. The Constitutional Court judges, though, take a different view and have announced that they plan to devote particular attention to this question.

The North Rhine-Westphalia state government, meanwhile, after years of keeping quiet on the subject, is finally realizing that the court's decision could have far-reaching consequences for open-pit brown coal mining as a whole. Late last week, essentially at the last minute, the state government, currently a coalition of the Social Democratic Party and Green Party, submitted a written statement expressing that it sees "an overriding public interest in maintaining a secure energy supply on the basis of domestic brown coal" and that this remains unchanged despite Germany's shift toward renewable energy sources. Brown coal, the statement reads, will remain "an essential component of the energy mix in North Rhine-Westphalia for the period from 2020 to 2030 as well."

An expert opinion submitted to the court by the Federal Environmental Agency, however, suggests otherwise. It reads, "It has become apparent that the extraction rate previously approved for the Rhineland mining area exceeds demand in the long term."

A legal article from a number of years ago might help Pütz as well. The fundamental right to freedom of movement offers protection "from forced resettlement and thus confers in this sense the right to a home," one young lawyer wrote in 1997. She continued on to state that Garzweiler, too, should be measured by this standard, "that requires more than has so far been done."

The author of that article is Susanne Baer, now a judge at the Federal Constitutional Court. She is one of the judges who will rule on the Garzweiler case.