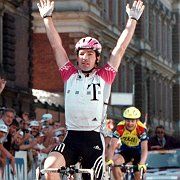 Bert Dietz, and Telekom, in better days: winning a stage of the Course de la Paix in 1998.

The cycling world is reeling from allegations by Bert Dietz, a onetime Telekom teammate of Jan Ullrich's, that doctors doped him with blood boosters during the days of German cycling glory in the 1990s. Dietz told German TV on Monday that two doctors from Freiburg University had personally given him shots of erythropoietin (EPO) in 1995. The doctors, Lothar Heinrich and Andreas Schmid, were suspended from their jobs in Freiburg on Tuesday.

Dietz didn't implicate other Telekom riders, but in the meantime another teammate, Christian Henn, has admitted to using EPO. "I was involved," the 43-year-old, who retired in 1999 after testing positive for testosterone, told the Cologne daily Stadt Anzeiger. "The times were like that. You couldn't expect to keep up if you didn't."

Dietz said the Telekom doctors had pressured him to try the new drug, which at the time wasn't on the list of tested substances. "(We were told) if we wanted to ride in the front ranks, then we'd probably have to try this new stuff," he said.

Deutsche Telekom -- which now fields the team under its international brand, T-Mobile -- will wait for the results of an investigation before making any decision on its future sponsorship of the team. If Telekom did pull out of cycling, said Stephan Althoff, the team's sponsorship boss, it would not be an admission of guilt. He told the Süddeutsche Zeitung it was just necessary for the sport to "look clean."

But team spokesman Christian Frommert said T-Mobile was showing no signs of pulling sponsorship. He said the corporation had recently extended its contract until 2010.

Fallout from a book, and the Spanish doping scandal

What seems to have shaken loose the confessions is a book by the team's former massage therapist, Jef D'Hont, accusing Telekom of encouraging its riders to take EPO. Dietz is the first Telekom rider to admit using the hormone, which is natural to the human body and helps build red blood cells. He also claims to be the first Telekom member to have tried it. Dietz' career peaked with stage wins in the the Tour de Spain in 1995 and '96.

He said the Freiburg doctors "offered" the new drug to him, "but in such a way that everyone knew, 'If I don't take this now I may end the year with such poor results that my contract won't be extended.'" The doctors had been under investigation by government authorities in connection with doping since early May.

The German Telekom team won the Tour de France in 1996 and 1997, led first by Bjarne Riis, a Dane, and then by Jan Ullrich, the first German to win the tour. Ullrich is a legendary figure in Germany -- an athlete raised in the former East who also won gold and silver medals in the 2000 Summer Olympics. These victories crowned a series of European victories and strong Tour de France showings for Team Telekom in the late 1990s.

Both Riis and Ullrich have denied taking any performance-enhancing drugs. But a long-running investigation into a Spanish doping ring forced Ullrich to retire from cycling in February 2007. Ullrich's case came on the heels of last summer's revelations that 2006 Tour de France winner Floyd Landis had tested positive for abnormally high levels of testosterone. He has not yet been stripped of his title, but hearings on his case are ongoing.

German politicians, like the SPD's Peter Danckert, have called for a "draining of the doping swamp" in professional cycling. Danckert heads an athletics commission in the German parliament. His Green Party colleague, Winfried Hermann, told Netzeitung that more drastic anti-doping penalties were necessary.

"The sensational admissions by Mr. Dietz make the string of successes by Team Telekom and Jan Ullrich's Tour triumph look like a big athletic con job," he said. "If it becomes clear that this really was a fraud, then the wins need to be disallowed. That also goes for Jan Ullrich's victory."