The paper leaves little room for misinterpretation. A seven-page report on the recently cancelled Euro Hawk German surveillance drone clearly notes that significant changes to the aircraft's design would be necessary for it to be allowed in German airspace. Furthermore, the modifications would cost "between €250 million and €600 million and would not guarantee a successful licensing process." In summary: further developing the Euro Hawk program "includes incalculable technical, time and financial risks."

It is a document that was read at the very highest levels of the Defense Ministry. Two state secretaries in the ministry noted that they had perused the report, as did other ministry and military officials.

It is also a document that could very well lead to the end of German Defense Minister Thomas de Maizière's career. After all, the paper, seen by SPIEGEL, was not the pretext for the recent cancellation of the half-billion-euro Euro Hawk program. Rather, it was written in February of 2012, fully 15 months before de Maizière finally pulled the plug on the surveillance drone program this May.

Either he read the report and ignored it, or he has an appalling lack of insight into what is taking place in his own ministry. Neither possibility provides de Maizière much in the way of job security.

Indeed, there are indications that Chancellor Angela Merkel may be withdrawing support from her former chief of staff, a man who was once one of her closest confidants. In an interview with SPIEGEL published on Monday, she said, "Thomas de Maizière is taking the time necessary to provide the Bundestag with the most comprehensive summary of the situation possible." Hardly a repeat of her statement of just two weeks ago that she has the "fullest faith" in de Maizière.

This week, the defense minister plans to present a detailed report to the German parliament on his cancellation of the Euro Hawk drone program, a move which means that over €500 million ($652 million) in German taxpayer money was wasted. It seems unlikely that his presentation will do much to reduce the pressure under which he currently finds himself.

On the contrary. De Maizière must now determine whether Germany will continue as a primary participant in NATO's Global Hawk program, an important strategic project that involves the acquisition of five aircraft that are virtually identical to the Euro Hawk drones. He is scheduled to meet with fellow NATO defense ministers on Tuesday.

The defense minister is likely to be faced with several uncomfortable questions. Berlin has long been one of the primary advocates behind the NATO surveillance drone program and is involved in the project, known as Alliance Ground Surveillance (AGS), to the tune of €480 million. In April 2012, de Maizière described the program as a "litmus test" for the alliance -- and from Berlin's perspective, he wasn't wrong. After all, Germany had declined to support NATO's Libya intervention the year before and was eager to prove that it could still be a reliable ally.

But de Maizière's show of support for the drone program came just two months after top Defense Ministry officials learned of the serious problems facing Germany's own surveillance drone program in the report from February of 2012. Just a few weeks ago, he once again emphasized Berlin's commitment to the Global Hawk program.

Doubts are increasing in Brussels, though. "Were the Germans to back out," said a high-ranking NATO general, "it would be a catastrophe for the alliance."

Even worse, as recently as this April, the Defense Ministry in Berlin was still trying to keep damning details on the drone program from Germany's allies. A report for senior ministry officials on the problems facing the surveillance drone project from April 29 makes clear that the information is not to be shared. "Our partners will receive no detailed information about the surveillance results and thus about the real capabilities of the system as a whole," it said. The report was marked confidential, with a further note adding "only for Germans."

The fundamental problem facing the drones is that there is little prospect that they will receive the allowances they need to fly in European airspace. The reason is the drones' lack of a so-called "collision avoidance system," a standard safety feature that allows aircraft to detect other aircraft independent of ground-based equipment and to propose avoidance maneuvers to pilots. Adding such a warning system, according to the 2012 Defense Ministry report cited above, would cost hundreds of millions of euros.

In the US, the lack of such a system is not insurmountable for military aircraft. With plenty of empty space, test flights are simply performed in remote areas and airspace in the area is simply closed. Given Germany's greater population density -- and aircraft density -- such closures are more problematic.

And when it comes to the Euro Hawk, even US officials were unconvinced of its airworthiness. When the first prototype was delivered from manufacturer Northrop Grumman in California to Germany in 2011, US officials refused to grant it overflight rights, making it necessary to fly over Canada and Greenland. During the flight, the drone's ground-based pilots lost contact with it twice for extended periods.

German Defense Ministry officials are also well aware of the dangers associated with the lack of a collision avoidance system. Nine years ago, a German surveillance drone known as a Luna -- essentially a large model airplane weighing some 40 kilograms (90 pounds) -- nearly slammed into an Airbus belonging to the Afghan airline Ariana as the passenger jet was approaching the Kabul airport. A video of the incident filmed by the drone shows that the distance between the two aircraft could not have been much more than a couple of meters. Had they made contact, the Airbus almost certainly would have crashed. 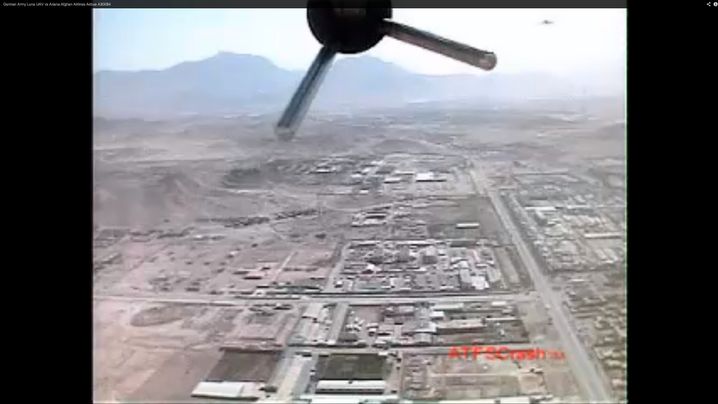 Photo Gallery: The Near-Collision over Kabul

The German military was aware of the video's significance; the original was immediately marked top secret and filed away. Yet somehow, the images found their way onto YouTube where the video is marked "Mishap, Hoax or Terrorism?" Defense Ministry officials in Berlin say that the incident made it clear to all just how important an anti-collision system is.

Furthermore, a feasibility report compiled in 2004 by the European defense giant EADS -- which developed the surveillance equipment for the Euro Hawk drone -- for the German military noted that "extensive authorization and certification" would have "an effect on the timeline and costs." EADS suggested that the contract with Northrop Grumman go into great detail in paragraphs regarding aircraft certification.

Yet the recommendation was ignored. When the contract for the Euro Hawk drone was signed with Northrop Grumman in 2007, there is no mention of an anti-collision system at all.

The contract, of course, was signed well before de Maizière took over the defense portfolio in Merkel's cabinet in 2011. But he has had more than enough time to take a critical look at the program and has seen plenty of evidence that it should have been stopped well before this spring. Yet he admitted himself in a recent conversation with confidants that his ministry had pinned its hopes on being granted a special permit allowing drone flights. He only cancelled the program when it became clear that these hopes were in vain.

The delay was an expensive one, costing German taxpayers millions of euros, with more losses potentially on the horizon should the NATO Global Hawk program fall victim to the same certification concerns. The biggest loser, however, may ultimately be de Maizière himself. 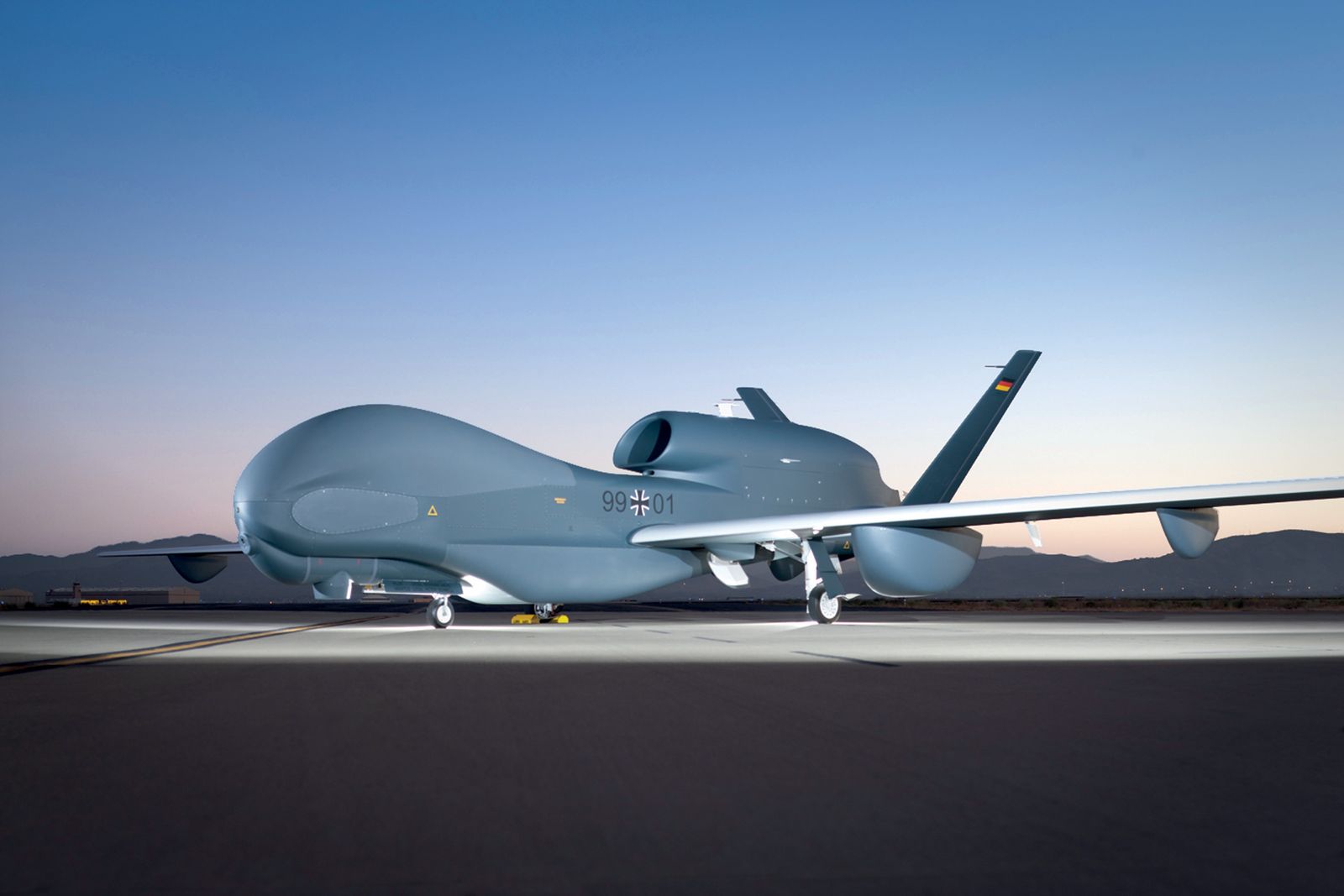 Germany's drone program has cost hundreds of millions and may take the defense minister down with it.