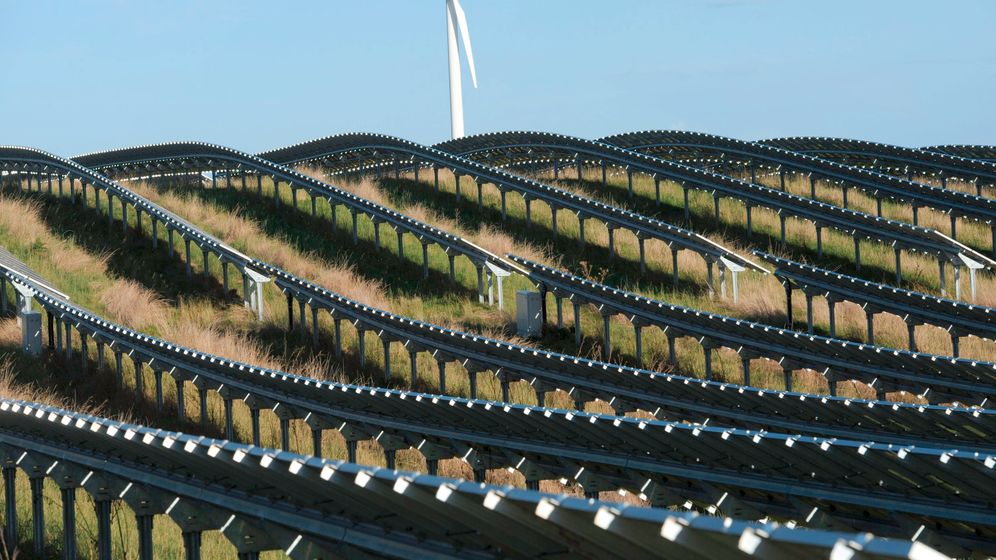 SPIEGEL: Mr. Kohler, according to the government's plans, the last German nuclear power plant will go offline in 2022. What will the domestic power supply look like at that point?

Kohler: It will be interesting. It's easy to shut down a nuclear power plant, but that doesn't mean you have something to replace it with. We know today, for example, that we don't have enough reliable power plant capacity in southern Germany to be able to offset the loss of nuclear energy.

Kohler: When a new wind farm is opened and we're told how many thousands of households it can supply with electricity, that number applies to only a quarter of our demand. In Germany, 75 percent of electricity goes to industry, for which a secure supply -- that is, at every second, and with constant voltage -- is indispensable. Neither solar nor wind power are suitable for that purpose today. Both fluctuate and provide either no secure supply or only a small fraction of a secure supply. Solar energy has a load factor of about 1,000 hours a year. But there are 8,670 hours in a year.

SPIEGEL: But on some days solar power is already enough to supply all of Germany with electricity.

SPIEGEL: Is that so dramatic? It's better to have a surplus than a shortage.

Kohler: I don't want to bore you with the details, but a surplus and fluctuations lead to very unpleasant systemic effects. We have voltage fluctuations within the grid that create problems for industry. Or we overload the grids in neighboring countries. Poland is in the process of installing technical equipment to protect its grids by keeping out surplus German electricity.

SPIEGEL: So far the prognoses that anticipated possible blackouts during peak load times have not come true. Weren't the concerns, including yours, exaggerated?

Kohler: We were lucky in the winter of 2012. By 2015, we will manage to secure the current power supply with old power plants. Then a number of large power plants in southern Germany will gradually go offline, starting with Grafenrheinfeld in Bavaria. If we don't act very quickly now, the reality will show us that we face real problems.

Kohler: We have to make sure that operating power plants remains economically attractive. Nowadays, solar systems are often in operation around noon, when there is high demand for power and the price was high in the past. As a result, conventional power plants can no longer make enough money, which is why existing plants are being shut down and no new ones are being built. Anyone who guarantees the security of supply in the future has to be paid for it, even if his power plant is only needed at certain times.

SPIEGEL: Some receive subsidies for supplying green energy, while others are paid so that they'll be available in case it rains or the wind doesn't blow. It doesn't sound very market-based.

Kohler: It can indeed be organized in a market-based way throughout Europe by using so-called capacity markets. But that doesn't do any good. We have to synchronize the addition of more solar and wind energy systems with an expansion of the overall system, or the energy revolution will be a failure.

SPIEGEL: So no more wind turbines or solar roof panels until the infrastructure is up and running?

Kohler: That isn't politically feasible. But we can make sure that the expansion of renewable energy is managed in a sensible way. That means that we have to put an end to the completely unstructured installation of solar systems as soon as possible.

SPIEGEL: If you don't want to stop the expansion, what do you want?

Kohler: Today anyone can build a solar power system wherever he wants. And anyone who owns one of these systems also has the right to be connected to the grid operator. Just take a drive through Bavaria, and you'll see entire fields full of solar power plants, even though there is zero consumption there and there is no grid. Solar systems should be expanded only in places where the electricity is needed and there are grids that can absorb it; in other words, in industrial areas, on stadium roofs and at indoor swimming pools. To that end, I would propose that the grid operators provide a map of available grid capacities.

SPIEGEL: So no more subsidies for solar arrays in the countryside?

Kohler: Exactly. A grid map would give us the opportunity to control the installation of additional solar systems to minimize additional grid costs. And it would also give us a tool to finally prevent too much power from migrating into the grid. Under the current circumstances, we have to invest about €28 billion ($36 billion) in the distribution grid to integrate renewable energy, while we have entire areas where there is still available grid capacity.

SPIEGEL: Does this also apply to wind turbines?

Kohler: Of course. Nowadays wind energy is mostly generated where it isn't needed, that is, in the north. But the power lines that are supposed to carry this electricity to the south only exist on paper at the moment. I would propose that we permit the construction of more wind farms only once the power lines have actually been built.

SPIEGEL: So it would be best to stop work on the offshore wind farms in the North Sea and Baltic Sea immediately?

Kohler: No, but their additional expansion has to be tied to the expansion of the power grids. For example, the northern state of Schleswig-Holstein should be told: You can build additional wind turbines only once the power line to southern Germany is complete, so make an effort to make that happen. So far the expansion of power lines has often been blocked by objections from the environmental movement, that is, the people who staunchly promote the development of renewal energy. When things go wrong, they give themselves an environmental halo and blame the grid operators.

SPIEGEL: Maybe it just isn't a good idea to install solar panels everywhere in a country like Germany, which has relatively little sunshine, or to build wind farms in northern Germany, where there is hardly any industry.

Kohler: I support the expansion of solar and wind energy, but only when it makes economic and technical sense. The operator of a solar plant should be getting a message, namely that it's up to him to market the electricity he produces. He should come up with his own ideas to sell the electricity, and he shouldn't be subsidized.

SPIEGEL: You would get rid of Germany's Renewable Energy Act?

Kohler: It is pure insanity! You put a solar panel system on your roof and, thanks to government guarantees, you don't have to do anything more except make sure that you clean the snow off the panels in the winter. We now have to say to everyone who benefits from this feel-good law: Listen, people, it can't go on this way!"

SPIEGEL: At least renewable energy sources have led to the price of electricity coming down on the markets, because they have displaced expensive conventional power plants.

Kohler: There was that positive effect of more expensive power plants being displaced. But now it's going in the opposite direction, because the power being generated often exceeds demand. Every new solar or wind energy system that we cannot integrate in a way that makes sense has a negative impact on the system, both economically and technically.

SPIEGEL: How realistic are the federal government's forecasts when it comes to electricity demand and generation?

Kohler: In the 1970s, they believed that there is an annual 6-percent linear increase in the demand for electricity. That number was used to estimate how many nuclear power plants had to be built. It was also the reason I went to work for the Institute for Applied Ecology (Öko Institut) in Freiburg at the time. I thought the calculations were fundamentally wrong. Today we have a solar and wind euphoria, instead of a nuclear euphoria. We believe that there will be a 10-percent decline in electricity consumption by 2020. And, once again, we assume that this change will be linear. But I'm sure that we're probably going to be wrong this time, too.