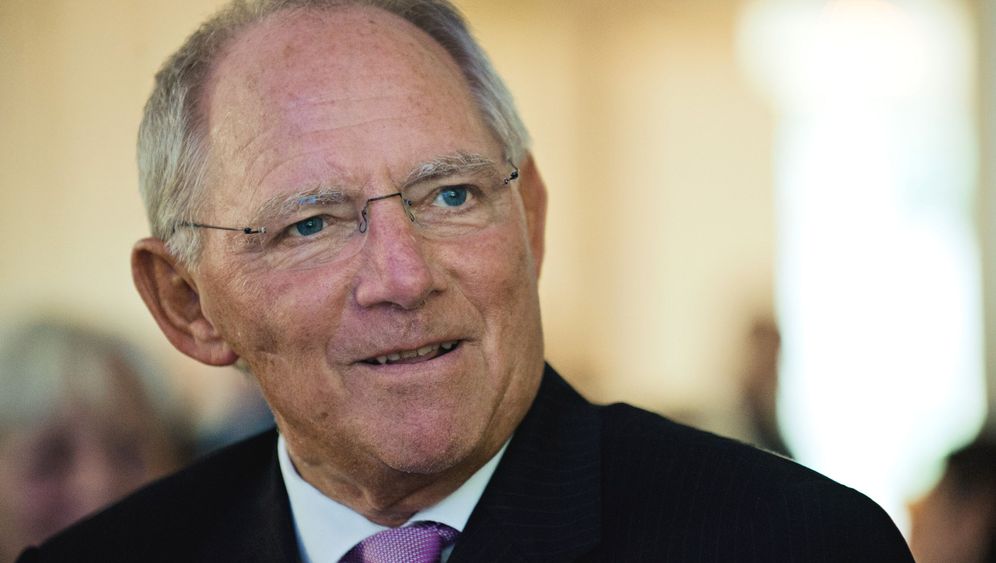 Wolfgang Schäuble, Germany's finance minister who turned 70 on Tuesday, had the two greatest goals of his political life within his grasp -- but they were both denied him. He didn't become chancellor or president. Does that still plague him today?

It was his quandary that his political fate was so closely intertwined with Helmut Kohl, his erstwhile mentor. Kohl had no intention of smoothing Schäuble's path to the chancellorship. And when Kohl fell, he tore Schäuble down with him. They're both to blame -- they were chained together, in the good times and the bad.

The donations scandal that rocked their party, the Christian Democratic Union (CDU), marked a turning point in Schäuble's political biography. In December 1999, he initially denied in parliament that he had received money from the "businessman" Karlheinz Schreiber, but then conceded receiving 100,000 deutsche marks for the CDU. He later publicly apologized for having concealed his relationship with Schreiber.

After his rift with Kohl, Schäuble refused to speak to the former chancellor. Kohl too avoided his former heir apparent and continues to do so -- he turned down the CDU's invitation to Schäuble's official birthday party without giving a reason.

Kohl thwarted Schäuble's bid for the chancellorship. But Schäuble overcame his fall from grace and made a comeback, steering Germany through the financial crisis and then the euro crisis as finance minister.

In 1990, a mentally deranged gunman had shot him at an election campaign meeting. Doctors battled to keep him alive. They saved him, but he has been confined to a wheelchair ever since.

In 2004, Angela Merkel refused to nominate him as her candidate for the presidency and instead opted for Horst Köhler, man who paled in comparison to Schäuble. The fact that Schäuble later joined her cabinet is a sign of his enormous self-discipline -- which is probably his most significant attribute. At the time, he bore Merkel a deep grudge, his biographer Hans Peter Schütz said.

It was often plain to see that he would have liked to be at the helm himself. But Schütz is right to ask in his book whether Schäuble, despite all his abilities, would really have been suitable for the top job.

He's definitely a cunning tactician and a consummate politician, as he has proven in his many official positions. He was in his element as Kohl's chief of staff and profited from the chancellor's aversion to political details. Schäuble had a free hand, and he seized the opportunities given him and did a good job.

His masterstroke was the unification treaty between East and West Germany. And he deserves credit for the smooth and peaceful way in which the two parts of Germany were reunited. That is and remains the great achievement of his life.

In his current job as finance minister, he draws a certain satisfaction from his role as Europe's treasurer -- without his blessing, not much can happen in the continent's financial affairs.

But there are contradictions here. He has given many interviews stressing the European philosophy that monetary stability must have total priority. At the same time, though, he has signalled that he supports European Central Bank Mario Draghi rather than the Bundesbank chief Jens Weidmann, a staunch opponent of the bond buys. Against Schäuble's will there would have been no state financing through unlimited ECB bond-buying in the crisis-hit nations of Southern Europe.

No one, not even Merkel, knows what Wolfgang Schäuble really thinks and feels. Despite that, or perhaps because it, he continues to fascinate people.

That explains why his personal approval ratings are consistently high. His struggle with his disability moves people, and they like the clear, succinct, calm way in which he explains policies. That too accounts for his political success. He can be extremely charming when he wants to be. He can win over people, and he exudes a natural authority.

The Two Sides of Schäuble

But he has another side too. He once humiliated his former press spokesman Michael Offer by chastising him in front of a room full of reporters for failing to distribute briefing notes in time. It was an unpleasant demonstration of his power.

Hans-Jochen Vogel, the former leader of the opposition Social Democrats, once said the assassination attempt had turned Schäuble into a bitter man. That remark annoyed Schäuble, but critical observers will note that this assessment isn't entirely wrong.

There are two Schäubles. The smiling, competent euro savior on the one hand, and the cold power politician who cut his teeth under Helmut Kohl. Either way, he is an exceptional politician.