In mid-October in a Wetzlar church hall, about 200 visitors sat in rows of tightly packed chairs, leaning against the walls with their arms crossed and sullen expressions on their faces, or standing in front of the open doorway, hoping to hear at least some of what was being said at an event that will have a significant impact on their lives. Some stood under open umbrellas, a symbolic gesture meant to convey the message that they don't want to be left standing out in the rain.

The issue being discussed that evening in Wetzlar, a city in the western German state of Hesse, was not the future of a local company or student tuition, but the free food programs at the city's food bank, called the Wetzlarer Tafel. The organization that runs the operation is short on funds to pay for its fleet of vehicles and volunteers. About 4,200 people, including recipients of Hartz IV welfare benefits, asylum seekers and others in need, are dependent on the charity. "We can't make it on our own," says director Harald Würges. "We need a solution so they won't go hungry."

There were a number of similarly dramatic appeals on this evening, and they made an impression on a group of local politicians sitting at a long table. In early December, the city of Wetzlar allocated a subsidy of €14,000 ($19,000) to the food bank. "It's a good start," says Würges, "but we're not quite out of the woods yet."

Würges and many other representatives of 917 other food banks and soup kitchens in Germany share the same fear over their future. Across the country, food pantry workers, most of them volunteers, are sounding the alarm that charitable donations are no longer enough to pay for storage space, delivery trucks and rents. Some are also having trouble stocking enough food to satisfy demand. In Hamburg, for example, food banks have been forced to turn some people away in recent weeks.

Pantry volunteers and employees blame the plight on the fact that increasingly more people have come to depend on free meals. They also say that people have become less inhibited when it comes to publicly admitting to poverty and having to rely on charity.

But the growing demand for food-pantry services is only part of the story. The charity movement has also made mistakes that would force a seasoned business enterprise to its knees: growing too fast and turning away from its core business.

In some places, charitable organizations have expanded their services and taken on some of the responsibilities of the social welfare state. In addition to offering free meals, some now provide training programs to help welfare recipients improve their job-seeking skills, cooking classes and childcare for single mothers.

In many instances, the food-pantry movement no longer has much in common with the laudable volunteer initiative that developed in major cities about two decades ago. At the time, a few volunteers, using their own cars, would spend hours collecting food for the needy in supermarkets and restaurants: day-old bread, bruised fruit and dairy products approaching their expiration dates. The volunteers wanted to get involved and do good deeds for the needy. The media portrayed them as charitable workers helping to feed the poor. It was a niche project.

But that was before Germany's Hartz IV welfare reform program came into effect. Troubled by news reports on the adverse effects of the new legislation, well-meaning citizens established food pantry associations throughout Germany, even in towns with less than 10,000 inhabitants and unemployment levels below 5 percent. The food pantry movement grew into a social giant than now has some 60,000 volunteers, fleets of vehicles and about 3,000 actual food banks -- a larger network of branches than the Penny discount supermarket chain.

Supply and demand continued to grow. In the last five years, the number of people who receive meals for free or in return for a small contribution has approximately doubled to about 1.5 million.

This would hardly be a dramatic figure if the donations coming from grocers had grown at roughly the same pace. But large supermarket chains and small retail grocery stores have improved their inventory planning, removing far fewer items from the shelves and discounting items that are about to expire. The food-pantry trucks are still getting enough fruits and vegetables, says Heike Vongehr, head of the Düsseldorf food pantry, established in 1994. But, she adds, there has been a steady decline in the supply of pasta, dairy products and meat -- precisely the products that are in great demand among pantry customers.

Vongehr, 70, a pioneer of the German food-pantry movement, fears that the situation will get even worse in the coming years. One reason, she explains, is that more students are using food banks in Düsseldorf and other university cities. Turning them away would be unfair. On average, university students in Germany have a monthly income of only €864, which, according to the criteria of the German Federal Statistical Office, makes them just as "vulnerable to poverty" as Hartz IV recipients and many retirees.

Another development that worries food bank volunteers is the fact that Bulgarian and Romanian nationals will enjoy freedom of movement for workers as of Jan. 1, 2014. "We are about to face new challenges," says Vongehr. One possible solution, she explains, is to reduce portion sizes, but even that creates potential problems, with recipients already complaining about not getting enough food at many pantries. Because of rising tensions at their facilities, food pantries in Berlin have enrolled some of their workers in conflict management courses.

Some improvement could achieved if individual pantries would distribute the food they collect more effectively among themselves. In some regions, food pantries and other charitable institutions are even competing for the goodwill of grocers. The losers are forced to send their customers home with reduced portions, while the organizations that come out on top are able to expand their range of products and services.

One person able to provide his customers with the best is Wolfgang Nielsen. On a recent morning at 9 a.m., the chairman of the food pantry in the western city of Wuppertal provided a tour of his organization's extensive grounds in the city's Barmen neighborhood. The first stop was the cafeteria, which was almost as big as a gymnasium. Pop music played quietly in the background as guests at the breakfast buffet chose from among nine types of cold cuts and cheese. And thanks to "excellent" cooperation with local bakeries, Nielsen noted enthusiastically, the Wuppertal food pantry has "the best selection of bread and cake in the Bergisches Land region."

Visitors to the food pantry are not charged for their meals, nor are they required to prove their status as Hartz IV recipients or low-wage earners. In theory, any resident of Wuppertal can come to the pantry for breakfast and stay until lunch, which is also free, as is dinner.

Nielsen, 63, and his staff distribute "about 1,000 portions" each day of the week in their cafeteria. They also run a separate "children's pantry," which provides after-school daycare services for Hartz IV recipients and other parents who qualify as needy. "It's a popular service," says Nielsen. Parents who prefer to cook for their own children are given food to take home. Crime rates have declined in Wuppertal because of the food pantry, says Nielsen. According to the police, shoplifting has also gone down since the facility began distributing free meals.

About 500 kilometers (310 miles) away, Jochen Brühl, 47, the new chairman of the German Federal Association of Food Pantries, is sitting in a conference room in Berlin. He is somewhat critical of the all-inclusive world of the Wuppertal pantry. Food pantries shouldn't really be "full-service providers," he says. As Brühl points out, "the supply situation varies widely from region to region." In eastern Germany, in particular, pantries are having trouble serving all of their customers.

Brühl and his staff at the federal association are trying to develop a structure capable of handling future challenges. They conduct outreach activities, manage major suppliers like the Lidl and Rewe supermarket chains and provide volunteers with fundraising training. They have almost no say in the day-to-day operations of individual pantries.

Brühl has had good experiences with a model used at the food pantry in his hometown of Ludwigsburg, near Stuttgart. The Ludwigsburg facility, along with several others in the surrounding state of Baden-Württemberg, no longer offers food for free.

Each item has a price. A cup of yoghurt costs 5 cents, bread costs 20 cents and a portion of fruit is priced at 30 cents. Experiences with the new system have been "overwhelmingly positive," says Brühl. One of the reasons, he adds, is that pantry visitors are now real customers.

In Munich, too, food pantries have abandoned their old principles. In the past, pantries only distributed items that food producers, supermarkets and other merchants were no longer willing to sell. To maintain standards for their roughly 18,000 weekly customers, food pantries in the Bavarian capital see themselves forced to take a path that would have been viewed as a betrayal of the movement's fundamental principles in the past: Buying large amounts of additional food, paid for with donations. 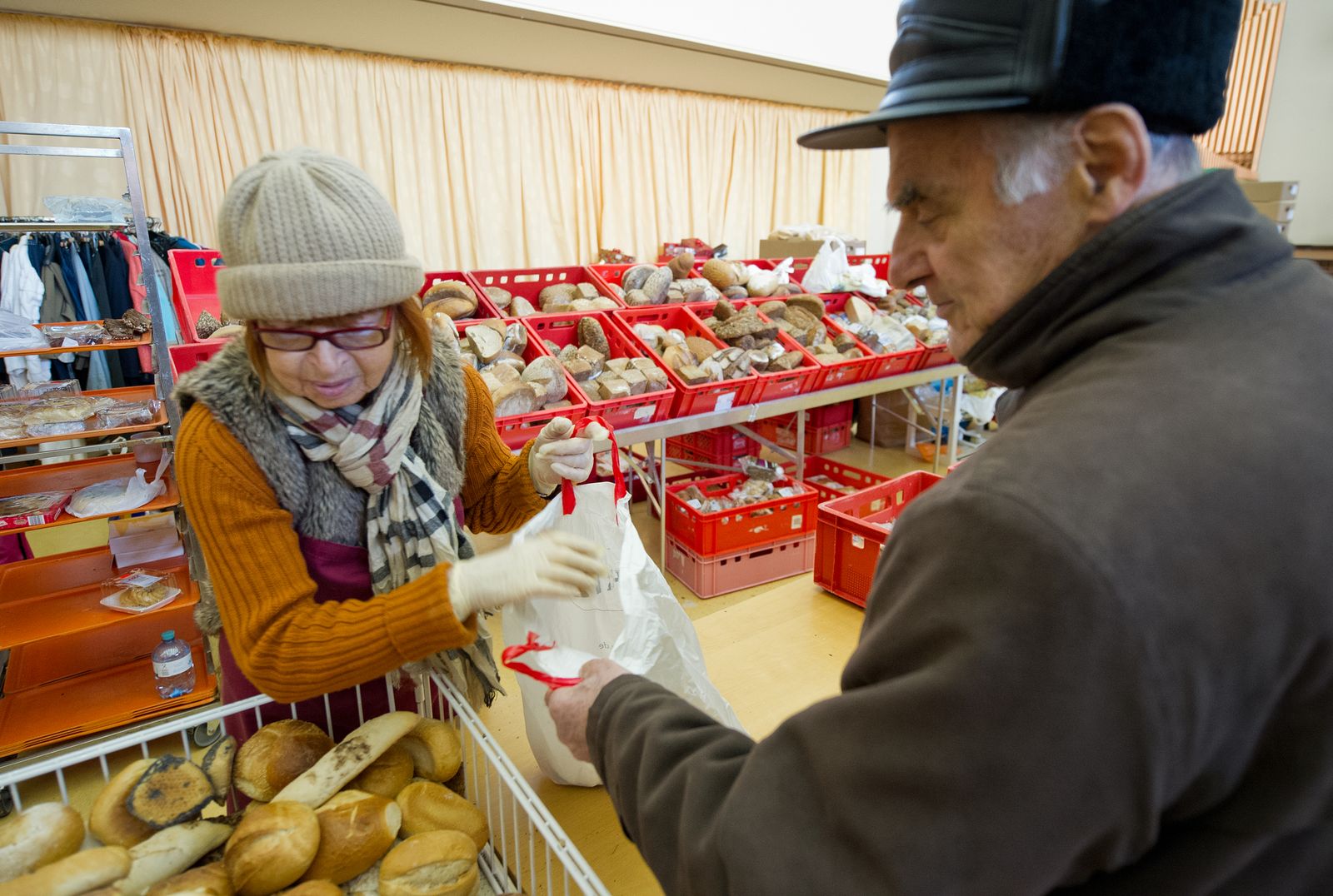 A food bank for the needy in Wiesbaden.