SPIEGEL: The EU wants to increase sanctions against Moscow step by step. What gives you hope that the continuation of a policy which has failed to deliver the desired results over the past several months will now lead to success?

Steinmeier: There are no guarantees in diplomacy, and this applies especially to crisis situations. The fact that we haven't achieved a sustained de-escalation does not, however, mean that a different course of action would have been more successful. I don't know if Russia wants to be our partner or our adversary. We will have to see. What is certain is that it will remain Europe's neighbor, and you have to be able to talk to your neighbors. That's why our course is the right one. We will increase the pressure but we will at the same time be prepared to negotiate a de-escalation of the conflict with Russia. After the tragedy of MH 17, the deaths of almost 300 people who were innocent and in no way involved in the conflict, and after the undignified actions of the marauding separatists at the site of the crash, we were all convinced that new, substantial measures were the correct answer to an insufficient readiness on the part of Russia to seal its borders with Ukraine and exercise its influence on the separatists.

SPIEGEL: In practical terms, the imperative of European unity means that sanctions can only be strengthened in lockstep. Is that still the right strategy given the ongoing military conflict and the MH 17 tragedy?

Steinmeier: We're already way beyond that. We, the EU foreign ministers, have charted the course and shown great unity in our decision to increase pressure. On Friday, the sanctions lists were expanded to include companies and state institutions for the first time. In a few days, we will also have the formal basis for sanctions against political string-pullers and supporters. Economic measures are also on the table. We want to spread the burden fairly with targeted rules that can be strengthened or reduced when Russia moves. We hope to make decisions about them in the coming days.

SPIEGEL: Why doesn't the German government want to strengthen sanctions on its own?

Steinmeier: We can only send Moscow the clear message that is needed when all 28 member states work as one. And when it comes to arms deals, it should be noted that Germany stepped into the lead months ago.

SPIEGEL: Is German industry urging the government to practice moderation when it comes to sanctions?

Steinmeier: There is no question about the primacy of politics. Eckhard Cordes, the head of the Committee on Eastern European Economic Relations (eds. note: an organization representing German business interests in Russia), recently said that industry supports our position 100 percent. Of course we also exchange views with industry and take their concerns seriously when we reach decisions.

SPIEGEL: Is Berlin pleased about its role as the final bridge to Vladimir Putin because it can also be used as a reason for Germany to be more reserved than many Eastern European countries in the EU debate over increasing sanctions?

Steinmeier: Those forced to live under the yoke of the Soviet Union have a different view of Russia than our Western European partners along the Atlantic coast. We are somewhere in between, with our history of having been a divided country, and we approach this role with responsibility. We have always maintained contacts with Moscow and continue to do so because we need them. I will never tire of repeating that European peace is at stake. This conflict could have unforeseeable consequences for all of Europe.

SPIEGEL: Is there a point at which increased EU sanctions could lead the Russian side to react militarily?

Steinmeier: What we expect from the Russian leadership is neither new nor excessive: We want it to respect Ukraine's sovereignty and to not undermine its territorial integrity. What we need are effective controls at the border to Ukraine in order to prevent the infiltration of fighters and weapons as well as a lasting cease-fire that will make negotiations for a political solution possible. I am certain that if external support in the form of money, fighters and weapons is stopped then the separatists' resistance will collapse. I am even more certain that the people of eastern Ukraine recognize that these armed thugs do not represent their interests.

SPIEGEL: Why are the Americans imposing tougher sanctions than the Europeans?

Steinmeier: President Obama is freer when it comes to the decision he makes because of a different legal culture. For us, it's not enough to have an agreement between 28 states. Our decisions have to be able to bear up to legal reviews that can go all the way up to the European Court of Justice. Added to this is the fact that the political, economic and societal links between Europe and our Russian neighbor are far tighter. 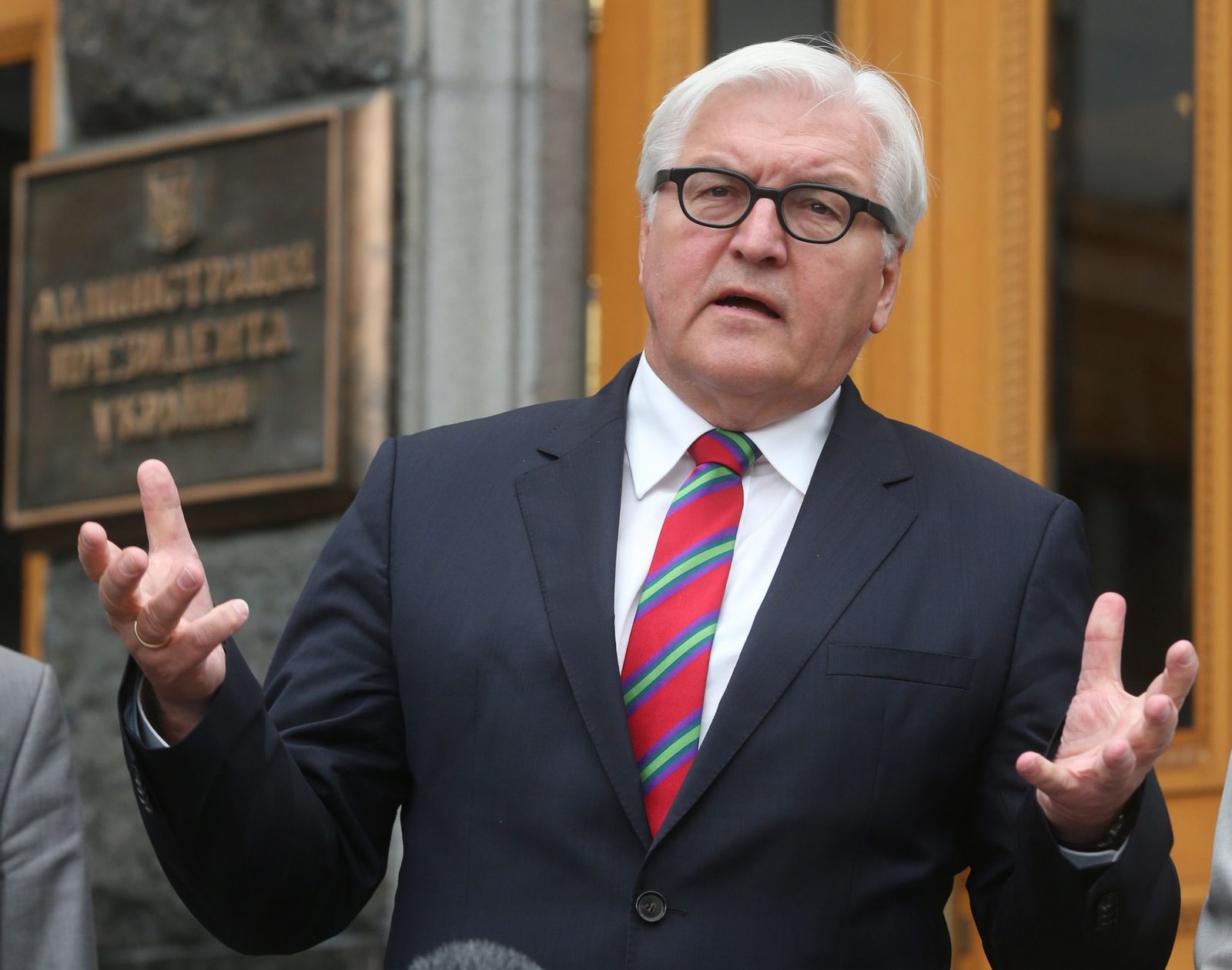 German Foreign Minister Frank-Walter Steinmeier during a June visit to Ukraine: "What we expect from the Russian leadership is neither new nor excessive."