German Foreign Minister Frank-Walter Steinmeier has high hopes for an improvement in US-German relations under the new administration of President Barack Obama. The chances of those hopes being fulfilled will become clearer over the next few days, after Steinmeier's meeting Tuesday with his US counterpart Hillary Clinton and this weekend's Munich security conference. 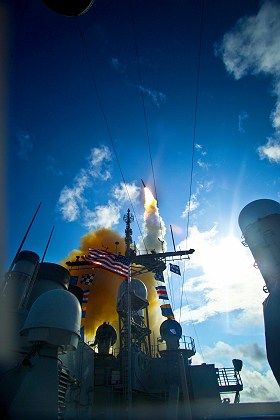 Disarmament is one of the top issues on Steinmeier's agenda.

Steinmeier, who has been noticeably keener to engage the Obama administration than German Chancellor Angela Merkel, was upbeat about trans-Atlantic relations as he prepared for his trip. "I am now finding dialogue partners for issues where they were previously hard to find," he said Monday before leaving for the US. He told reporters during his flight to Washinton that he wants to push for a "new trans-Atlantic agenda," which would include arms control, energy security and climate change.

Steinmeier will be the first member of Merkel's cabinet to be received by the new US administration. As well as talking to Clinton, who was sworn in on Monday, Steinmeier will also meet with Obama's national security adviser, James Jones. It is not clear if he will also meet with the president. Among other issues, Steinmeier and Clinton are expected to discuss the forthcoming NATO summit in April, the global financial crisis, climate change, the situation in the Middle East, Iraq and Afghanistan.

Disarmament is also an issue close to Steinmeier's heart. In an article to be published in the Wednesday edition of the newspaper Süddeutsche Zeitung, Steinmeier expresses his hope that progress can be made on the issue "after a years-long blockade by President George W. Bush." Specifically, Steinmeier would like to see action on producing a successor agreement to the START 1 treaty on strategic nuclear weapons, which expires in 2009, and also for the US Senate to ratify the Comprehensive Nuclear Test Ban Treaty. During her recent hearing before the Senate Foreign Relations Committee, Clinton said she would push for progress on both issues.

Steinmeier would also like to see the Obama administration roll back American plans for a controversial missile defense shield with installations in Poland and the Czech Republic. The missile shield, a brainchild of former President George W. Bush, has caused friction between the US and Russia. "I expect all the sides in the controversial question of the planned US missile shield in eastern Europe to get together to discuss the issue. My position remains: Where there is a common threat, common answers are also possible," Steinmeier wrote in the article, which is timed to coincide with the Munich security conference. The closely watched conference starts Friday and will be attended by US Vice President Joe Biden and James Jones.

In the article, Steinmeier wrote that the fact that Russia had backed away from plans to station Iskander missiles in the Russian enclave of Kaliningrad was a positive signal. Steinmeier also called for the NATO-Russia Council to be re-activated. The council's work was suspended after Russia's military conflict with Georgia in August 2008. "We urgently need the council as a forum for dialogue, especially in difficult times," Steinmeier wrote.

The German foreign minister also welcomed Obama's recent offer of dialogue with Iran over its nuclear program, but said that disarmament was also key to stopping nuclear proliferation. "Only when the nuclear powers are prepared to reduce their arsenals will we also be able to prevent nuclear proliferation on a sustained basis," he wrote.

Steinmeier plans to invite high-ranking experts to a meeting in Berlin in June to discuss the possibility of saving the Conventional Forces in Europe Treaty, which Russia suspended in 2007. In an open letter to Obama published in SPIEGEL in January, Steinmeier said the CFE treaty, which puts upper limits on certain types of conventional weapons in Europe, "must be urgently reformed and preserved."