Sunday's election dealt a devastating blow to the pro-business Free Democrats, who secured a paltry 4.7 percent of the vote, the worst showing in its history. As the country's third-largest party, the FDP has reliably made it into parliament for decades. But not this time, according to projections.

Four years ago, led by Guido Westerwelle, the party romped to triumph with its best-ever result -- 14.6 percent -- and assumed power as junior coalition partner to Angela Merkel's Christian Democrats (CDU). But the subsequent four years proved turbulent and voters soon tired of the FDP's broken promises.

In the past week, the party's last-ditch "second vote strategy," which saw it appeal to center-right voters to "loan" them one of their two votes, smacked of desperation and did nothing to mobilize support. The stony faces at the Berlin Congress Center on Sunday evening said it all -- the FDP's worst fears had come true.

Not only will there be no second act as Merkel's junior coalition partner, but the FDP has failed to clear the 5 percent hurdle needed to send deputies to parliament.

Party leader Philipp Rösler and the party's top candidate, Rainer Brüderle, wasted no time announcing they would be taking responsibility for the fiasco. The next few days will presumably be spent preparing their retreat. Rösler's departure as FDP head, a position he held for a mere 18 months, is only a matter of time. He himself is well aware that the party will want him to move fast so it can press ahead with the urgent task of reinventing itself. And a new identity will require not only new ideas but new faces.

That the party was coming unstuck was already apparent in the Bavarian elections last week, when it lost its seats in the state legislature. The FDP opted to cut its losses and implored CDU voters to split their vote to help push it cross the five percent threshold.

It was a desperate measure, and inevitably drew criticism. Not only did Merkel refuse to back it, there were objections even within the party's own ranks. Wolfgang Kubicki, one of the FDP's leading figures, openly rejected the second-vote strategy. "We shouldn't be begging for CDU supporters' second votes but confidently promoting our own agenda," he said last week.

Until now, the party's worst showing was in 1969, when it drew just 5.8 percent of the vote under Walter Scheel's stewardship. But even that was enough to launch it into a coalition with Willy Brandt's Social Democrats. The FDP has been an integral part of postwar Germany's political landscape, spawning some political greats from Scheel to Hans Dietrich Genscher and Otto Graf Lambsdorff.

Now, however, it's reduced to a role in the extra-parliamentary opposition, and many within the party are reeling in shock.

Out With the Old, In With the New

What next? The Free Democrats might find they have to review the program that stood them in good stead for so long. But apart from low taxes and deregulation, the party's agenda has become less than clear. It often seemed as if its primary motivation in this election campaign was merely to prevent a center-left coalition.

When Rösler took over the party reins in May 2011, he insisted the FDP should never again exist to serve another party. But ultimately, this is what it did -- and as of this weekend, it no longer even fulfils this role, seeing not only the CDU steal some 2.2 million of its voters but also the anti-euro Alternative for Germany (AfD) drain away its support.

At least the FDP is well-versed in throwing out the old and ushering in the new. In 2011, Rösler's predecessor Guido Westerwelle stepped down in response to the party's flagging fortunes to make way for a generational shift. The most likely new man at the top is Christian Lindner, the FDP state leader in North Rhine-Westphalia, where the party is still in the state parliament.

The road ahead of him will be a rocky one. What sort of a party does the FDP need to become? Is it destined to return to its traditional role as kingmaker for the CDU, the part it has so often played, or could it contemplate coalitions with the SPD and the Greens? In-fighting is the last thing the party needs right now.

How quickly the tables can turn was rudely spelled out to the Free Democrats on Sunday evening, when Rainer Brüderle found himself unceremoniously left out of the traditional election night post-mortem on Germany's two public broadcasters.

"We only invite the parties that cross the 5 percent hurdle," said ZDF producer Peter Frey. 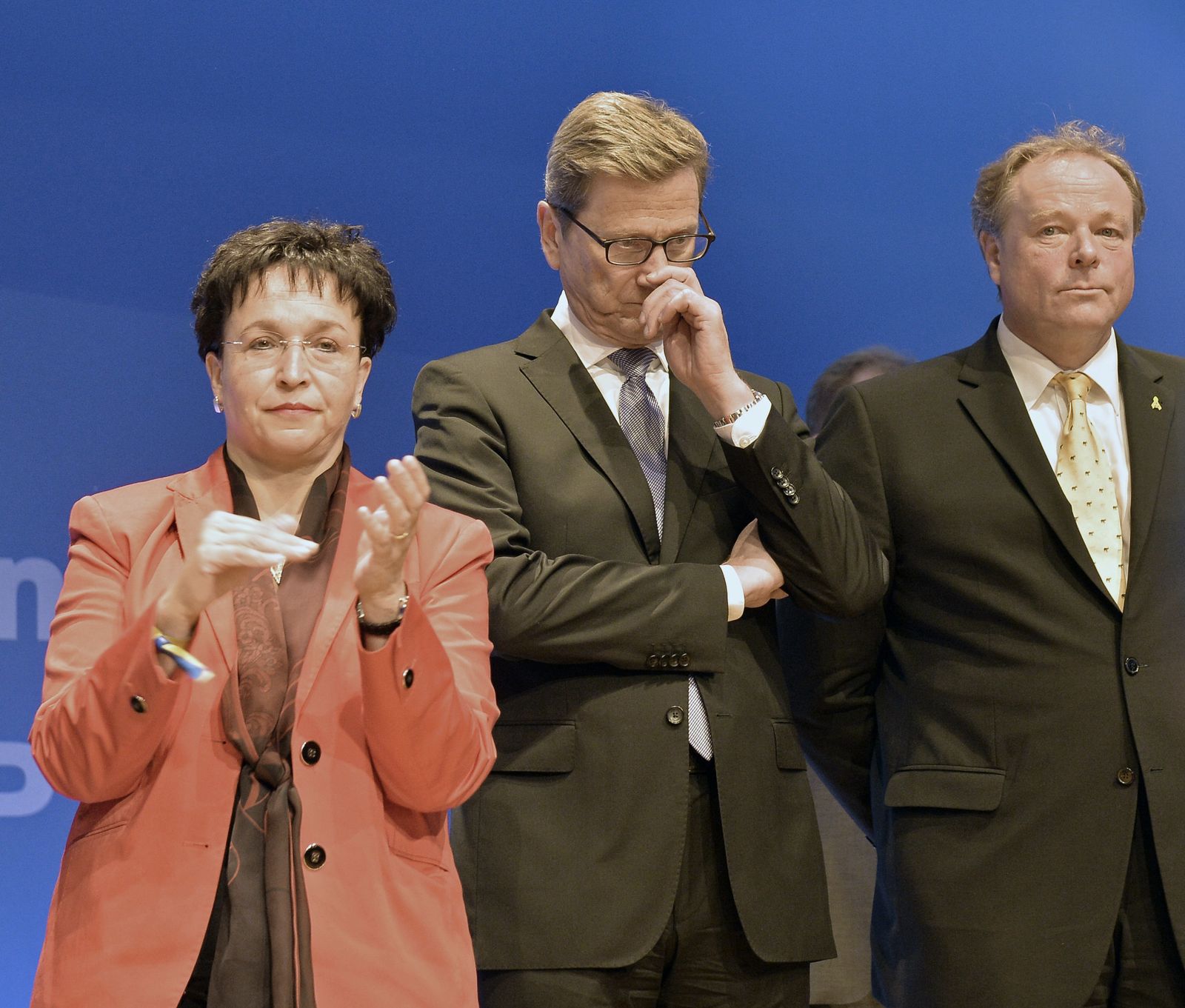