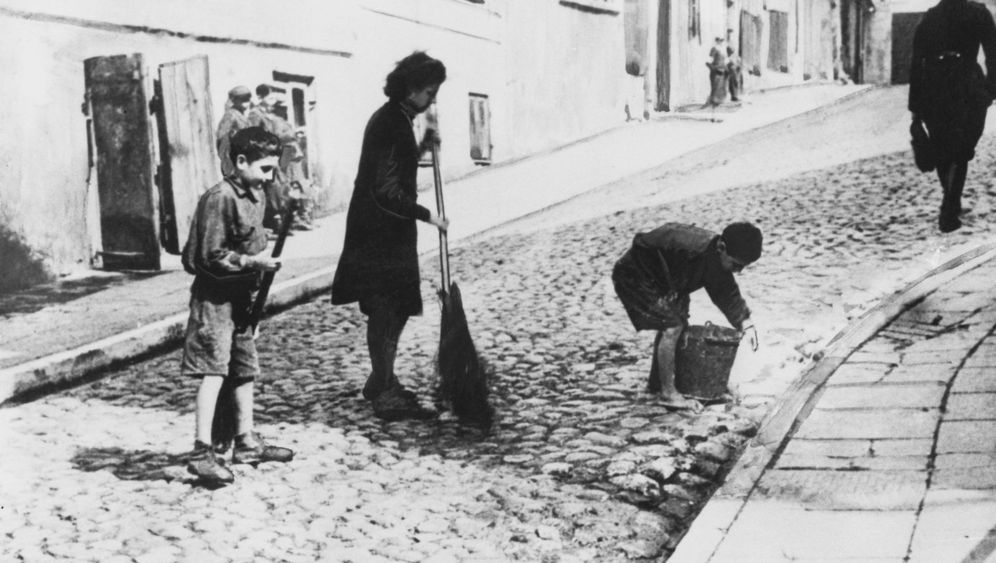 Elijahu Zicher was just nine years old when he started his first job. The Nazis had marched into Poland, killing his mother and older sister and forcing the rest of the family into the ghetto in the city of Wlodowa in eastern Poland, where the young Jewish boy found work in the ghetto's sewers. Relative to the overall situation, conditions were fairly good. Zicher wasn't kept under guard as he worked, and even received modest pay.

Tens of thousands of Jews living in ghettos under the Nazi regime had similar experiences, working more or less normal jobs. Some of these ghettos had their own employment centers, and some of the German employers even paid into retirement funds. Survivors such as Zicher don't fall under the category of forced laborers, so an additional law passed in 2002 by the German parliament, or Bundestag, granted them the right to draw a German pension.

On paper at least. In practice, things have looked a bit different. Since 2002, around 70,000 survivors have invoked this law, known as "German Pensions for Work in Ghettos," or by its German acronym ZRBG, but over 90 percent of these applications were initially rejected, with German authorities opting for an exceedingly strict interpretation of the law.

State insurance providers often disputed that former ghetto residents had worked voluntarily and received some form of "remuneration" for their work, two conditions stipulated by the ZRBG. The insurers alleged in many cases that these survivors had claimed to German authorities in the 1950s that they had been forced laborers, and then later changed their story so that they could also receive "ghetto pension." In reality, of course, many Jews suffered through both: the ghetto and then later forced labor -- as did Elijahu Zicher. The survivors have taken these cases to court, but in most cases the German judiciary has decided in favor of the pension fund.

Zicher, too, filed his application in 2002, as required in order to receive the full pension, retroactive to 1997, due to him according to the law. The pension fund refused his claim. Zicher, now an Israeli citizen, took the case to court -- and lost. On April 30, 2009, Germany's Federal Social Court ruled that no further appeals would be allowed.

Resistance from the Finance Ministry

Now, internal files show it is not only the courts that have been tight-fisted -- the federal government has as well. Particularly the Labor Ministry, which oversees this matter, has played an unappealing role, with its primary concern being not to further burden those currently paying into the system. The Finance Ministry, meanwhile, refused to fund compensation to the ghetto workers out of the federal budget. "The most cost-effective option was chosen, because anything else didn't seem feasible given the resistance from the Finance Ministry," concludes Stephan Lehnstaedt at the German Historical Institute Warsaw, who has studied the files. "Those involved in the decision clearly knew nothing about the historical conditions," he writes in an article that has not yet been published.

This was evident in the deliberations surrounding the ghetto pension law. After the Federal Social Court ruled in 1997 that work performed in ghettos must be recognized as employment time under the terms of Germany's pension laws, Berlin authorities set about determining how many potential applicants they could expect. Internal correspondence reveals that the Labor Ministry anticipated at most 3,000 applicants, and in correspondence with members of the parliamentary budget committee, even put the number at just 700 -- an embarrassing miscalculation given the fact, known even then, that the Nazis had established over 400 Jewish ghettos throughout the territories they occupied during World War II. The Warsaw Ghetto alone had a population of around half a million in 1941.

The German government was also stingy from the start when it came to setting the amount for these pension payments. "A 'major solution' is not feasible given the current financial situation of the pension fund," the country's pension department wrote in May 2001 to Walter Riester, the Social Democratic labor minister at the time. Even the solution presented as "financially manageable" met with resistance, with the Labor Ministry taking the position that it would not be possible to fund pensions for former ghetto workers only from the contributions paid by current employees. Rather, suggested an early draft of a law on the subject, this was a "duty of society as a whole," the cost of which should be reimbursed by the federal government. But the Finance Ministry refused to comply.

Ultimately, the law was formulated in a way that made it exceedingly difficult to actually file a claim. Anyone applying for the pension had to have been "forced" to live in a ghetto on the one hand, but on the other hand have taken up work there "by their own free will." This clear contradiction allowed the pension fund to take a restrictive approach.

Officials designed complicated questionnaires, within which many applicants became bogged down. Recently the Federal Anti-Discrimination Agency even stepped in to require that the application forms be reevaluated. "Some of the questions included in the pension application could, in our opinion, unreasonably impede claims by those entitled to pensions," the agency wrote in an April 19, 2012 letter.

The Labor Ministry, which is ultimately responsible for the matter, has long been unconcerned by the criticism. In 2006, Foreign Minister Frank-Walter Steinmeier brought up the possibility of a change to the law while on a visit Jerusalem, but the Labor Ministry put on the brakes. The victims wouldn't be satisfied until 90 percent of claims were granted, internal experts wrote to top ministry officials on February 24, 2006. That would mean back payments of around €2.5 billion ($3.3 billion), as well as monthly pensions adding up to around €270 million, these officials warned. "Because it was short on pension funding, the Labor Ministry decided to play for time," Lehnstaedt at the German Historical Institute Warsaw believes.

Berlin, meanwhile, lays the blame for the low application approval rate in part on the survivors themselves, writing in a response to a June 26, 2006, inquiry from the Left Party's parliamentary group that the high number of rejected applications was partly due to "the applicants' lack of knowledge concerning this complicated legal situation, which is difficult to understand at first glance."

The government has also shot down various initiatives from social court judges in the state of North Rhine-Westphalia, for example, or from parliamentarians in Berlin. Lawmakers already "pushed the limits of what is possible within the statutory pension system" in 2002, the Labor Ministry wrote to the state Social Services Ministry in North Rhine-Westphalia in October 2008, adding that "the federal government has expressed multiple times that no amendment to the ZRBG is planned."

Change didn't come about until two Federal Social Court rulings in June 2009 revisited the existing law and eased access to pensions. With astonishing speed, in the space of about a week, officials in Berlin calculated the burden this ruling would put on the country's pension fund. "Based on rough estimates, we must expect that this will mean one-time back payments of two to three billion euros from the pension fund, as well as annual expenses of up to €200 million," reads their report for then-Labor Minister Olaf Scholz (SPD).

Appealing to the High Court

This conflicted with Angela Merkel's promise to reduce pension fund premiums, so the Labor Ministry wanted the additional costs funded by taxes. But this too came to nothing.

For most of the applicants who had previously been turned down, the Federal Social Court's ruling seemed like good news at first, and they resubmitted their applications. This time around, Elijahu Zicher in Israel was granted a pension, but one that is retroactively for only four years, not back to 1997 as the law on ghetto workers' pensions stipulates. Here, the German pension fund had invoked a passage in German social law stating that remuneration for an erroneous ruling is only paid retroactively for a maximum of four years, and the Federal Social Court ruled in the pension fund's favor this February.

Zicher's lawyer in Berlin, Simona Reppenhagen, has now filed an appeal with Germany's Constitutional Court, the country's highest legal body, and she selected a highly symbolic date on which to do so: May 8, the anniversary of the end of Nazi rule in Germany. Reppenhagen wants her appeal to increase pressure on the German government to finally find a solution.

But Berlin is resisting. An opposition proposal to change the law on ghetto workers' pensions has met with little support from the current government. Labor Minister Ursula von der Leyen of Chancellor Angela Merkel's Christian Democratic Union (CDU), a politician often highly involved in other social issues, hasn't shown interest in reaching a mutually satisfactory conclusion to what is likely the last chapter of Germany's reparation.

The Labor Ministry's rationale is that there has not yet been a conclusive ruling on the legal case with the former ghetto workers -- so there's no reason yet to take any action.