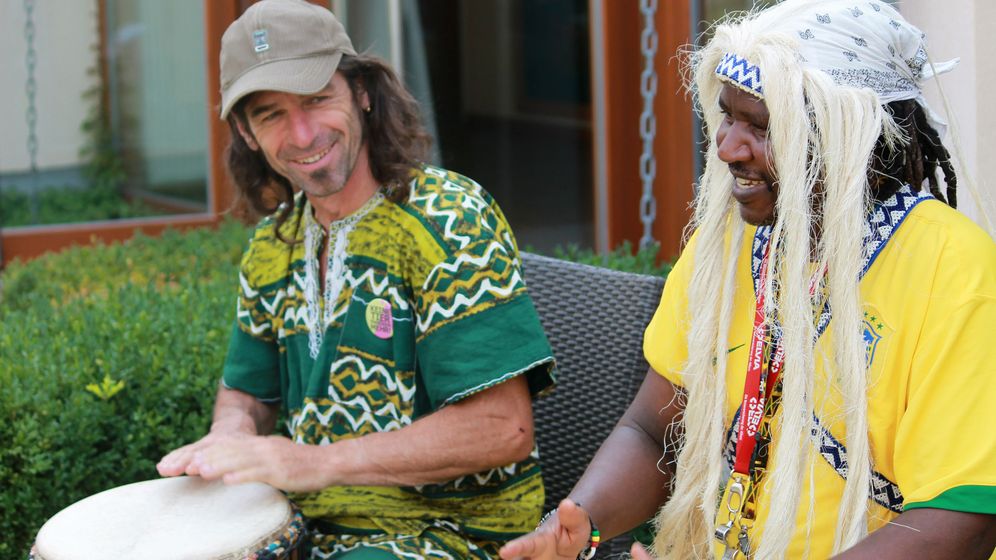 The Golf and Country Club Fleesensee in Germany's famous lake country offers an idyllic stretch of lush green fairways and glistening ponds. At first glance, it doesn't seem like an obvious frontline in the battle against right-wing extremism.

On Saturday, though, the site hosted 70 golfers from across Germany and Switzerland, who had gathered for the country's first "Golf gegen Rechts," or Golf against the Far-Right, tournament to remember past extremism and stop future acts in the northeastern German state of Mecklenburg-Western Pomerania.

Organizers held the fundraiser in commemoration of the 20th anniversary of a xenophobic attack that took place in the port city of Rostock in 1992 and generated headlines from reunified eastern Germany that shocked the world, coming as they did just a few years after the fall of the Berlin Wall. The tournament also served as a reminder that, two decades on, there remains an acute need to fight extremism in the region, organizers said. This became all the more apparent after it appeared the event itself had become the subject of a hate attack. Around 3:30 a.m. on the morning of the event, the organizers said that anonymous vandals had spraypainted the word "death" on signs advertising the tournament.

"This shows us that we're here for the right fight," said Detlev Fricke, the event's co-organizer and CEO of Fleesensee, which is located in the tiny municipality of Göhren-Lebbin and claims to be the largest golf club in Northern Europe.

"This is the first tournament, and we'll continue having one every year until extremism in this area isn't a problem anymore," he said.

In recent years, Germany's far-right National Democratic Party (NPD) has gained a strong foothold in Mecklenburg-Western Pomerania, a largely rural state with around 1.6 million residents where the unemployment rate hovers around 12.5 percent. Described by the German domestic intelligence agency as "a racist, anti-Semitic, revisionist" party striving to form a Fourth Reich, the NPD scored 6 percent of the total vote in Mecklenburg-Western Pomerania in state elections in September. In some towns, as many as 25 percent of voters cast ballots for the party.

Mecklenburg Western-Pomerania isn't the only state where the NPD has done well in elections. The party is also represented in the parliament of the eastern state of Saxony. Other parts of the former communist east have also seen a rise in far-right violence as immigrants became scapegoats for the region's economic decline following unification.

"It's important to have events like this in this community," said local Franka Stahl de Castrillon, who snagged first place in the women's division despite her limited golf experience. When traveling outside the region, she said the people she meets tend to associate Rostock, her hometown, with racist events of the past. It's high time, she said, to refurbish not only the city's image, but also that of the state.

Golfers each paid €100 to participate in the fundraising tournament, money that will be funneled directly to two local projects that seek to educate youth and eradicate extremism. At a dinner following the tournament -- whose participants included Patrick Döring, general secretary of the Free Democratic Party, which is the junior partner in conservative Chancellor Angela Merkel's government, and Göhren-Lebbin Mayor Peter Becher -- organizers handed the two non-profits a check for €7,500.

The event itself is part of a wave of new efforts in the state to combat right-wing extremism. In recent months, a local resident created a successful satirical campaign against the NPD and xenophobia in the region under the name Storch Heinar, a play on the Thor Steiner label of clothing that is popular with neo-Nazis. And, more recently, the mayor of a small city in the state generated headlines with his efforts to halt a major rally of neo-Nazis. The event went on in Pasewalk, attracting an estimated 1,000 NPD supporters, but the mayor managed to rally what one observer described as the "something approaching broad resistance" to the neo-Nazis. Although many came from other parts of Germany, an estimated 2,000 people gathered to form a human chain and protest the event, including a person dressed as Storch Heinar, which has since become the mascot of the mainstream anti-Nazi movement in the state. The stork even made an appearance at the golf tournament.

Mecklenburg-Western Pomerania, with its sandy beaches and picturesque coastline, has become a magnet for tourists in recent years -- from elsewhere in Germany and abroad. Residents appear to be growing aware of the fact that the strength of the far-right in the state could become a drag on this needed boost.

'A Dangerous Place To Be for Minorities'

The state has been on the international radar since August 1992. For several nights between Aug. 22-24, far-right thugs hurled stones and Molotov cocktails at a dormitory that had been home to Vietnamese and Roma asylum seekers. If the terror itself hadn't been enough to land the city in the international headlines, then the fact that hundreds, if not thousands, of locals stood by and cheered the violence on certainly had been. Xenophobic local residents by far outnumbered regional police, who struggled to quell the chaos.

Even today, parts of the state remain "a dangerous place to be for minorities," warned Professor Hajo Funke, a prominent analyst of the far right at Berlin's Free University. Funke said violence against ethnic minorities, who comprise only around 1 percent of the state's population, is widespread. He also accused officials of not doing enough to stop extremism.

Now it seems that locals like the golfers at Fleesensee are stepping up to fix the image problem. "We still have a problem here with the Nazis, especially in the areas of Mecklenburg located near the Polish border," said Peter Marx, the Mecklenburg-Western Pomerania correspondent for Germany's Deutschlandradio, a national public radio station. Marx himself conceived the idea for the tournament and organized the event.

His experiences alone are symbolic of the resistance that can be faced by people who go public with their opposition to far-right sentiment in the area. Marx said he received angry and sometimes threatening emails and calls from locals in the weeks leading up to the event. "Many people told me it was a crazy idea and that they hated it," he said. "They told me that there should be a tournament against the left and not the right."

Those hostilities seemed to be forgotten on the golf links on Saturday. As golfers toiled for five hours in the 32-degrees Celsius (almost 90 degrees Fahrenheit) heat, Amri Habimana played drums in a booth situated near the entrance to the club. Habimana emigrated to nearby Neubrandenburg in 1994 after fleeing the deadly unrest in Rwanda. Today, he is a musician with ProVie Theater, one of the two benefactors of the fundraising effort. As part of the program, he travels to schools in the region, where he shares African music and encourages students to play along with the instruments he has brought -- introducing them to multiculturalism along the way.

Habimana said that when he first arrived in Germany, people would often glare at him. Now, though, he says, "everybody knows who I am and things have gotten better."

"We have racist people here because they don't know anything about other cultures," said Habimana. "But after our performances, we often receive calls from parents or kids asking more questions about Africa."