In the process of formulating the German government's goals for the next two years, a conflict has erupted between Finance Minister Olaf Scholz of the Social Democrats (SPD) and Defense Minister Annegret Kramp-Karrenbauer, chair of Chancellor Angela Merkel's Christian Democrats (CDU).

DER SPIEGEL has learned that the finance minister insisted that an increase in the defense budget to 2 percent of gross domestic product, as NATO member states have pledged to do, not be anchored in the coalition government's midterm assessment. The discord between the two apparently grew so heated that the Chancellery had to step in.

The disagreement between the Finance and Defense Ministries began over a seemingly innocuous passage in the assessment pertaining to security policy and the financing of the Bundeswehr, Germany's military.

Kramp-Karrenbauer's ministry wanted the passage to reflect the German government's intention to fulfill the 2014 NATO resolution and to increase its defense budget in the coming years to 2 percent of GDP. U.S. President Donald Trump, in particular, has repeatedly chastised the Germans for not yet having fulfilled that pledge.

Scholz, though, intervened. His ministry considers an increase in defense funding to 2 percent of GDP to be rather unrealistic since it would mean boosting the budget from its current level of almost 50 billion euros to more than 65 billion euros.

Scholz had engaged in a similarly passionate dispute with Kramp-Karrenbauer's predecessor Ursula von der Leyen -- who left the portfolio to take up her current position as president of the European Commission -- over whether Berlin should continue promising NATO that it would fulfill the 2014 pledge. Scholz ultimately won that battle and Germany told the alliance that it would only increase defense spending to 1.5 percent of GDP by 2024.

Scholz, who has a rather tepid relationship with von der Leyen, has not forgotten the battle with her. Which is why his ministry insisted on rather nebulous language when it came to formulating the midterm assessment. Once the Chancellery became involved, Scholz got his way, and the passage pertaining to Germany's commitment to NATO's 2-percent pledge was removed in its entirety.

The final version merely contains a sentence whereby Berlin aspires, "within the limits of budgetary feasibility," to achieve the 1.5-percent goal by 2024 and intends to "further increase" the defense budget "thereafter."

For the defense minister, the clash is more than just a side note to the difficult negotiations over the midterm assessment. She is under considerably more pressure from NATO to finally deliver on the 2-percent pledge than any other member of the German government. Just recently, at a meeting of NATO defense ministers in Brussels, Secretary General Jens Stoltenberg warned behind closed doors that the gradual increase to the German defense budget isn't enough. Further steps are necessary, he said. Burden sharing among the allies, he warned, would be a top issue at the NATO summit in December.

Inside the Defense Ministry, some are surprised that Kramp-Karrenbauer buckled in the dispute over the extremely sensitive passage. Critics speculate that her team may not have been aware of the political importance of the passage and say that such a thing would not have happened under von der Leyen. There is widespread frustration, with many having hoped that Kramp-Karrenbauer would flex her political muscles as chair of the CDU when it comes to increasing the German defense budget.

The incident is the last thing that Kramp-Karrenbauer needs. She recently became the target of derision after she went public with a rather half-baked plan for a German military mission in northern Syria. After laying low for a few days, she made an appearance on Thursday at the Bundeswehr University Munich, where she held a keynote address on security policy. In her speech, Kramp-Karrenbauer repeated her demand that Germany take on more responsibility in the world.

She also stayed true to her line on the defense budget, and even offered a concrete timeline. When it comes to defense funding, she said, Germany "needs an increase to 1.5 percent by 2024 and to 2 percent by 2031." Her goal, she said, is "well planned out and I am committed to it."

In her comments on the German pledge to NATO, Kramp-Karrenbauer sounded almost admonishing, saying it was important to fulfill that pledge even if "some people" didn't want to spend so much on the Bundeswehr. "For me, 'Made in Germany' has always carried the additional meaning that German promises can be depended on internationally," the defense minister said.

The U.S., in particular, will be keeping a close eye on the conflict over the NATO passages in the midterm assessment. U.S. Secretary of State Mike Pompeo arrived in Germany on Thursday and, like his boss Donald Trump, he has repeatedly gone after Germany due to what the U.S. sees as unfair burden sharing at NATO.

One can assume that when Pompeo meets with Kramp-Karrenbauer on Friday, he will ask why Germany's governing coalition isn't even able to anchor the 2-percent pledge its own government program. 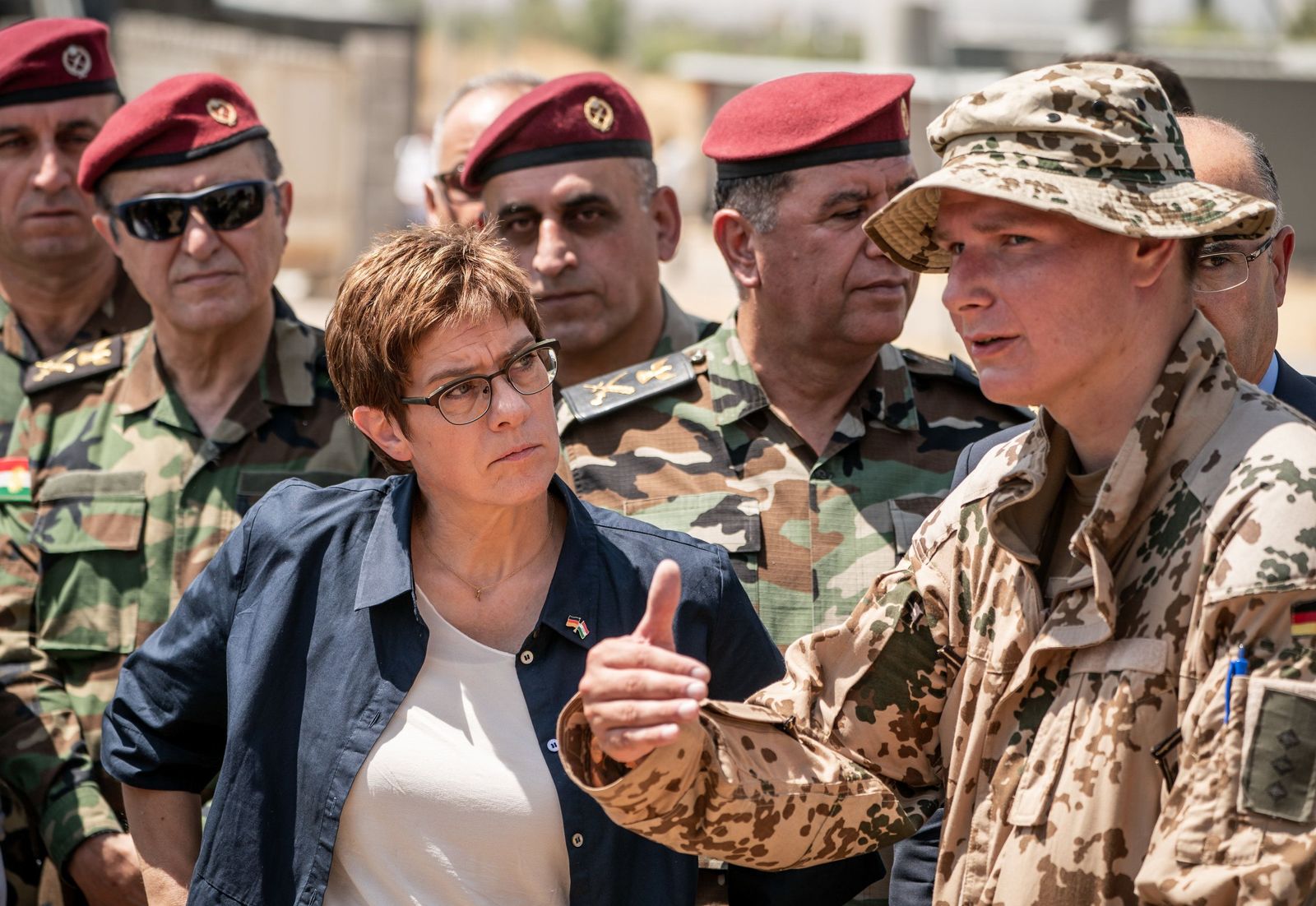