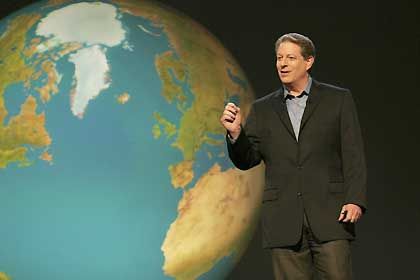 The German government has given its blessing for schools to continue screening Al Gore's "An Inconvenient Truth."

Al Gore may have had a setback in a British high court this week, but following the announcement Friday that the former United States vice president had been named as the recipient of the Nobel Peace Prize, German Environment Minister Sigmar Gabriel defended the use of the Oscar-winning climate change film "An Inconvenient Truth" in classrooms.

Gabriel praised Gore's film for presenting the dangers of climate change in an accessible way. Earlier this year, the Environment Ministry distributed 6,000 copies of the DVD of the documentary film to German schools.

Last week, a British high court ruled that Gore's film could only be screened in classrooms with a warning message that the documentary contains nine factual errors. Scientists have criticized a chart in the film that shows the correllation between carbon dioxide concentrations in the atmosphere and global temperatures over the past 650,000 years. Gore's conclusion that a higher concentration of CO2 will also trigger a rise in temperatures is incorrect, his critics maintain. At the end of the last ice ages, for example, temperature rises were not caused by increases in CO2 levels. In the film, Gore said the chart demonstrated an "exact fit" showing that rising CO2 leads to rising temperatures. The judge said that while there may be general scientific agreement that there is a connection, "the two graphs do not establish what Mr. Gore asserts."

Nevertheless, the German government said it sees no reason to include any warning message when screening the documentary in classrooms. "A couple of errors in detail are no reason to disparage an entire film," an Environment Ministry source said. "We assume that teachers will encourage their students to view (the film) with a critical eye."

Gore is planning to make his next appearance in Germany at the end of October, when he is scheduled to speak at a climate conference organized by the Baden-Württemburg based ultility company EnBW, which is paying the Oscar and Emmy award winner €180,000 ($255,000) for his appearance. A similar Gore climate change event was planned for Hamburg, but it's organizers cancelled without providing any reason.