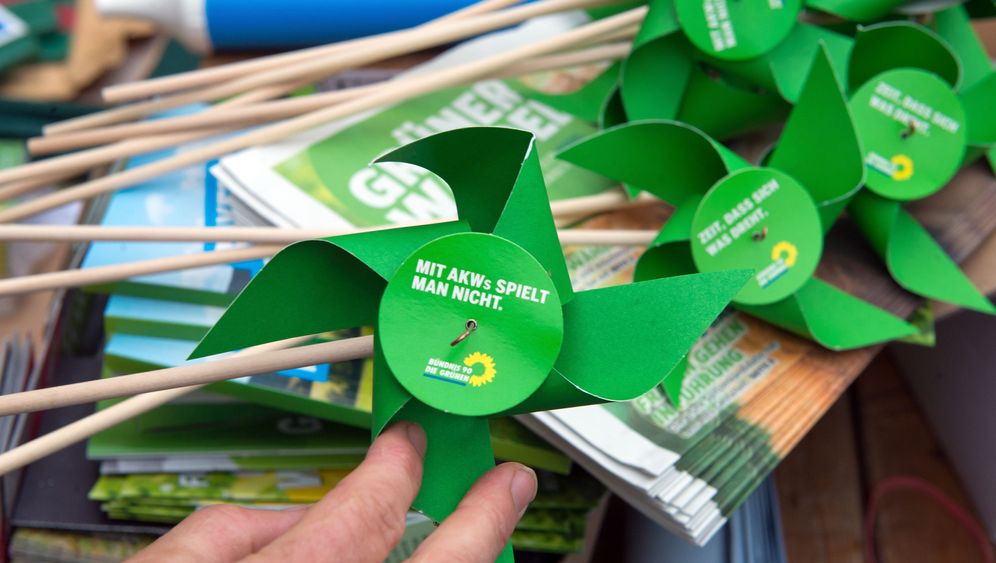 Photo Gallery: The Greens Fall Back to Earth

It was an astounding result. In April of 2011, a political survey found that fully 28 percent of German voters supported the Green Party, well more than the center-left Social Democrats. Immediately, pundits began writing about a new Volkspartei, that uniquely German term which implies a big-tent, yet cosily familiar, political party.

But there was one problem. Elections were still more than two-and-a-half years away. And now, with the vote two-and-a-half weeks away, the picture is not nearly as rosy. A poll released Thursday found that just 10 percent of Germans intend to vote for the Greens on Sept. 22. It is the lowest survey result for the once popular party since way back in 2009.

So what happened? Party leaders such as Jürgen Trittin have tried to shrug away the poll numbers. "I would advise waiting serenely for what happens on Sept. 22," he said on Thursday.

But the newest survey is not an outlier. The Greens have been consistently bleeding support ever since the spring of 2011. Along the way, they have achieved a few notable successes in state elections, but the trend has been a downward one for over two years. It is as if the German electorate has suddenly decided that the party is no longer needed.

Political pundits, of course, won't go quite that far, but they do point to the fact that many core Green issues have become mainstream in recent years. And much of that is thanks to Chancellor Angela Merkel and her Christian Democrats (CDU). She has proven expert at borrowing political demands from other parties and then taking the credit for implementing them. When it comes to policy areas near and dear to the Green heart, the list is long: pacifism, the nuclear energy phase-out, gender equality and expanded childcare. On every single one of those issues, Merkel's administration has made strides.

"The Greens are worried," says Ulrich Eith, director of the Baden-Württemberg Institute for Political Education. "It is certainly nice for them that progress has been made on their issues, but it was the CDU that made it happen. All they can now say is, 'but we are the original.'"

Merkel's political opportunism, however, is only one part of the equation. Recent history is equally important. The peak of the Greens' survey powers came just weeks after the massive tsunami struck the east coast of Japan on March 11, 2011, leading to the Fukushima nuclear disaster. Given that the Green Party emerged from the anti-atomic energy movement in the 1980s, it is hardly surprising that Germans' deep fear of unchecked nuclear radiation manifested itself in a burst of support for the environmental party.

Furthermore, Merkel's government was floundering badly at the time, seemingly more interested in bickering than leading. Many voters, says Eith, were searching for a place to register their protest. Supporting the Greens seemed just the thing.

"The competition was terrible," notes Gero Neugebauer, a political scientist at the Free University in Berlin. "The SPD was terrible and the Left Party, my God! That helped the Greens."

The party was able to capitalize on its popularity too. On March 27, the Greens scored 24.2 percent in a state vote in Baden-Württemberg, beating out even the Social Democrats. That state now has a Green governor, Germany's first ever.

But did they draw the wrong conclusions? Even as Merkel's government spent the last two years systematically implementing some of the Greens' central demands -- beginning, most spectacularly, with the decision taken in early June of 2011 to phase out nuclear energy by the beginning of next decade -- the Greens seemed to begin preparing for a future as Germany's third large political party. Certainly in the run-up to this year's election, the Green Party tried its hand at policy proposals far outside of its normal sweet spot.

Its success has been modest. One of the party's central proposals in the current campaign, for example, has been that of raising taxes on high earners and introducing a 1.5 percent tax on assets of over €1 million as a way of increasing social justice. To be sure, many of the party's core voters support such a proposal, despite being in the upper tax brackets themselves. But it seems poorly designed should the Greens be interested in getting their new supporters to actually cast a ballot for the party on Sept. 22. Other proposals have likewise fared poorly.

"I think the Greens share some guilt (for their lower poll numbers)," says Neugebauer. "Their efforts to gain competence in other fields have distracted attention from their own key issues. It has diluted them significantly."

In addition, the Greens lack a campaigner of the caliber of Joschka Fischer, the party's widely respected éminence grise who served as Germany's foreign minister in the government of Gerhard Schröder from 1998 to 2005. The current top pairing of Trittin and Katrin Göring-Eckardt has failed to generate much excitement, both of them having been part of the party leadership for years. Trittin, for his part, has managed to do little more than deliver the perfect symbolic photo for the party's recent troubles by capsizing in a canoe during a July campaign event.

Most of all, though, it could be that the Greens' return to earth is simply a function of the election cycle. It is often the case that governing parties lose support during the term, only for voters to return as the next election nears. For opposition parties, the opposite is true.

And in this election season, notes Eith, controversy is largely absent. "The differences between the parties are not fundamental at the moment," he says. Nobody wants to send soldiers abroad. Nobody wants to go to Syria. Nobody wants to make significant changes to our economy. No party, except for the Alternative for Germany, wants to get rid of the euro. There is a large consensus."

Such an atmosphere, he adds, provides voters with little incentive to change parties from the last time around.

Neugebauer agrees. "The anger is gone," he says. "At a time when people look around and see things going well, they tend to go back to the big parties."