When Andreas Kalbitz was elected to represent the right-wing Alternative for Germany (AfD) party in Brandenburg state parliament, he immediately signed a membership application for the "German Parliamentary Society." The venerable club, founded in 1951, is located right next to the Reichstag building in Berlin and is open to all state and federal representatives. Kalbitz enjoys eating lunch in the "PG's" restaurant, where waiters in white livery know that he likes his white wine with extra ice cubes. Sometimes Kalbitz will retire to one of the club's plush salons for private conversations or spend his evenings at the bar in the basement. "Here is a refined parliamentary culture in the style of British clubs," raves Kalbitz, a former paratrooper.

But if you believe Germany's domestic intelligence agency, the Federal Office for the Protection of the Constitution (BfV), Kalbitz has no business belonging to a club that, in its own words, strives to promote a culture of "parliamentary collegiality." Kalbitz is suspected of posing a threat to the country's liberal democratic constitution. Just a few days ago, the BfV announced it was looking into initiating surveillance of the party's youth organization, the "Young Alternative." Meanwhile, the agency views the party's ultra-conservative faction, known as "The Wing," with an even greater degree of suspicion.

DER SPIEGEL has obtained a BfV report of more than 400 pages in which the agency does not condemnthe AfD as a whole. But its focus on "The Wing" and its leader, Björn Höcke, is a tough blow to the far-right camp. The BfV closely analyzed the "ethno-nationalist ideology" of Höcke, Kalbitz and their like-minded colleagues. The report also makes clear that the intelligence service has run out of patience with AfD leaders Jörg Meuthen and Alexander Gauland's strategy of shirking responsible for the radicals in their party.

Kalbitz himself is a master of ambiguous communication. When he's not out in the marketplaces and taverns, instead finding himself in more dignified surroundings like the parliamentary society, the 46-year-old's tone is much milder. He recently offered a bottle of Crémant to anyone who could find even a single instance of hate speech against Muslims in any of his press releases. He doesn't seem terribly perturbed by the fact that his power base has fallen into the intelligence service's crosshairs. "OK, so I won't be able to live out my subversion fantasies on the phone anymore," he jokes.

At the lectern, however, Kalbitz knows exactly how to rile up his audience. The BfV has put him in the same ideological camp as Höcke, both of whom call for Muslims and refugees to be stripped of their legal rights. Kalbitz has only malice and contempt for his political opponents and has suggested civil war may be unavoidable.

For a long time, the AfD's "Wing" faction was able to avoid the intelligence agency's scrutiny. The BfV's former head, Hans-Georg Maassen, was considered within the party to be a secret supporter of the AfD and the party's moderate wing, the "Alternative Middle," remained weak and marginalized. "The Wing" acts strategically, renouncing any fixed organizational structures and theoretically accepting anyone who signs the founding manifesto. So far, some 3,000 people have done so. But: "A membership in the traditional sense is not possible," the faction says.

"The Wing" also has no formal leadership structure, not even a designated head. Yet everyone within the AfD still knows who calls the shots within the faction: Höcke and Kalbitz. "Don't picture something rigid or bureaucratic," Kalbitz says. "Affiliation is based on commitment." Depending on what's needed at the time, they seek out the necessary actors. Often the goal isn't to get their own people elected, but to "slow down or correct" certain positions or people whose views don't correspond to those of "The Wing."

The intelligence agency has made clear that the precautionary measures haven't helped. "The Wing" is "a majority of people who pursue a common purpose" -- that's sufficient to put the faction under observation. It's a potentially dangerous development for Höcke and Kalbitz, the party's respective leaders in the German states of Thuringia and Brandenburg. Kalbitz notes contentedly that he hasn't come under open attack from anyone within the AfD, but the party does have many civil servants in its ranks. Official observation of a group within the party they belong to could have serious occupational consequences.

The BfV has evaluated all of the statements made by alleged "Wing" followers, especially those made at the right-wingers' annual "Kyffhäuser summit," named for the low mountain range nearby. The ideology of Höcke, Kalbitz and other speakers is antithetical to human dignity and the rule of law, the BfV's report found. The AfD members are "unwilling to accept democratic decisions that contradict their ideology," the report states, adding that the party views other parties as "more than simply an opponent with a different opinion, but part of a despicable system that must be renewed from the ground up."

According to the far-right faction's worldview, the German folk is everything while the individual is nothing. Non-Germans are, for Höcke, "foreign bodies" for whom integration is impossible and who must, therefore, be ostracized. When Höcke talks about his idea of "re-migration" of foreigners, it is but a "thinly veiled demand for the arbitrary revocations of citizenship and indiscriminate mass deportations," according to the report.

Höcke's name appears hundreds of times in the report, more than any other. Officials carefully analyzed his speeches as well as his book, and they also looked at statements he made before his involvement with the AfD. They believe the research of the sociologist Andreas Kremper, who collected evidence that Höcke had written for the right-wing extremist National Democratic Party of Germany (NPD) before joining the AfD. The report's authors said it was "almost undeniable" that Höcke was the same person as the NPD author "Landolf Ladig." Höcke's diction "has linguistic and argumentative similarities with well-known interpretive patterns" of the NPD, such as when he warns of the impending death of the German people.

The officials noted that Höcke's partner Kalbitz expresses himself much more carefully, but they said that his sometimes-ambiguous statements must be seen in the context of Höcke's speeches.

For years, Kalbitz has successfully managed to avoid any real scrutiny. He ascended through his party's ranks and eventually became the floor leader and chairman of the AfD's state chapter in Brandenburg despite a reputation for moving in far-right circles. The BfV's report lists some of Kalbitz's stations in life, from his association with the national-conservative Republicans in the '90s -- back when that party was under observation by Germany's domestic spy service -- to the right-wing extremist organizations Kalbitz spent time around, including the "Witikobund," the "Junge Landsmannschaft Ostpreussen" and the "Heimattreue Deutsche Jugend."

The latter organization sought to indoctrinate children in imitation of the Hitler Youth and is now banned. Kalbitz once visited a tent camp the organization had set up and today sys it is "rather cheap" for journalists to bring it up. He claims to have been invited to come along on a visit to the camp, but he can allegedly no longer remember who issued the invitation or why. As to why he accepted the invitation, he says AfD voters "aren't interested" in such questions.

The BfV's report, which includes 1,000 pages of source material, includes an endless list of taboo violations. The sober bureaucratic language in which the report was composed is in stark contrast with the quotations about "foreign peoples," the "audacity of economic migrants" or "birth jihad." BfV officials have identified similar language across all levels of the AfD -- but these are merely "splinters of suspicion," they say, not "sufficiently hardened" for an observation of the entire party and the "deployment of intelligence resources."

The BfV officials hold the AfD's leadership, particularly the co-heads Meuthen and Gauland, partly responsible for "The Wing." The report argues, for instance, that neither man has demonstrated "a clear distancing or rejection" of the right-wing extremist identitarian movement. The intelligence officials also noted "that the AfD's federal leaders, who answer for the entire party ... have in no way distanced themselves from the aggressive diction of the 'Wing' protagonists." On the contrary, the reported states: At "The Wing" events, the AfD's leaders often use the same terminology and manner of speaking as those on the far-right.

Meuthen, an economics professor, tries to curate a "moderate, integrative image for himself in the media," the report says, though it adds that at the Kyffhäuser summit he uses "aggressive xenophobic rhetoric." With Gauland, the AfD's parliamentary floor leader in the Bundestag, the BfV agency noted only an "ethno-nationalist view of society."

In the future, the AfD's leaders will have a harder time dismissing Höcke as an insignificant regional player. From now on, the BfV will register how the party's high functionaries react to his outbursts, with the report citing Höcke's call last September to join demonstrations in the eastern German city of Chemnitz, which was the site of a weekend of ugly race riots. Intelligence officials said the city became host to an "extremist-friendly mix" of normal citizens, neo-Nazis and hooligans.

Despite the report's findings, the BfV agency's interventions against the AfD likely won't be terribly disruptive. While it's true that intelligence officials could use covert surveillance to monitor "The Wing" and the "Junge Alternative" more closely, the methods used would have to be proportionate. That means eavesdropping on phone calls is pretty much out of the question. To do that, the "G10 Commission" in the Bundestag would have to get involved, but that step is generally only taken against Islamist terror suspects or violent right-wing or left-wing extremists. It's also unlikely that the BfV would be permitted to use informants, according to officials. At most, the agency could install observation teams and save person-specific information in the data network shared by Germany's federal and state-level intelligence services.

All the same, Kalbitz said the AfD was still exploring legal action. "I'm used to being maliciously misunderstood. But it's new that a federal agency is doing it," he says. Take one of Kalbitz's despicable quotes, for instance, about what a failure of the AfD would mean for Germany. In 2017, he told a group of "Wing" adherents: "All that would be left would be to say: 'Helmets on!'" The BfV agency, he complains, didn't bother to mention what he said next: "But I don't want that." 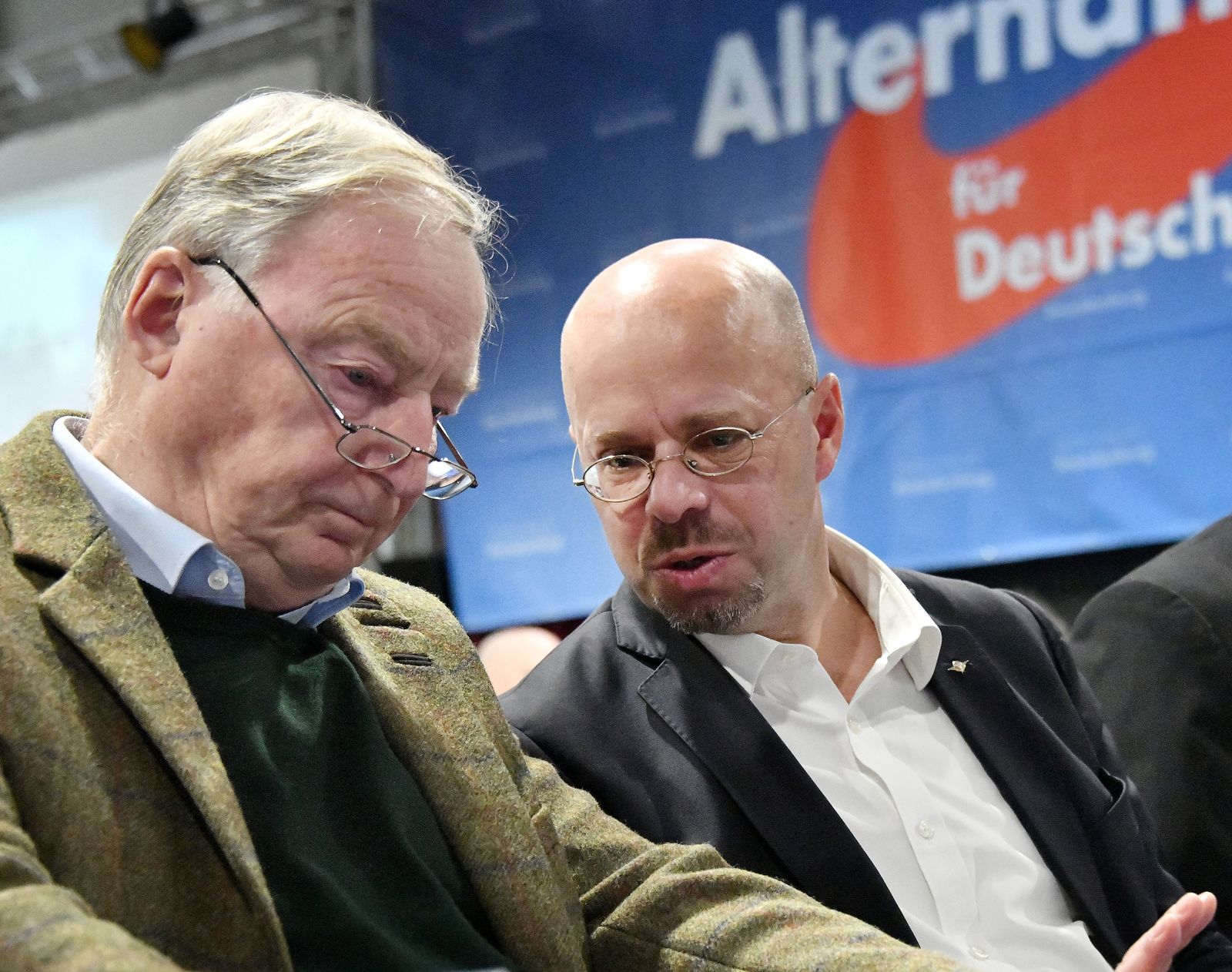