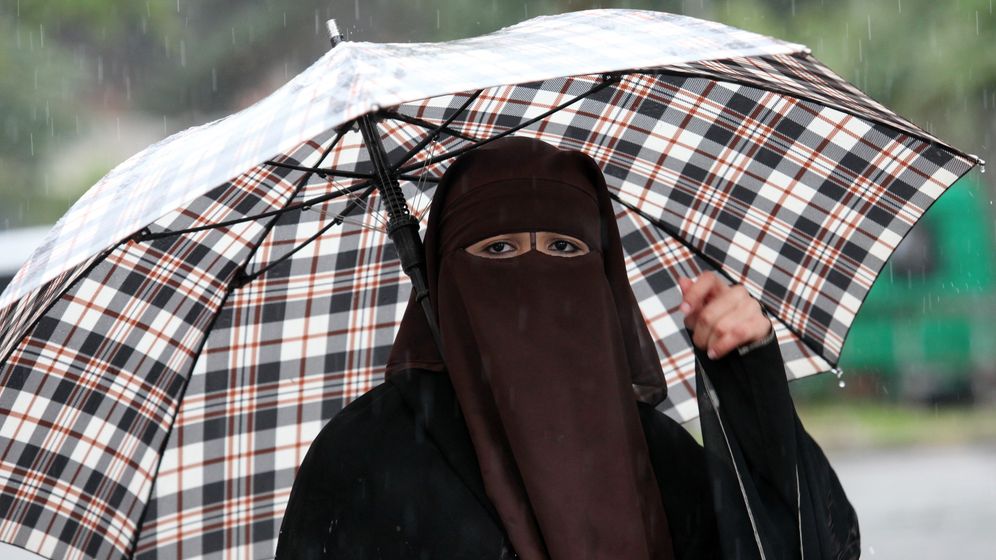 SPIEGEL: Minister Friedrich, the massacre in Norway has sparked a discussion about the political background to the attacks. Is Anders Breivik a madman or the first anti-Muslim terrorist?

Friedrich: He is a madman, but he's also more than that. I'm not talking about insanity in a medical sense. This sort of a crime, where someone shoots children in cold blood as they desperately beg for their lives, is incomprehensible for any person with normal emotions. But other factors must also have entered into the equation, factors that made this crime possible in the first place. Investigators are now trying to determine what they are.

SPIEGEL: Is this sort of an attack possible in Germany?

Friedrich: We are increasingly concerned about radicalized perpetrators acting alone. The deadly shots at American soldiers at the Frankfurt airport were also fired by a lone perpetrator, in that case an Islamist, who had become radicalized on the Internet. We have more and more people who isolate themselves from their social environment and immerse themselves into an online world. It changes them, usually in ways that no one notices. This constitutes a serious threat, also in Germany.

SPIEGEL: Have politicians paid too little attention to the extremist anti-Islamic scene that has developed in Europe in recent years?

Friedrich: There are always defensive reactions against what we perceive to be foreign. We have to incorporate these defensive reflexes into a rational discussion process through prevention and education. In Germany, so far, we have been relatively successful at this. We are a cosmopolitan and open country.

SPIEGEL: And yet there is also a growing movement in Germany that inveighs against Islam, especially on the Internet, and warns against the supposed threat of foreign infiltration. Breivik is apparently not alone with his ideas.

Friedrich: It's a long way from the crude political theories that certain Islamophobic blogs disseminate on the Internet to the mass murder Breivik committed. But you are, of course, right: There are certain political views in this scene that we find shocking, because they are unconsidered and full of prejudices. But we also have to realize that the abuse of Islam by Islamist extremists has contributed to this.

SPIEGEL: Anders Breivik claims to have acted in the name of Christendom. In doing so, is he misusing Christianity in a way that's similar to how Osama bin Laden misused Islam?

Friedrich: Someone who disregards individuals' life and limb, and their dignity as human beings, cannot invoke Christianity.

SPIEGEL: Did politicians like Geert Wilders in the Netherlands, or bloggers like "Fjordman," who Breivik often quoted and whose identity has since been revealed, pave the way for this killer?

Friedrich: Nowadays politically motivated perpetrators like Breivik can find all kinds of radical, unsophisticated theories, especially on the Internet. They can maneuver from blog to blog, spending all their time in this intellectual soup. At some point they manage to combine it all into a cohesive worldview. But this tells us that the Internet creates completely new challenges. The principles of our legal system must also apply on the web. In democratic conflict, we argue openly on the basis of our constitutional rules of behavior. Why should this be different on the Internet? I know that I will be severely berated in the online community for this, but why don't Fjordman and other anonymous bloggers need to disclose their true identity? Normally people use their names when they take a position. Why shouldn't this be something that is also self-evident on the Internet?

SPIEGEL: Where is the boundary between legitimate discourse and racist or right-wing extremist agitation?

Friedrich: The boundary is set by our constitution. There can be no justification for violating the dignity of other human beings, irrespective of whether it has to do with a political or a religious view. That is the underlying consensus of our constitutional state.

SPIEGEL: Do you feel that this boundary was crossed in the debate over the ideas of Thilo Sarrazin, the German politician and banker who criticized Islam in a best-selling book?

Friedrich: The Sarrazin debate showed that when it comes to Islam, there is a certain mood and need for discussion that is reflected in neither the public discussion in the media nor in politics. We did not take this sufficiently into account in the past, which is why this debate became necessary. We cannot allow something to smolder underneath the public discussion, so that there are people we can no longer reach in the end. We have to talk about issues like the ones that were discussed in the Sarrazin debate, even if it clashes with notions of political correctness.

SPIEGEL: In other words, Sarrazin did not radicalize the debate in an objectionable way, but was in fact a necessary outlet for public opinion?

Friedrich: Sarrazin did radicalize things, but he was merely an indicator that, when it came to the subject of Islam, something was festering that had escaped our notice. It's a discussion we need to have.

SPIEGEL: Sarrazin pushes the boundaries with his racist clichés. In this debate, there is a lack of a clear boundary between serious arguments and unacceptable polemic.

Friedrich: In our country, anyone who respects freedom of opinion and freedom of religion can discuss his views openly. The important thing is that Thilo Sarrazin addressed a subject that many people care about. Of course, there are many examples of extremely successful integration, but we also have ghettoization and a lack of integration. I don't want to get involved in the details of the interpretation of Sarrazin's theories.

SPIEGEL: In the wake of the attacks, Norwegian Prime Minister Jens Stoltenberg is calling for more decorum in the debate. Does this also apply to Germany?

Friedrich: In many European countries, like the Netherlands and France, we now have some very radical views clashing in the political debate. I'm happy that in Germany we have a culture of discussion that has not descended into this radicalism.

SPIEGEL: Can you explain why there isn't a party like Norway's Progress Party or a politician like Geert Wilders in the German Bundestag?

'We Must Continue to Promote Tolerance'

Friedrich: We have succeeded in refuting xenophobic theories, and as a result there is no room for such parties in Germany. Out of an awareness of German history, the country's political parties have made an effort to cover the entire democratic spectrum. As far as my own party, the Christian Social Union, is concerned, (former Chairman) Franz Josef Strauss summed it up by saying that there could be no democratic party to the right of the CSU.

SPIEGEL: On your first day in office as German interior minister, you famously said that the idea that Islam is part of Germany is something "that cannot be proved by history." Would you say this again, after Oslo?

Friedrich: Oh, come on, those two things have nothing to do with each other! I was talking about the issue of Germany's identity. This identity is shaped by Christianity and the Enlightenment, not by Islam. I don't have to qualify that.

SPIEGEL: After that, the New York Times wrote in an editorial that you had "gotten off to a disturbing, loathsome start." It's hard to imagine how German Muslims could regard you as a minister who also represents their interests.

Friedrich: The first thing I said at the time was that of course the Muslims who live in Germany are part of our society, but many ignored those words, because they don't fit into the picture they wanted to paint of me.

SPIEGEL: You have called for an interdenominational dialogue. Did the attacks destroy this dialogue?

Friedrich: Not at all. We must continue to promote tolerance and conduct a dialogue that does justice to everyone, not just the minority coming to our country, but also the majority that already lives here.

SPIEGEL: Let's move on to the controversial sale of German tanks to Saudi Arabia. As a member of Germany's Federal Security Council, a top-level government committee for defense issues, you voted to approve the sale of Leopard tanks to the country. Why?

Friedrich: You know perfectly well that I can't talk about that. Votes in the Federal Security Council are secret.

SPIEGEL: Referring to countries like Saudi Arabia, the federal government's guidelines state: "The export of weapons will not be approved unless, in an individual case, special foreign policy or security policy interests (…) support approval, which should only be granted in exceptional cases." Does Saudi Arabia's role in the Gulf justify this exception?

Friedrich: The Saudis are a stabilizing factor in an extremely unstable region, and one that we should not underestimate. The dialogue with the government in Riyadh is important to us, because it's the only way we can exert influence. We are pleased that we have this kind of a partner on the Gulf, with whom we can, for example, talk about fighting international terrorism and who assists us.

SPIEGEL: Doesn't it trouble you to be providing arms to a government that is miles away from Western notions of democracy?

Friedrich: We are not providing arms to a government. We are supporting the Saudi border police in the training of their officers. We are showing them how to secure borders.

SPIEGEL: Do tanks, which can be used against protesters, also promote democracy?

Friedrich: You don't give up, do you?

SPIEGEL: We think that in a democracy it would be appropriate for the government to inform the public about where it intends to sell weapons.

Friedrich: Do you even know whether such a delivery took place?

SPIEGEL: The public knows, thanks to a story in SPIEGEL, that there was an inquiry by the Saudis, and that the Federal Security Council responded positively to it. And we have all seen the images of Saudi tanks that recently rolled into Bahrain to help quell the protests there.

Friedrich: You're welcome to ask me again when the government decides that what happens in the Federal Security Council is no longer classified as secret.

SPIEGEL: Heidemarie Wieczorek-Zeul, the former development minister, has criticized the deal, calling it "a catastrophic decision" that will support a despotic system.

Friedrich: Ms. Wieczorek-Zeul was a member of the red-green (Social Democratic Party/Green Party) administration (under former Chancellor Gerhard Schröder). She ought to get a list of the countries that her government exported weapons to. They weren't exactly selling them fishing tackle either.

SPIEGEL: We would at least like to know whether you personally found it difficult to make a decision of such importance.

Friedrich: (long pause) As a politician, one faces decisions that are easy to make and those that are more challenging, because you have to justify them to yourself in a particular way. Don't ask me which decisions fall into which category.

SPIEGEL: In the media, you are sometimes described as a liberal conservative and sometimes as a hardliner. How do you see your role?

Friedrich: Even since I got into politics, there have always been some journalists who were surprised that I don't fit into their clichés. What you are addressing is not a question of content but of political style.

SPIEGEL: In your party and its sister party, the Christian Democratic Union, the office of interior minister has usually been associated with a blustering style designed to appeal to conservative voters.

Friedrich: I disagree. You don't always need to make a lot of noise to take a clear stance.

SPIEGEL: Minister Friedrich, thank you for this interview.