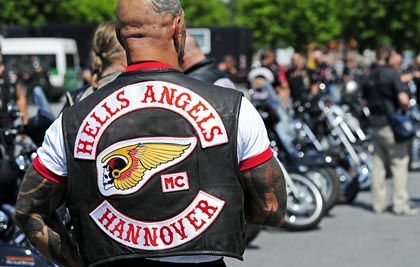 Members of the Hells Angels outside a court in Hanover last year.

The man who generally goes by the nickname Maxe wanted to become a model citizen, at least that's what he said after his release from prison. Markus W. made headlines during a World Cup match over 10 years ago when he and other German football hooligans viciously attacked French policeman Daniel Nivel, leaving him severely disabled. For his part in the attack, Maxe served four years in a French prison for causing "grievous bodily harm."

After his early release in 2002, he promised to transform from a right-wing thug to a social worker. He wanted to study social sciences and work with people who "have problems with society." Maxe said he hoped that young people could benefit from his experience: "I can tell you, boys, violence doesn't pay."

But only 10 weeks after he was released from prison, police were once again investigating him on aggravated assault charges -- although they couldn't prove anything. Following the broadcast of the World Cup final soccer match between Germany and Brazil in the summer of 2002, he was involved in a brawl at a fair near his hometown of Hanover. Since then, Maxe has regularly appeared before judges on a variety of charges -- like insulting a Turk or assaulting an Algerian.

Although he no longer aspires to become a social worker, he has managed to climb the social ladder in one sense: Maxe has worked his way through the ranks in Hanover to become a leading member in the local charter of the Hells Angels motorcycle gang.

Aside from his violent history, German authorities have been keeping an eye on Markus W. because he is part of an alarming development. All across Germany investigators have noted an increasing number of contacts between German motorcycle gangs and militant neo-Nazis.

Observations of the far-right scene by agents of the country's domestic intelligence agency, the Federal Office for the Protection of the Constitution, revealed connections to motorcycle gangs, the government said in a recent statement. It also noted "occasional" indications of "joint activities and meeting places as well as isolated cases of cooperation between right-wing extremists (especially skinheads) and motorcycle gangs, primarily at a local level."

Such "joint activities" at a "local level" take place in Berlin, Brandenburg, Saxony-Anhalt, Saxony and Baden-Württemberg. According to investigators, though, the closest connections between motorcycle gangs and right-wing extremists exist at the Hanover charter of the Hells Angels.

The Hanover boss of the Angels, Frank H., has promoted Markus W. to the position of club secretary, making him his right-hand man and bringing him into the inner circle of this strictly hierarchical club, alongside the treasurer and the sergeant at arms, who is responsible for security. This marks a disturbing development for investigators at the State Office for Criminal Investigation (LKA) in Lower Saxony because the Hanover charter is not just any group -- it is recognized as the largest in Germany and one of the most influential in the worldwide Hells Angels organization.

The LKA in Lower Saxony says that the club in Hanover has connections to organized crime. A team of eight investigators is currently looking into the activities of the motorcycle gang. These law enforcement officials have dubbed themselves EG1, or the "one-percent investigating group," a reference to the Angels' claim that 99 percent of their members are law-abiding citizens, while only one percent are self-proclaimed outlaws.

Although the Hells Angels do their best to maintain the myth of a peaceful club of rugged Boy Scouts on motorcycles, the investigators of EG1 say that many Angels operate like a criminal gang. They "delegate responsibilities and work in a calculated and systematic manner," says Frank Federau of the LKA, adding that they hire the services of PR professionals and top-flight lawyers. In some ways they are "structured like a company."

Investigators have discovered a complex network with right-wing links, from seemingly harmless tattoo parlors to paramilitary units. And they suspect that illegal sources of income are disguised behind security services, merchandising and events.

One such event was the Tattoo Convention held last year in Hanover -- organized by secretary Markus W., alias Maxe. He ensured that shops with close ties to the far-right scene were given every opportunity to display their services. They included a tattoo and piercing parlor located in a nearby town and managed by Hannes F. and Marcel U., two martial arts experts with long-term connections to the militant neo-Nazi scene. The two men have also come a long way in the Hanover charter of the Hells Angels, rising from "hangarounds" to "prospects" -- the final stage before being accepted in the club as a full-fledged member.

Shop owner Hannes F. takes obvious pleasure in serving his customers, and piercer Marcel U. appears particularly eager to welcome "customers who love to experiment." As a source of inspiration he presents tattoo designs that are popular among right-wing extremists, including Wehrmacht soldiers and mysterious runic symbols used by neo-Nazis. They also proudly display a photo album with a picture of a tattoo that is clearly reminiscent of Adolf Hitler's erstwhile deputy Rudolf Hess.

Research by investigators has shown that Hannes F. has been a member of a racist sect called "Artgemeinschaft" ("racial community") as well as of the neo-Nazi group "Hildesheim Kameradschaft." In March 2008, he had to appear before the district court in Halle, in the eastern German state of Saxony-Anhalt. He was charged with working for the "Lower Saxony section" of "Blood and Honor," an international network that markets extreme right-wing bands and has been banned in Germany since 2000. The court found that there was convincing proof that Hannes F. had organized far-right events in the spirit of Blood and Honor even after the ban -- and he was given a fine.

Johannes K. was a co-defendant in the trial in Halle -- and he also has ties to the Hells Angels. He and Hannes F. know each other from the days when they were in Blood and Honor. K. has a tattoo parlor in Hildesheim. The shop drums up business for the motorcycle gang's activities in the red light scene, and sells Hells Angels' merchandising articles.

Johannes K. is a prime example of the myriad connections between motorcycle gangs and right-wing extremists. In addition to the tattoo parlor, K. also runs an army shop with special equipment "from soldiers, for soldiers." In his self-styled "Combat and Survival School," the military aficionado offers a variety of courses, including "marksmanship" training.

According to investigators, the paramilitary exercises organized by Johannes K. were also attended by a member of the "Self-Defense Service of Saxony-Anhalt." This militant group -- whose German abbreviation "SS-SA" blatantly alludes to the Nazi period -- serves as a "national security service" and provides guards at events held by right-wing extremist groups.

The Angels need a good deal of security to protect themselves from nosy outsiders. Even their local clubhouse -- Angels Place -- is guarded by burly men. It stands well protected at the end of a cul-de-sac in Hanover. Unwanted visitors are kept out by muscular guards. This is the local headquarters of Hells Angels boss Frank H., a huge former boxer who is well known to the authorities. Just last December, he threw a party for Angels from all across Germany and wished them "a real good time." Strippers worked hard to create the right party mood -- and the beer from in-house brand "81" did the rest. The name "81" stands for the eighth and the first letter of the alphabet: "HA" as in Hells Angels.

There were also a number of visitors to the party who get their kicks out of the number "18" -- in reference to the letters "AH" for Adolf Hitler. The logo "Max H8" was also visible on the clothing of a number of revelers: "H8" encodes the number "88," which stands for the banned Heil Hitler greeting still favored by many in the right-wing extremist milieu. At the same time, "Max H8" stands for "maximum hate."

Although the police are continuously observing the club, it's hard to pin anything on the Angels. The motorcycle gang in Hanover officially maintains that it is totally apolitical. At least that is the explanation provided by press liaison Django. He says that symbols with a Nazi connection are not political statements, but merely a provocation by some members. The Hells Angels admit that some of their members have a long criminal record, but they point out that this is no reason to stop them joining. The main thing is that they respect the rules of the organization.

One of these rules is a ban on cooperating with the authorities. Motorcycle gangs, just like the Mafia, observe the omertà -- the code of silence. Just a few weeks ago, investigators in Lower Saxony looked on in frustration as the brotherhood of bikers got off lightly once again. A total of 14 Hells Angels from Bremen faced charges in Hanover in connection with the brutal attack on members of a rival gang, the Bandidos. After only two days of proceedings, the judge, public prosecutor and defense agreed to a deal, in large part because the state witness, a former Angel, suddenly refused to testify. As a result, 11 Hells Angels immediately got off with a suspended sentence.

"Gentlemen, stay out of trouble," said Judge Jürgen Seifert as he admonished the howling and hooting bikers. Wishful thinking. The gang members who had traveled to the trial brazenly clapped their hands. In the last row of spectators a smiling Angel applauded. He was wearing a Lonsdale sweatshirt -- a popular brand among right-wing extremists.