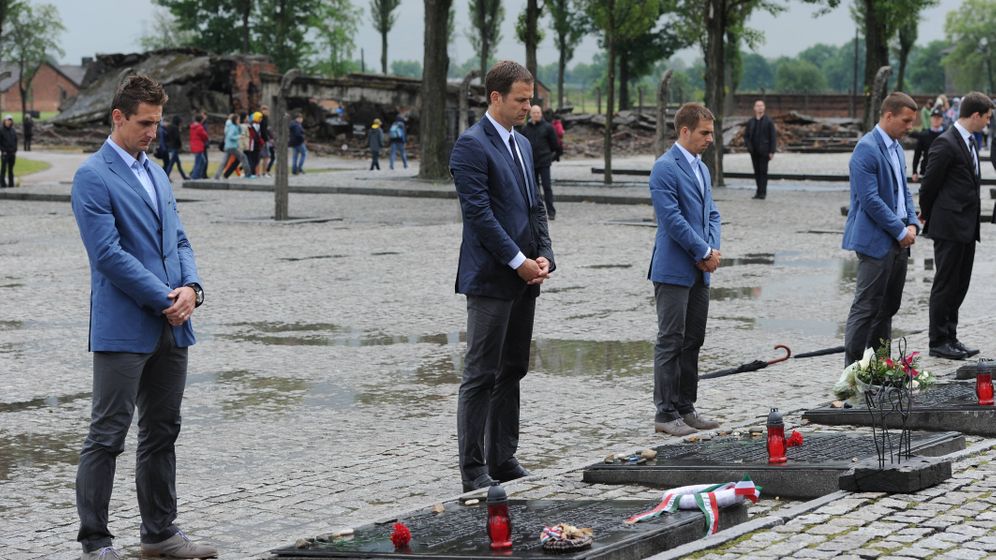 The president of the Central Council of Jews in Germany, Dieter Graumann, on Sunday criticized the German Football Association after only three members of the national team visited the Auschwitz death camp on Friday in the run up to the Euro 2012 soccer championship in Poland and Ukraine that starts on June 8.

"If the whole national team had come, one could have reached hundreds of thousands of young people -- more than a thousand memorial speeches" could reach, Graumann told a meeting of the Council in Hamburg on Sunday, according to a report by the German Catholic news agency KNA. Graumann also pointed out that the whole of the England team planned to visit Auschwitz.

The England players will visit the death camp, which is near their Euro 2012 training base in Krakow, soon after their arrival on June 6, the English Football Association said last month. A DVD will then be produced in conjunction with Britain's Holocaust Educational Trust with players discussing how to combat prejudice today.

Graumann, who had urged the German team in March to visit Auschwitz, on Sunday accused the director of the German team, Oliver Bierhoff, of being insensitive in his choice of words on the matter. Bierhoff, in charge of public relations for the national team, had said in March that the squad would address the Holocaust during the tournament but had not decided in what form that would happen. "It can be a fireside chat or a lecture," he had said. Bierhoff used the German word "Kamingespräch" for fireside chat -- a reference to an informal discussion or briefing. Kamin means fireplace but can also mean chimney, which Graumann said evoked the chimneys of Auschwitz.

He said the use of the word Kamingespräch showed "colossal insensitivity and tastelessness" and was unbearable given "that people in Auschwitz, my grandparents for example, were gassed, incinerated and sent up the chimney."

'Dark Chapter of German History Must Never be Forgotten'

Niersbach laid a wreath at the site where Nazi Germany murdered more than one million Jews. "It is our duty to pay very close attention and above all to keep conveying to young players in our clubs that there must be no room for anti-Semitism, racism and intolerance," he said during the visit.

Bierhoff said: "We wanted to give a sign that a dark chapter of German history must never be forgotten and must never be repeated."

The delegation included the German ambassador to Poland, Rüdiger Freiherr von Fritsch, as well as Charlotte Knobloch, the former head of the Central Council of Jews in Germany.

Bierhoff had said in March that the German team had to focus on its sporting performance while in Poland and that Auschwitz was a long way -- 570 kilometers -- from the team's base in Gdansk on the Baltic Coast. The England team only has a 70-kilometer journey to Auschwitz from its base in Krakow. Bierhoff had added that the DFB wanted to avoid any visit looking like a "PR exercise."