The director of Europe's first state-funded School of Jewish Theology is many things: A scholar and poet; an Israeli of Iraqi and German-Jewish origins; and a "very religious" Jew who is heavily influenced by other faiths, including Buddhism and Hinduism. It might come as no surprise, then, that Admiel Kosman's vision is to encourage interfaith dialogue, and to train rabbis for everyone.

The new school at the University of Potsdam, which opened in November, marks the first time Germany has funded the training of Jewish rabbis and cantors. It is also the first time Jewish theology has been taught as an academic subject at a public university in Europe. The school is "a historical milestone in the training of liberal and conservative rabbis" and "unique both in Germany and Europe," university president Oliver Günther said in a statement at the time of the launch.

Coming just after the 75th anniversary of Kristallnacht, the school is a significant step in post-Holocaust Jewish revival. "In Germany, of all places, where the Jewish intelligentsia -- which had such a large and irreplaceable share in the intellectual prestige of German academia -- was expelled and murdered, Jewish theology is finally being given its proper role," President Joachim Gauck said at the launch.

Germany's Jews first demanded equal recognition in academia nearly 200 years ago, and Kosman is not the only one who sees the school as a direct continuation of this struggle. However holding the school's professorship in rabbinical literature and Talmud -- the collection of writings that constitute the Jewish civil and religious law -- his aim is to "train rabbis not for the Jewish ghetto again" but rather "on the bridge," he says.

Kosman grew up in an Orthodox Jewish family, and spent many years as a student in religious seminaries. He entered academia after studying graphic design and pottery, and first came to Germany to teach at Potsdam University in 2003. Here, he also served as academic director of Abraham Geiger College, a Reform rabbinical seminary, which was the first to open its doors in Germany after the Holocaust. Kosman was already tenured at Israel's Bar Ilan University, but he didn't feel comfortable there, saying he got a lot of flack for speaking his mind in his regular columns in the Israeli press. He still keeps up this writing today, along with poetry, of which he has published some nine volumes.

In Germany, Kosman found an educational and religious framework that was right for him. The launch of the school last month is "the next phase" of this journey, he says.

The school, which will also launch six new professorships, is part of the university's Faculty of Arts. Its 49 newly enrolled students from Germany, Israel, the United States and Eastern Europe will choose from subjects including liturgy and Jewish music history. Students can undertake bachelor of arts and master of arts studies, and the school plans to offer doctoral studies in the future. Those who wish to train as rabbis or cantors can opt either for Abraham Geiger College, or for Zacharias Frankel College, which opened two days before the official launch of the school last month, for the conservative stream of Judaism. The school will more offer courses of study in English, too.

Being part of an arts faculty, and of the wider university, means that students and, crucially, future rabbis and cantors can access courses important for their general education, such as literature and philosophy, options not generally offered in traditional seminaries. "I am talking about openness on a lot of levels. We teach our rabbis to know the Koran and the New Testament," says Kosman.

Natalia Verzhbovska moved to Germany from Russia in 2008, leaving behind her husband and son, and a career as a pianist, to train as a rabbi at Abraham Geiger College alongside a Jewish Studies BA at the University of Potsdam. She chose Germany because there are "very few options" for aspiring female rabbis in Europe, and because of the low cost of studies here. She will start an MA at the new School of Theology when she completes her BA. At the new school, students will be able to engage with Judaism as a living thing, she believes, rather than learning about the faith only through the prism of history and culture. And the meeting with non-Jewish students will in turn enrich future Jewish religious leaders. "You can't avoid interfaith dialogue as a rabbi in Germany," says Verzhbovska.

Kosman "fantasizes" that the school's approach can influence the rabbinate in other countries -- particularly his native Israel, where he sees a serious spiritual crisis among what he describes as the "broken dream" of Zionism. Within this, Israel is growing dangerously fundamentalist, he says, "competing at the moment with Iran in many areas." Orthodox and ultra-Orthodox rabbis in Israel can be closed off and arrogant, he says, and this makes for a harsh political reality. Not only that but if his approach were available in Israel, he says, there would be no secular Jews left in the country.

"Imagine if Israeli rabbis were aware of Kant and of post-modern theory? It would generate a different politics, their relationship to the Arab and the secular person next to them would be different," he says.

In Germany, placing Judaism on an equal footing with Christianity and Islam will give the country's estimated 119,000 Jews more self-confidence, says Harmut Bomhoff, Abraham Geiger College's PR manager. An EU poll published in November found that some two-thirds of European Jews see anti-Semitism as a problem today.

Whether or not the institutionalisation of Jewish theology will help combat this is another question, however. "To say that 'bridge' rabbis will get rid of anti-Semitism in the future, I can't tell you," says Kosman, "but I am sure it will help if more people are in dialogue with Judaism. I am sure that some Germans will see Jews differently." 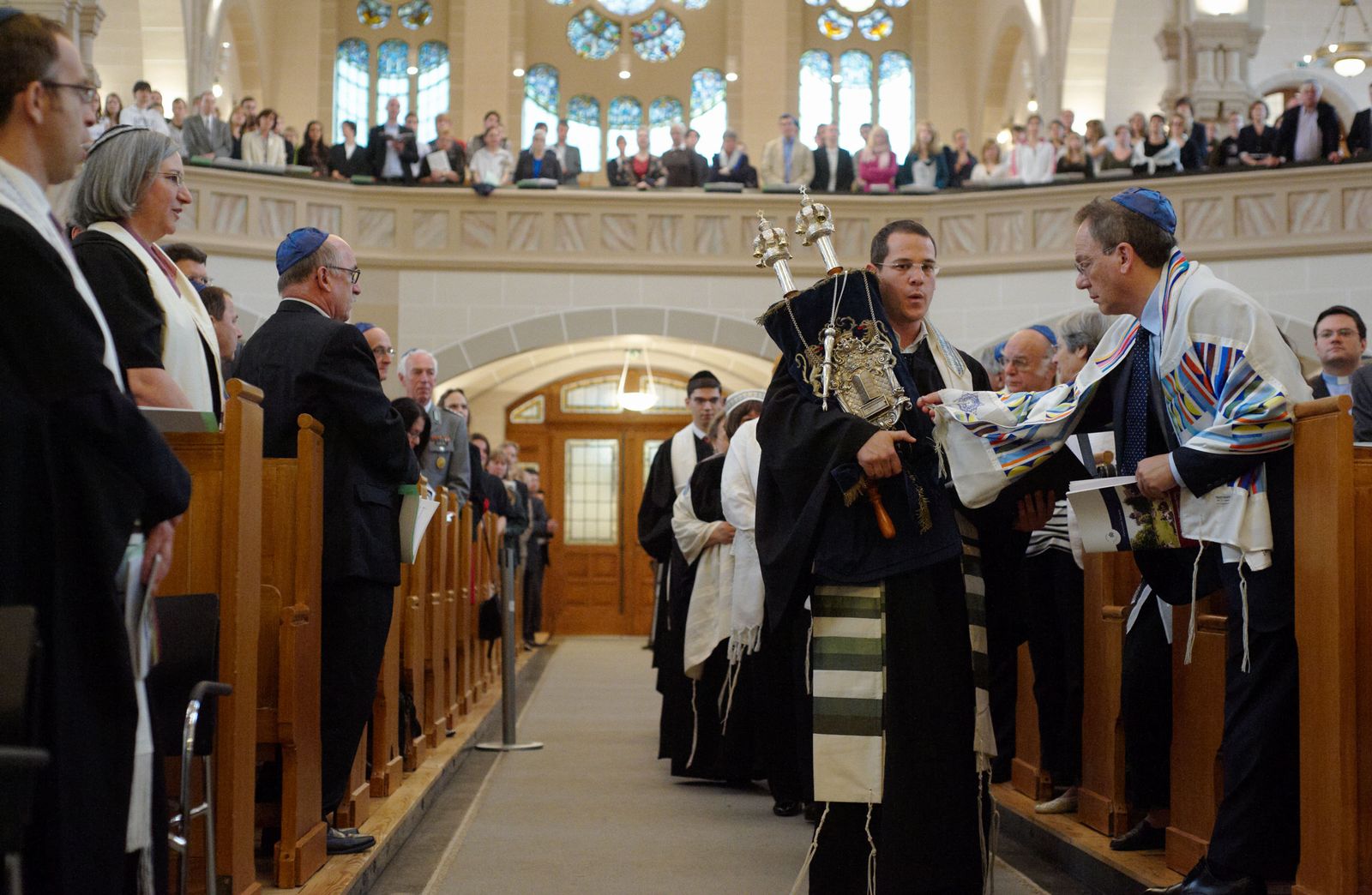 An ordination service at a Berlin synagogue