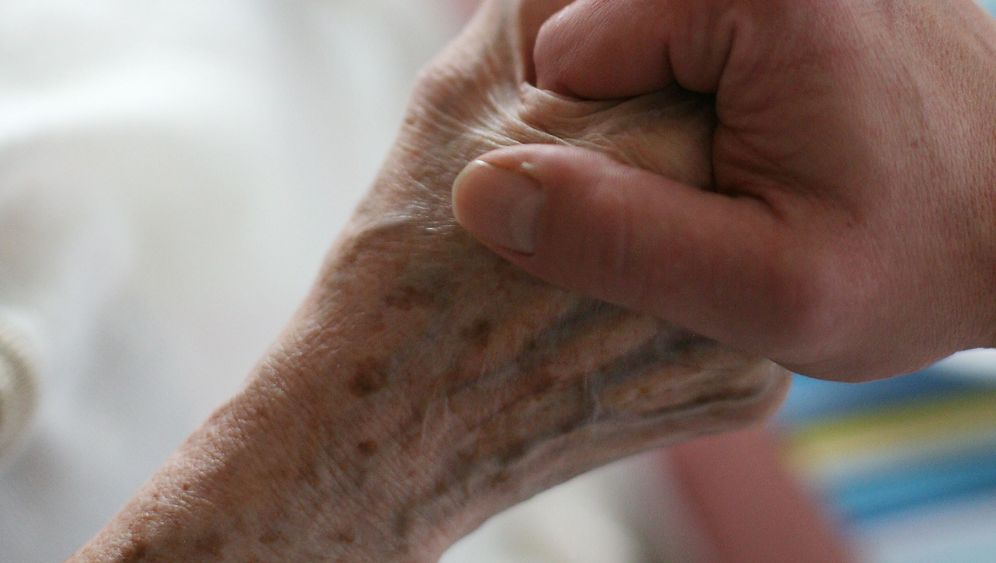 SPIEGEL: Mr. Hoppe, you have always maintained that German doctors do not want to help patients with assisted suicide or active euthanasia. But a recent survey by the German Medical Association (BÄK), which represents the interests of over 400,000 doctors in Germany, shows that 37 percent of all health professionals can imagine assisting patients who wish to commit suicide. One in four doctors would even consider active euthanasia. Has a part of the German medical community turned its back on the official code of ethics?

Jörg-Dietrich Hoppe: No, I see it differently. The survey confirms that a vast majority of doctors can understand the suicide wishes of critically ill patients who are suffering. But the true willingness to assist with those wishes is not widespread. A clear majority still rejects these things.

SPIEGEL: A line in your organization's guidelines on medically assisted suicide says that: "It is contrary to medical ethics for a doctor to assist a suicide." Are one in three of your colleagues now harboring unethical thoughts?

Hoppe: It is precisely that line that we are discussing intensively at the moment. I assume that those who want doctors to be able to assist with suicides haven't given the issue very much thought. This cannot be part of doctors' duties. The public should not be given the impression that doctors are considering death as an alternative to healing, helping or relieving pain.

SPIEGEL: But don't doctors need to consider this if they are serious about a patient's right to self-determination, as guaranteed by the German constitution?

Hoppe: I am convinced that if this attitude spreads, then it will destroy the mutual trust upon which the doctor-patient relationship is based.

SPIEGEL: Still, surveys regularly show that the majority of the population supports the possibility of assisted suicide. And now this shift in values seems to have reached the medical community. Lawmakers no longer consider assisted suicide a punishable crime either. So shouldn't it be left up to patients and doctors themselves to decide what sorts of ethics form the foundation of their trusting relationship?

Hoppe: Up until now, the view of the medical community has been that we don't want killing to be part of a doctor's tools, in any way. We'll see whether it stays that way.

SPIEGEL: Can a professional association even say to one-third of its members that it won't address the fact that they have different medical ethics from the other members?

Hoppe: No, it cannot. Which is why I assume that the current formulation of the guidelines will change to some extent.

SPIEGEL: An example could be the removal of the description, "contrary to medical ethics," perhaps?

Hoppe: We'll see. Once our committee for fundamental ethical and medico-legal principles has completed its work, the issue will be discussed by the board of the German Medical Association and most likely at our annual conference as well.

SPIEGEL: But even within your central commission for ethics there is disagreement on the issue. Last year in SPIEGEL, Jochen Taupitz, a legal expert and a member of your ethics commission, advocated approving medically assisted suicide.

Hoppe: Any doctor who can reconcile his or her ethics with assisting a suicide, may already do so under the today's conditions. Personally, I couldn't reconcile it with my conscience. But I always have an understanding for individual cases. I don't know how many doctors do these things. But unofficially, some things do happen -- and public prosecutors do not do anything about it. However, if we legislate on it, then I worry that it will harm the image of doctors. People could no longer be sure about the attitude with which their doctors are dealing with them.

SPIEGEL: Instead, we currently have a gray area between criminal law, which is more liberal, and the professional code for doctors, which is more rigid. Many doctors fear they could lose their licenses to practice should they assist a suicide. Are they correct?

Hoppe: No. Doctors do not need to be afraid of that. Outside of the case of Hackethal (Editor's note: Doctor and author Julius Hackethal, an advocate of active euthanasia who admitted he had helped his own mother die and was taken to court for his actions) I can't recall any situation in the profession in which a case was brought against a doctor for assisting a suicide.

'There Are Ways' To Help 'Without Fear of Punishment'

SPIEGEL: Yet your organization's professional code states that assisted suicide "can be a punishable offense." What exactly does that mean?

Hoppe: There are borderline cases in which acceptable medically assisted suicide overlaps with homicide -- at the victim's request -- which is punishable by law. If a doctor provides that final treatment for a patient who is no longer capable of doing it him or herself -- for example by administering poison to them -- one prosecutor may view that as active, punishable homicide while another may see it differently. But there are ways for doctors to help their patients without fear of punishment.

Hoppe: Providing a prescription is one way. But there will always be gray areas when it comes to assisted suicide. No single regulation can cover all the various individual cases.

SPIEGEL: The state of Oregon in the United States has had such a law on the books for more than 10 years. It allows doctors to prescribe lethal poison for patients whose life expectancy does not exceed half a year. The patient must be of sound mind, have expressed their wish to die several times, be informed of possible alternatives and be capable of taking the lethal dose without assistance. Everyone knows what is allowed and what is not. What is so bad about that?

Hoppe: In the long run, it will lead to developments that cannot be stopped.

SPIEGEL: But Oregon hasn't experienced some terrible wave of suicides. Out of around 30,000 deaths there each year, only about 60 are assisted suicides.

SPIEGEL: What do you make of the fact that a quarter of your colleagues have shown themselves to be open to active euthanasia, where lethal substances are administered in order to kill?

Hoppe: It unsettles me to think that so many doctors can actually imagine killing a person. We don't want to take on practices from veterinary medicine! My fear is that if this goes on there could be a fatal change in sentiment -- especially in the face of a population that is growing older and suffers more and more chronic illness -- and that we could find ourselves engaged in a discussion about which lives are not worth living.

SPIEGEL: A tumor patient at a Munich clinic committed suicide under medical supervision by refusing food and drink. Doctors made sure she didn't suffer while doing so. Is that sort of thing legal?

Hoppe: Yes. My mother-in-law died in the same way. She was 84, had partial dementia and a tumor. She didn't feel able to communicate anymore. But she wasn't depressed and her will was clear and firm. But she didn't ask anyone to help her with medication. Instead, she decided on suicide by starvation. Her general practitioner supervised this and he considered himself absolutely correct to do so. I supported him in that. I said that if she doesn't want to go on, then we must respect that.

SPIEGEL: The ability to accommodate differing ethical standards is one the greatest advantages of an open society. But many also believe that assisted suicide violates this basic principle. At the same time, voices that are accepting of euthanasia are growing stronger, even within the Protestant Church.

Hoppe: Until now the general view was that it could not be justified in ethical terms. That has changed partially. And we will give that careful consideration in further developing our policies.

SPIEGEL: There are instances again and again, where doctors are placing their own code of ethics above a patient's right to self-determination. Germany's Federal Court of Justice, a high court, recently ruled that doctors are not only allowed to, but are in fact required to, discontinue a treatment as soon as it becomes clear that it is against the patient's will. What will change as a result of this ruling?

Hoppe: Not much. Our guidelines on terminal care have long included this. I have been through this myself. A colleague of mine had amyotrophic lateral sclerosis. He could no longer move anything but his eyes and eyebrows. He wanted to watch his children grow up for as long as possible -- but one day he asked his general practitioner to turn off his respirator. She called me and asked if she was allowed to do so. I told her that if he doesn't want this any longer then, in fact, you must. She was terribly conflicted because her conscience told her she had performed active euthanasia.

SPIEGEL: When it comes to the question of whether life support systems should be turned off, if the patient requests it, 74 percent of the doctors in your survey agreed they should be. The remaining quarter were concerned about patient autonomy. Why do doctors always seem to need lawmakers to tell them how to behave at the deathbed?

Hoppe: Because the patient-doctor relationship has changed enormously. The expression -- "patient autonomy" -- didn't even exist until the 1970s. When I first started working as a doctor, people didn't even ask what they had. They just wanted to know if they would live or if they would die. Patients today are well-informed and have their own wishes. They see themselves as contractual partners -- even if their part of the contract involves seeking advice. Accordingly, legislators have become very involved in the patient-doctor relationship.

SPIEGEL: In fact, in the past it has been lawyers driving the liberalization of medical ethics. For example, the 66th German Judicial Conference called for an end to professional condemnation of assisted suicide by doctors. Can the profession actually forbid something that is actually legal?

Hoppe: Yes, we have that right. It's upheld by law. If we were united on the issue that killing or assisting suicides is not something that is part of a doctor's role, then we could write that into our code.

SPIEGEL: But you aren't united on the issue.

Hoppe: Yes. Another result of this survey is that we need to reconsider whether we want to continue to override criminal law in our professional code on the question of medically assisted suicide. Because certainly don't want to ignore the right to self-determination guaranteed by the German constitution.

SPIEGEL: Mr. Hoppe, we thank you for this interview.