Coming into sudden, unexpected wealth seems like a surefire ticket to living a life of luxury: buying a yacht and a private jet, perhaps, or simply choosing to spend all day on the beach. But it can also plunge a person into crisis -- which is exactly what happened to Jan Henric Buettner.

"You're sitting on top of the hill, and it's inevitably only downhill from here," Buettner says about the period in his life when he struck it rich before even reaching 40. At first, he used his money to buy huge numbers of audiobooks of classic literature. "I could have gone on vacation, but what exactly was I supposed to be relaxing from?" he says.

Buettner didn't start feeling happy again until he knew what he wanted to do with his newfound wealth. And when he made his decision, it wasn't to buy a yacht or a jet. Instead, for a cool €7 million ($9.3 million), he bought an entire 75-hectare (185-acre) village, complete with two kilometers (1.2 miles) of Baltic Sea coast, a run-down palace and over 30 other very historical, but very dilapidated buildings. He also more or less assumed responsibility for the village's 38 residents.

Known as Weissenhaus, the village is situated on Hohwachter Bay, which lies just 80 minutes by car from downtown Hamburg on Germany's Baltic Sea coast. Since 2008, Buettner has been converting the village into a vacation resort for the super-rich, with the rooms and suites scattered throughout its old houses. "Grand hotel" wasn't quite good enough a descriptor, it seems, so Buettner calls his project a "grand village." Known as the Schlossgut Weissenhaus, which translates as "Palace Estate Weissenhaus," the resort is set to open this spring.

By that point, Buettner will have invested €50 million in his hotel village. A portion of that funding comes from his own assets, wealth he acquired thanks to an unusual stroke of luck -- and to the unfathomable workings of the US justice system.

Buettner moved to Santa Barbara, California, in 1997, working as a general partner to establish a venture capital firm for the Bertelsmann corporation. He had previously managed AOL Germany for Bertelsmann, a major media company headquartered in the northeastern city of Gütersloh.

Then, in February 2000, at the peak of the new economy's heyday, Bertelsmann sold its 50 percent share in AOL Europe for over $6.5 billion. When news of that deal went public, two former Bertelsmann employees had something to say about it. Jan Henric Buettner and Andreas von Blottnitz both felt that they had played a significant role in building AOL Europe up -- and demanded $3.5 billion of the profits from its sale.

What followed over the next three years could fill a legal thriller. Thomas Middelhoff, then-CEO of Bertelsmann, testified in a California court, as did expert witnesses charging $1,000 an hour. The main issue at stake was: What exactly did it mean when Middelhoff allegedly promised the two men a "share"? Did he mean a share in Bertelsmann's standard program for its executives? Or profit-sharing? Or perhaps even equity participation?

The jury ultimately ruled in favor of Buettner and Blottnitz, awarding them €209 million, though an out-of-court settlement would later lower the figure to €160 million. Even after taxes and hefty legal fees, that still left both of the men a considerable chunk of cash. "Relative independence suddenly became total independence," Buettner says.

Despite the millions, at least to his mind, Buettner leads a relatively modest life. He rents an apartment in Hamburg's HafenCity district, where "the constant rent increases are annoying," and he swims laps every morning in the basement pool of the Park Hyatt Hotel. Then he drives his 6-year-old Aston Martin ("my company car") to the office: Café Elbgold, in Hamburg's trendy Schanzenviertel neighborhood.

Once a month, he flies back to Santa Barbara to visit his two children, who live there with his ex-wife. There, he also manages around 20 private stakes he has in a number of Internet firms. Among other things, his fund has successfully sold shares in Groupon, Sonos and Kaufda, all of which have become major players in their particular sectors.

Fixated on an Improbable Idea

Buettner could have stayed in sunny California. Blottnitz, his former colleague, now lives in South Africa, where he spends much of his time on the beach. But since that kind of lifestyle was unimaginable for Buettner, he had to figure out what to do with all his money. Just putting it in the bank wasn't really an option, he says, because one doesn't "get much of an interest rate on large amounts."

At one point, Buettner invested €1.5 million -- only to watch it suddenly shrink to €35,000. His financial adviser consoled him by saying that he had invested his own money in the same place and also lost a great deal. "I don't give a damn what he does with his money, I told him," Buettner says. He'd had enough. He wanted to create something lasting, something he could reach out and touch in the truest sense of the word.

That he is now pouring his money into the land around Hohwachter Bay is only partly a coincidence. Buettner spent vacations here as a child, and his family has a vacation home very close to the Weissenhaus palace. When an acquaintance showed him a newspaper article about how the palace was up for sale, Buettner bought it.

At the time, Buettner didn't have any particular plan about what he wanted to do with the property. But he quickly became obsessed with the idea of creating a luxury hotel complex. He signed on Hans-Wilm Zühlke, a veteran supervisor of 180 hotel projects, as his head of development. "Rich people find things they don't like all over hotels," Zühlke says in describing the guiding idea behind the complex. "Buettner wanted to do all that differently."

Although Buettner had no experience in the hotel business, he did have well-defined ideas about how things should be: When a guest gets out of the pool, a member of the hotel staff should already be standing by with a towel in hand. The hotel is to have seven restaurants, child care facilities and a bookstore in addition to offering a broad range of physical activities. Upon arrival, guests will relax in an armchair rather than stand at a reception desk. The high-end sound systems in each room can be operated by remote control, the keycards will be platinum-colored, and a "latte artist" will train the hotel staff in exactly how to operate the coffee machine.

Buettner is modeling his facility on Schloss Elmau, a five-star hotel located in a former palace in southern Bavaria. The hotel boasts a heated rooftop pool, a spa area of more than 5,000 square meters (54,000 square feet) and top-quality cultural events, such as performances by classical violinist Gidon Kremer and jazz trumpeter Till Brönner.

"I analyzed Schloss Elmau down to the last detail," Buettner says. "Why shouldn't the same thing work in northern Germany as well?"

As a result, one of Germany's poorer regions has become home to one of the country's most ambitious hotel projects. "Of course, economically speaking, the area doesn't exactly lend itself to this," Buettner says. "But the people who live there aren't the ones staying in the hotel."

Fifteen of the village's original inhabitants still live in Weissenhaus, most of them elderly women. Buettner has promised all of them that they can live there as long as they like -- at the favorable rental price of around €3 per square meter (10.8 square feet). As houses become available, Buettner plans to gradually expand his hotel complex.

More Bang for Your Buck

But is it even possible for such an idea to work, a grand hotel spread across such a large area, where the evening's pumpkin soup has to be ferried around to the guests by electric car? And in a region where it's difficult to find qualified personnel?

Buettner counters such doubts with data he keeps on a laptop. Indeed, Buettner believes that success is something that can be calculated, and he constantly analyzes everything. With the click of a mouse, he can call up any fact: that he's invested €7 million in infrastructure, that the construction of 1,000 parking spaces in Weissenhaus cost him €748,000, that road construction and the outdoor facilities gobbled up €1 million a piece. He's even calculated the exact price of a massage in the hotel's spa: €2 per minute.

Buettner recently viewed one of the apartments in Hamburg's half-finished Elbphilharmonie concert hall that will sell for millions. He says he was even irritated by its slightly opaque window glass. "Every expense should return an equivalent value," he says.

Precisely this idea forms the basis of his hotel concept, one developed by a millionaire for millionaires. Buettner offers an example: "Even a rich person doesn't want to wake up in the middle of the night thirsty and have to decide whether quenching his thirst is really worth opening up an €8 mineral water from the minibar." So, at Schlossgut Weissenhaus, he explains, the contents of minibar are already included in the price. 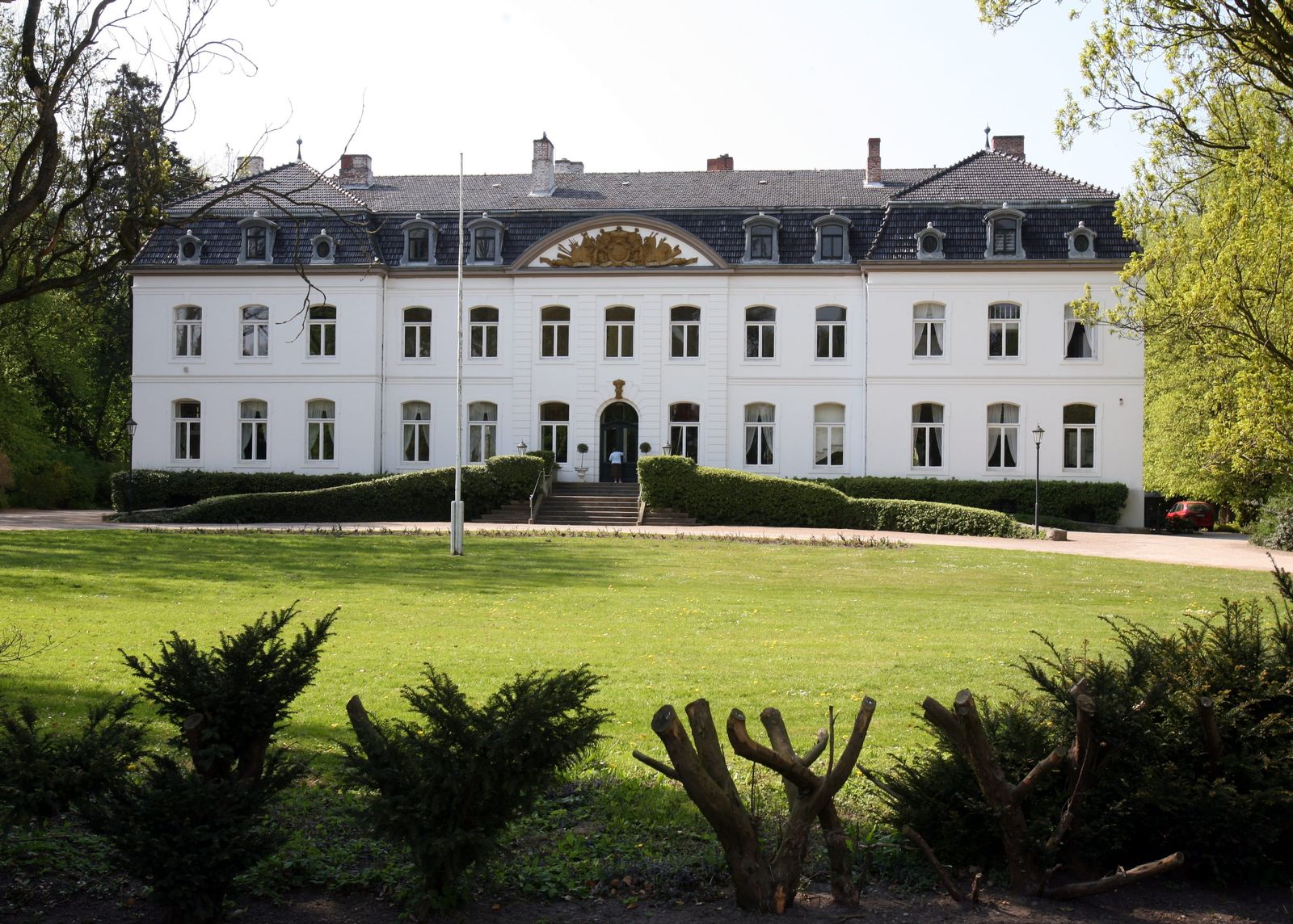 This formerly run-down palace will be the centerpiece of a new luxury hotel village in northern Germany.