The Munich court handling the historic trial of neo-Nazi Beate Zschäpe on Monday adjourned proceedings until May 14 after her lawyers accused the presiding judge of being biased because he had ordered them to be frisked for weapons before entering the courtroom. Members of the prosecution weren't subjected to searches.

The adjournment on the first day is a fresh indication that the trial, which is being closely watched in Germany and abroad, especially in Turkey where most of the victims came from, will be lengthy and complex. The prosecution didn't even get a chance to read out the charges.

38, dubbed the "Nazi bride" in the German media, is believed to be the sole surviving member of the National Socialist Undergroundterrorist group that claimed responsibility in 2011 for murdering nine immigrants, eight of them of Turkish descent and one Greek man, as well as a German policewoman between 2000 and 2007.

The other two members, Uwe Mundlos and Uwe Böhnhardt, committed suicide in November 2011 after a botched bank robbery. Only after that did their involvement in the killings come to light.

Shortly after the trial started, Zschäpe's lawyers filed a motion claiming that judge Manfred Götzl was unfit to run proceedings because the weapons searches placed them under suspicion of "being involved in forbidden and criminal actions."

The judge then ordered the adjournment to consider their motion, along with another motion brought by a co-defendant.

The police never seriously considered that the motive may be racismand instead suspected that the victims, who included a flower seller, a grocer and a part-time tailor, themselves had links with criminal gangs.

Last month, Germany apologized for those errors at the United Nations Human Rights Council in Geneva, describing the murders as "without a doubt one of the worst human rights violations in Germany in the last decade."

Chief Prosecutor Herbert Diemer warned on Monday against expecting too much of the trial. "The court proceedings are focused on the crimes and on the people charged with those crimes," he told a news conference. "It cannot be the aim of the trial to clear up possible mistakes made in past investigations and proceedings."

Zschäpe walked into the courtroom smartly dressed in a white blouse and black blazer, with her arms crossed defiantly. She wasn't handcuffed and quickly turned her back on the photographers and film cameras, and on the relatives of the victims desperate finally to see justive done. She chatted quietly with her three lawyers and seemed relaxed.

Four alleged accomplices, all of them committed neo-Nazis, are also in the dock in the mammoth trial in which over 600 witnesses will be called to testify. A total of 84 court days have been slated but that may not be enough. Some observers are saying the trial could last more than two years.

One of the defendants, who can be named only as Andre E. due to German privacy laws, has the words, "Die Jew Die" tattooed on his stomach.

"With its historical, social and political dimensions, the NSU trial is one of the most significant of postwar German history," lawyers for the family of the first victim, flower seller Enver Simsek, said in a statement. 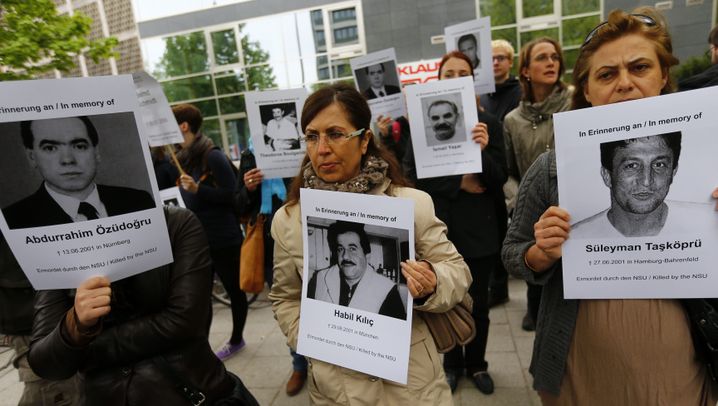 'Why Were the Authorities Blind?'

Some 500 police officers were deployed outside the courthouse -- where several hundred demonstrators, some waving the Turkish flag, demanded that justice finally be done, 13 years after the first victim, Simsek, was murdered in cold blood. Some held up photos of the victims. One banner read "Why were the authorities blind?"

The chairman of the Turkish Community in Germany, Kenan Kolat, said the defendants should get life in prison. "This is a historic trial. It's not enough to convict the accused," Kolat told Mitteldeutsche Zeitung newspaper on Monday. "We hope that the maximum sentences will be imposed. And the maximum sentence is life."

The trial start was delayed by almost three weeks because of controversy over the allocation of seats for the media. In the first round, no Turkish news organization obtained a press pass, which caused an uproar that threatened to further tarnish Germany's reputation.

Every aspect of the case is proving to be sensitive, including the names of Zschäpe's defense lawyers. Both the German and British press have remarked on the fact that the the alleged NSU member is being defended by Wolfgang Stahl, Wolfgang Heer and Anja Sturm, surnames that evoke German Nazi history -- although none of the lawyers are of a far-right political persuasion.

However, the lawyer representing the defendant Ralf Wohlleben, Nicole Schneiders, used to have a regional leadership post in the far-right National Democratic Party. Wohlleben, 38, stands accused of having provided the NSU with the murder weapon -- a Ceska Browning pistol used in all the killings. 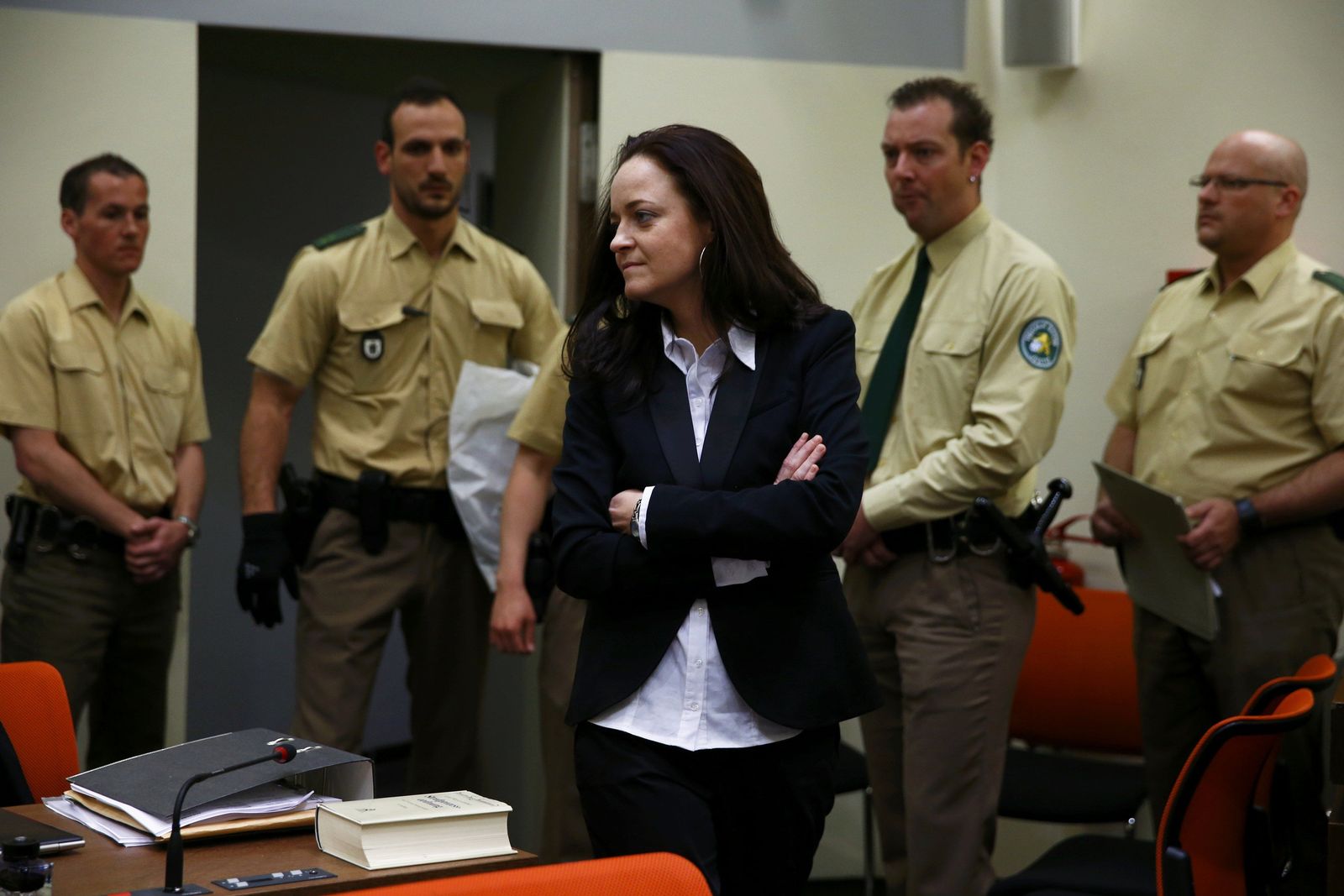 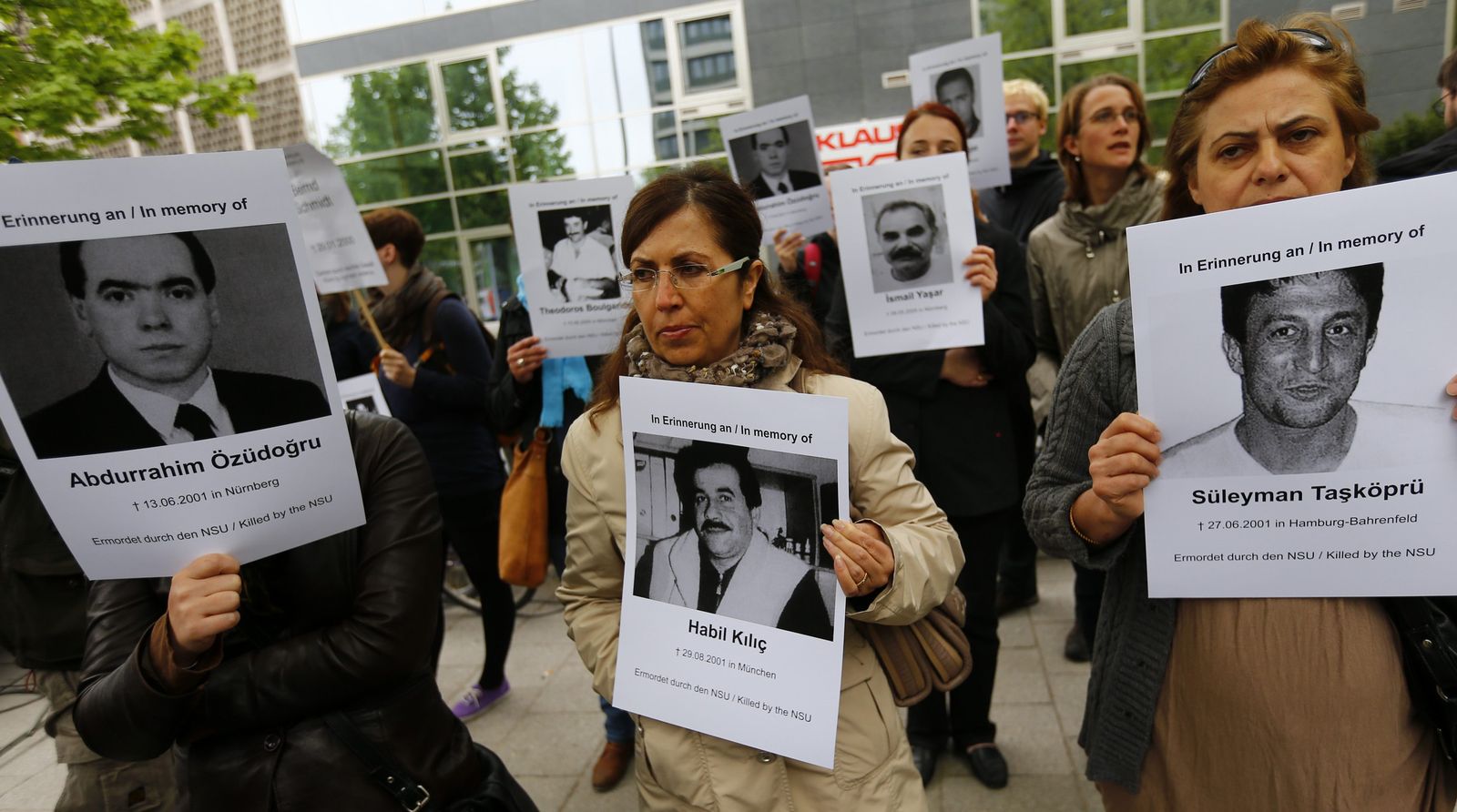 Demonstrators outside the courthouse hold up photos of victims of the terror cell.

Beate Zschäpe arrives in the courtroom. 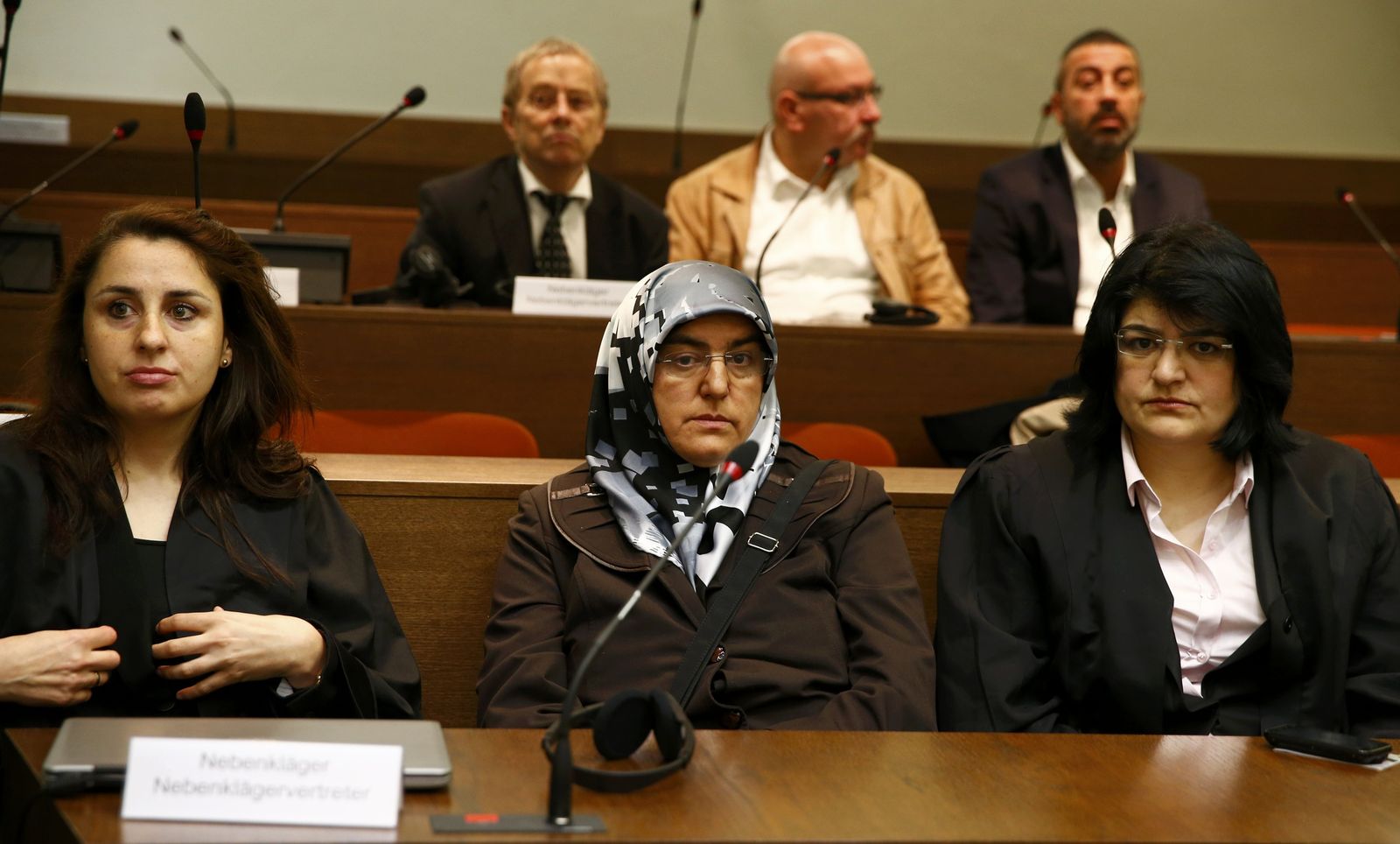 Adile Simsek (center), widow of NSU victim Enver Simsek, sits among her lawyers in the courthouse before the start of the trial.