The attack on the Israeli team at the 1972 Olympic Games in Munich took place over 40 years ago, but Wolfgang Eisenmenger still has precise memories of the day after. Eisenmenger was 28-years-old at the time and though he would go on to become a renowned expert in his field, he had only just joined the Forensic Institute at the University of Munich.

That day, he was together with around a dozen others -- colleagues, a judge, a prosecutor and several police officers -- in the autopsy room. The mood was dour as Eisenmenger and the other doctors worked silently at the autopsy tables. Their task was that of examining 16 bodies, but their first priority was the Israeli victims because Tel Aviv was insisting that their remains be rapidly repatriated. Later, the coroners performed autopsies on the Palestinian hostage-takers and that of the Munich police officer who had been killed in the firefight.

The terror commando infiltrated the Olympic Village in the early morning hours of Sept. 5 and took 11 Israeli athletes and delegation members hostage. Early on, the Palestinians shot and killed wrestling coach Moshe Weinberg and middleweight weight-lifter Yossef Romano after the two had attempted to fight back and wrest the weapons from the perpetrators. The other Israelis died that evening at the Fürstenfeldbruck military airport when the police launched a rescue attempt, in response to which the hostage-takers killed their victims. Five terrorists were also killed in the operation.

Just hours after the gun battle, Eisenmenger drove to Fürstenfeldbruck with his boss to examine the scene. A short time later, the remains of the victims were brought to the Forensic Institute and the autopsies began.

Nothing that Couldn't Be Explained By Events

Eisenmenger remembers finding nothing that was particularly surprising. None of the bodies of the Israelis, he recalls, displayed injuries that couldn't be explained by what had happened. The statement may sound rather mundane, but it is noteworthy. On Tuesday, the New York Times reported that the Israeli victims had been tortured prior to their deaths. The paper wrote that the attackers had broken their victims' bones and that the 32-year-old Romano, father of three, had been castrated in front of the others, either while he was still alive or after he had died.

The article received significant attention worldwide. The British Independent deplored the torture, the Kurier in Vienna wrote of "sadistic abuse," and the right-wing conservative Israeli daily Israel HaYom compared the Olympic attackers with Islamic State, saying that the Palestinian terror group was "a precursor" of IS.

The New York Times piece is the product of interviews with Ilana Romano, the widow of the murdered weight lifter, and with Ankie Spitzer, who lost her husband, fencing coach André Spitzer, during the failed raid at Fürstenfeldbruck. The two women showed the story's author photos of the victims -- images that they feel tell a clear story. The New York Times elected not to print the photos due to their graphic nature, but agreed with the interpretation of the two women. It wasn't the first time that Spitzer had made the torture claims. But it was the first time that such a prominent news outlet had been willing to listen.

Genscher Says He 'Never Heard Anything' About Torture

But the statements of coroner Eisenmenger cast doubt on the story. He says that "none of the victims showed indications of torture or the detachment of genitalia." And he isn't the only witness who is skeptical of the torture claims. Hans-Dietrich Genscher, who was German interior minister at the time and part of the crisis team assembled at the Fürstenfeldbruck airport, says today he "never heard anything about (torture) either officially or unofficially."

Genscher was one of the last people to see the victims alive. He was part of the team that was negotiating with the terrorists, who had initially demanded an exchange for the release of Palestinian prisoners in Israel, a request rejected by Tel Aviv. When the kidnappers then demanded to be flown to Egypt with their captives, Genscher insisted on being allowed to speak with the hostages.

He entered the Israeli quarters of the Olympic Village at around 5 p.m. Romano was still lying on the floor, covered by a sheet. The others were sitting together in a small room, their hands and feet bound and gave Genscher the impression of being composed. They gave him a list of their names and spoke with him. Genscher says he "didn't have the impression that they had been tortured." Might he have been wrong?

Spitzer and Romano, both 69, speak for the families of the Israeli victims of the attack -- and they are extremely skeptical of both the Forensic Institute where Eisenmenger worked and of ex-minister Genscher.

Prior to the hostage-taking, German officials had ignored warnings of an impending attack. Furthermore, the rescue attempt at Fürstenfeldbruck was extremely amateurish. In the aftermath, officials in the West German and Bavarian governments adopted a a maxim formulated in a memorandum by a representative of the Foreign Ministry. "Mutual incriminations must be avoided," the memo reads. "Also, no self-criticism." SPIEGEL first reported on the existence of the agreement in 2012.

Spitzer, a journalist originally from the Netherlands, spent the Games visiting her parents in Holland. She spent years fighting against the silence emanating from the federal government, the Bavarian government and the city of Munich. Spitzer can produce shamefully callous letters from German officials, such as one from a senior Munich administrator who informed her that the Munich police department had "never possessed a single legal identity" and that she should address her concerns to "the appropriate legal body."

One issue was compensation. Twice, Spitzer and the others sued for damages, and both times they were rejected on the strength of the statute of limitations. However, finding out the truth was of equal or even greater importance to the two. But requests to look at case files, Spitzer says today, were repeatedly rejected. In the years 1972 and 1973, she visited the Forensic Institute in Munich three times and demanded access to the requisite files. She was sent away all three times.

A quarter-century passed before Germany made any kind of official persuasive gesture to the victims. In 2000, then German President Johannes Rau met with Spitzer and Romano. Two years later, the German government paid out at least €3 million to the victims' families as a humanitarian gesture. And on the 40th anniversary of the attack in 2012, Bavarian Governor Horst Seehofer promised to release as many documents relating to the deaths as he could.

No Indications of Torture in Documents

The majority of the documents are kept in government archives in Munich, including the autopsy reports of the murdered Israelis, copies of which SPIEGEL has obtained.

They are impressively precise documents. One report, for example, notes that the watch worn by Zeev Friedman, the 28-year-old weight lifter, was still ticking when his lifeless body was lifted onto the autopsy table. It said it was 7:51 p.m. Friedman died of internal bleeding.

The coroners also noted that Eliezer Halfin, a 24-year-old wrestler who died from a bullet to the heart, had Vivil mints in both pant pockets. In the report about Yossef Gutfreund, a wrestling judge, it says: "The corpse is covered with a light-green jacket of the kind worn by judges at the Olympic Games."

There are no indications of torture in the documents, not even in the report about Yossef Romano. The murderers killed him with seven shots "to the posterior and to the lower extremities." His genitals were injured, but the report only allows for the conclusion that the wounds were the product of the bullets. There is no mention of castration.

Nevertheless, Ilana Romano and Ankie Spitzer believe that their husbands were tortured. SPIEGEL presented them with Yossef Romano's autopsy report, but they aren't convinced of its rigor. It is, they say, a report that the German government could live with.

SPIEGEL was able to see four of the photos that Spitzer and Romano say they showed the New York Times. Two of the images are of Yossef Romano's corpse in the Israeli quarter of the Olympic Village. He is wearing a white undershirt and there is blood visible in the area of his genitals -- though only an expert might be able to tell what caused the injury.

Ilana Romano and Ankie Spitzer have no doubts -- not after 43 years and all of the suffering they have been forced to endure. Ilana Romano says she is certain. "I have the picture. I know what happened." 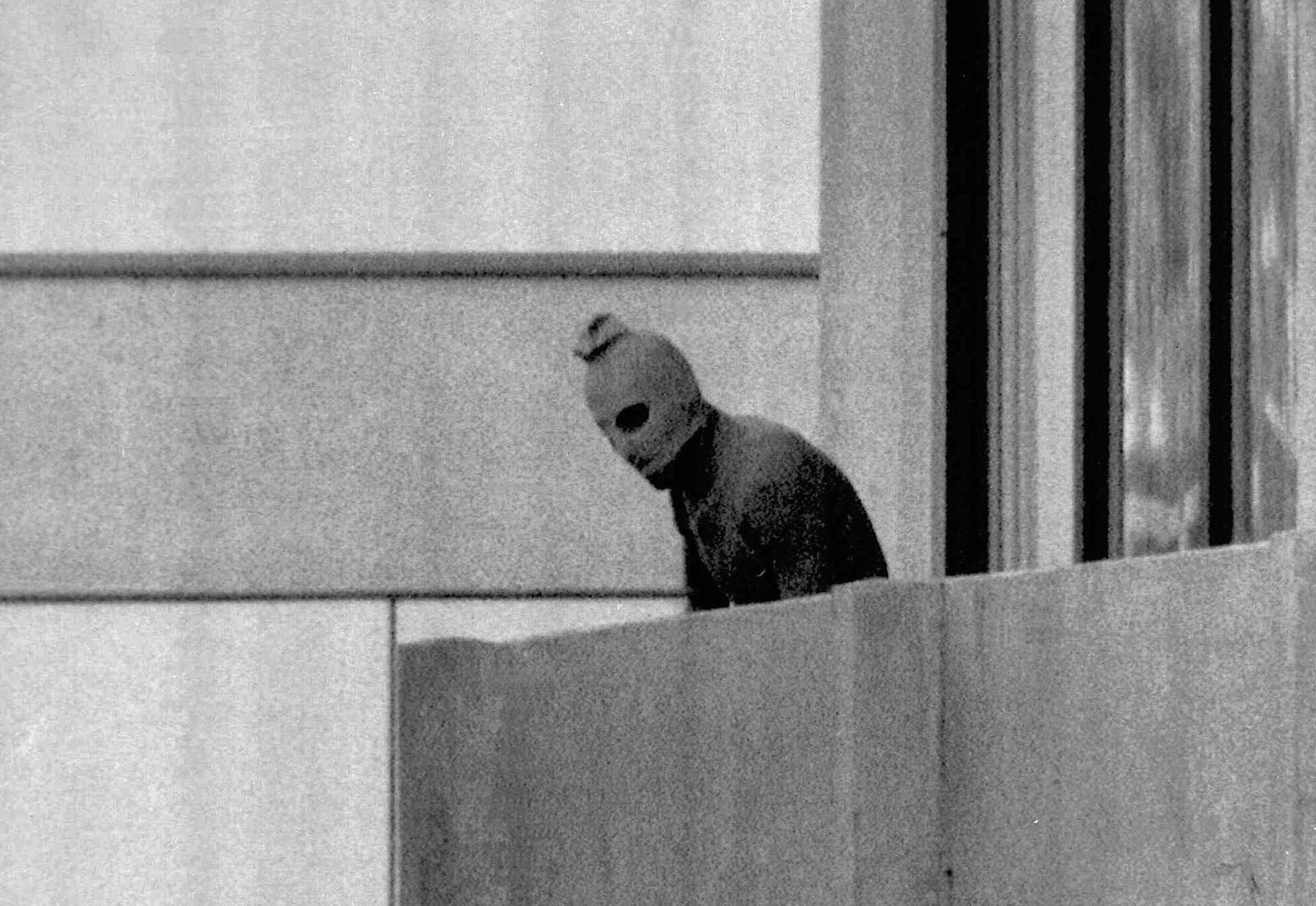 A masked Palestinian terrorist on the balcony of the Israeli athlete quarters at the Olympic Village in Munich in 1972: An explosive report published this week claims terrorists tortured the athletes before killing them. 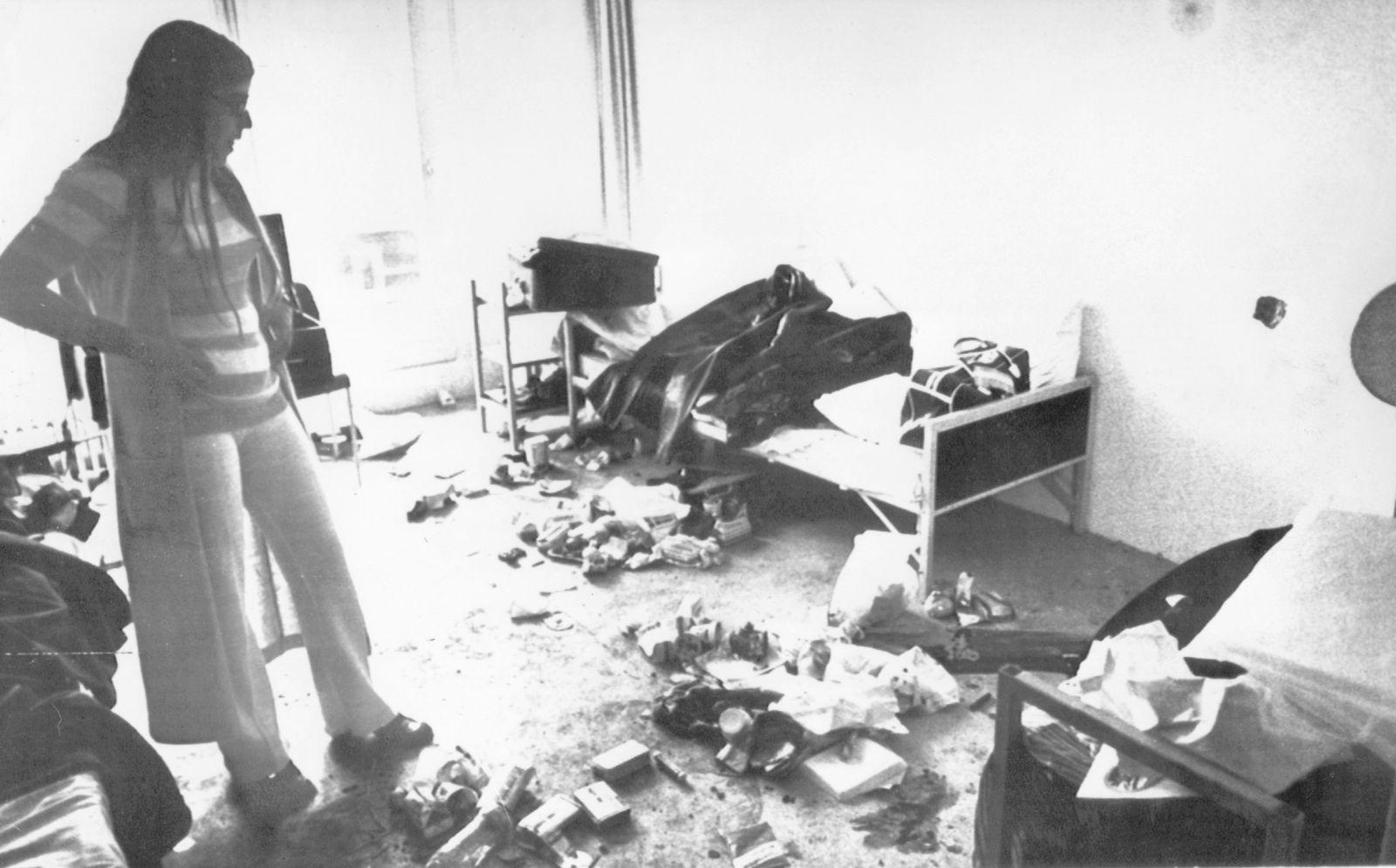 In this archive photo, Ankie Spitzer, the widow of murdered fencing coach André Spitzer, is seen viewing the devastated apartment of the Israeli athletes in the Munich Olympic Village on Sept. 9, 1972.