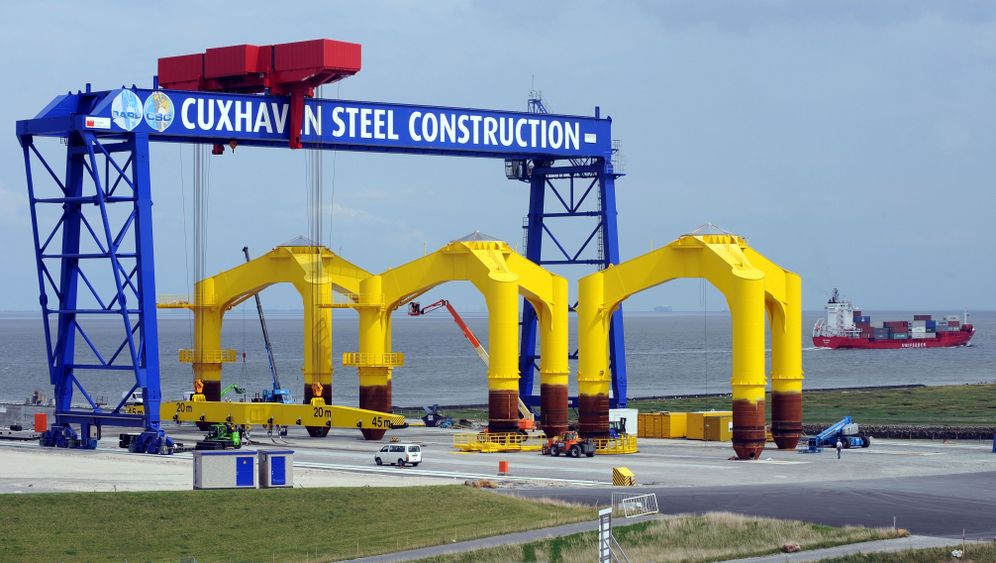 The new power plant 15 kilometers (9 miles) off the North Sea island of Borkum is a masterpiece of German engineering. In only 14 months, experts anchored dozens of giant rotors to the sea floor. The 150-meter (492-foot) wind turbines at the Riffgat offshore wind farm work perfectly.

Providing clean electricity to 120,000 households, Riffgat was expected to become a milestone of the federal government's shift away from nuclear power and toward green energy.

But the dedication of the first commercial German wind farm in the North Sea on August 10 is set to be a low-key affair. Chancellor Angela Merkel cancelled her scheduled appearance. And Environment Minister Peter Altmaier and European Union Energy Commission Günther Oettinger, both members of Merkel's center-right Christian Democratic Union (CDU), have hesitated to accept the invitation from EWE, an energy company based in the northern German city of Oldenburg.

The reason is that Riffgat has a cosmetic defect: the wind farm is still missing part of its power line to the mainland. For the time being, instead of producing energy, Riffgat is actually consuming it. To prevent the rotors from corroding in the salty air, they have to be supplied with electricity produced with diesel generators.

Grid operator Tennet is responsible for the missing power line. The delay is costing EWE millions of euros, costs that will eventually be passed on to electricity customers. Instead of being a showcase project, Riffgat has become a symbol of the government's failed offshore wind policy.

The Germans invested in offshore wind farms because the wind blows constantly at sea and no land area is needed. But they were also keen to avoid spoiling the view from the North Sea resort islands, which is why Germany's wind farms, unlike those in England and Denmark, are not near the coast.

But the solutions developed by engineers proved expensive. The public became increasingly skeptical as it saw its electricity bills going up, and politicians began discussing a cap on electricity prices.

The shift in the direction of political winds immediately affected the turbine builders. Several companies that were recruiting on a large scale only a few months ago are now laying people off. One company, Siag Nordseewerke, has filed for bankruptcy, and others could soon follow. The offshore boom has hardly begun, and yet it already seems to be over.

Half a dozen wind farms are still being built in the North Sea, but there are no follow-up contracts. "The market has collapsed," says Ronny Meyer, the managing director of Windenergie Agentur (WAB), based in the northern port city of Bremerhaven. Riffgat developer EWE also doesn't want to invest in additional offshore turbines.

From Boom to Bust

Until last year, the construction of wind farms was seen as an opportunity to regenerate Germany's coast. Cities like Bremerhaven, Cuxhaven and Emden, ailing for years in the wake of declines in the shipbuilding and fishing industries, were booming. An estimated €1 billion ($1.3 billion) was invested in port facilities and factory buildings, and some 10,000 jobs were supposedly created. In Cuxhaven alone, the state of Lower Saxony invested €125 million ($165 million) in the harbor. Each square meter of the wharf can now support 90 tons, so that the turbine foundations can be loaded onto construction ships.

Today, only seagulls are landing at the new harbor facility. The grounds of Cuxhaven Steel Construction (CSC) cover an area of 70 soccer fields, and in the middle is a large building, 270 meters long and 52 meters high. Until this spring, this is where foundations for the Bard Offshore 1 wind farm, now being built about 100 kilometers off the coast, were being welded together. CSC hasn't had any work since then, and almost all of its 450 employees were laid off.

The parent company, Bard, hasn't had much luck attracting investors. Once the foundations were built, the company turned to rotor production. Of Bard's initial 1,000 employees, only those who will operate the wind farm will remain. A company spokesman couldn't say how many employees that would be.

Close to the CSC premises, Austrian construction company Strabag had intended to build concrete foundations with 500 employees. A few weeks ago, Strabag quietly closed its office in Cuxhaven. The 15 wind farms in the North Sea in which the company had planned to invest will not be built, at least for now.

CSC's other neighbor, a company called Ambau, is still making steel towers for the wind turbine generators. But, says Ambau head Kai Simon, "we only have work in Cuxhaven until the end of the year. I don't know what'll happen after that." The company was actually planning an expansion, but the building permit is now sitting in a drawer.

The same grim scenario is unfolding all along the coast. China's Hantong Group had planned to build a plant in Wilhelmshaven, but now the Chinese have temporarily stepped away from production in Germany.

There are several reasons for the industry's problems. Grid operator Tennet, which readily admits that it is underfinanced, has also failed to connect wind farms to the power grid on schedule in other locations. But the industry is mostly critical of the lack of investment security. Economics Minister Philipp Rösler, a member of the pro-business Free Democratic Party (FDP), and Environment Minister Altmaier announced plans for a cap on electricity prices in February. This could reduce the guaranteed feed-in tariffs for green energy in order to keep costs low for consumers.

This alarmed the industry. Operators of offshore wind farms depend on sufficiently high electricity prices to refinance their investments. "Although the cap on electricity prices was never approved, it made investors very anxious," says wind energy expert Meyer.

Many along the coast are pinning their hopes on the upcoming national election in September. "We need planning certainty," Lower Saxony's Environment Minister Stefan Wenzel, a member of the Green Party, said during a visit to Cuxhaven. Jürgen von Ahnen at the Economic Development Agency of Cuxhaven claims that the industry has merely "bottomed out," and that things will go uphill again after the election, no matter who is in power.

There is little reason for such optimism. The government has increased the incentives for electricity from offshore wind turbines several times to help the industry get off its feet. Now the wind farm operators will receive 19 cents for each kilowatt-hour fed into the grid for the first eight years after construction. This is more than twice as much as is paid for electricity from terrestrial wind turbines.

Growing numbers of critics say that the offshore wind turbines are too expensive. The criticism comes from Germany's southern states and is politically motivated to some extent, because the south doesn't want to leave the generation of wind energy to coastal areas. This explains why the government in the southwestern state of Baden-Württemberg has no qualms about building turbines in the Black Forest, while neighboring Rhineland-Palatinate is even proposing the construction of wind farms on ridges in the scenic Hunsrück and Eifel regions.

If offshore wind receives new impetus, despite the southern lobby, it will have to search for large numbers of personnel again. In 2008, when the first boom began in Cuxhaven, the companies had trouble finding qualified workers. The employment center provided training for hundreds of welders, scaffold-builders and crane operators. Now there are trained teams but no jobs. "Those who can, seek alternatives, such as with aircraft manufacturer Airbus," says Manfred Wendel, head of the Cuxhaven continuing education center. "The learning curve experienced by the experts when they built the first parks could be lost," says Christian Dahlke, in charge of offshore wind farms at the Federal Maritime and Hydrographic Agency.

Steelmaker Dillinger Hütte has come up with an interesting strategy. The company is currently building a new plant for 300 workers in Nordenham, on the lower Weser River. "We have good market analyses and believe that things are moving forward with offshore," says Managing Director Ralf Hubo, explaining the optimistic project. "The crisis helps us find good and inexpensive workers," he says. He doesn't have any large contracts, but that isn't a problem, says Hubo, noting that he could also sell his products abroad. 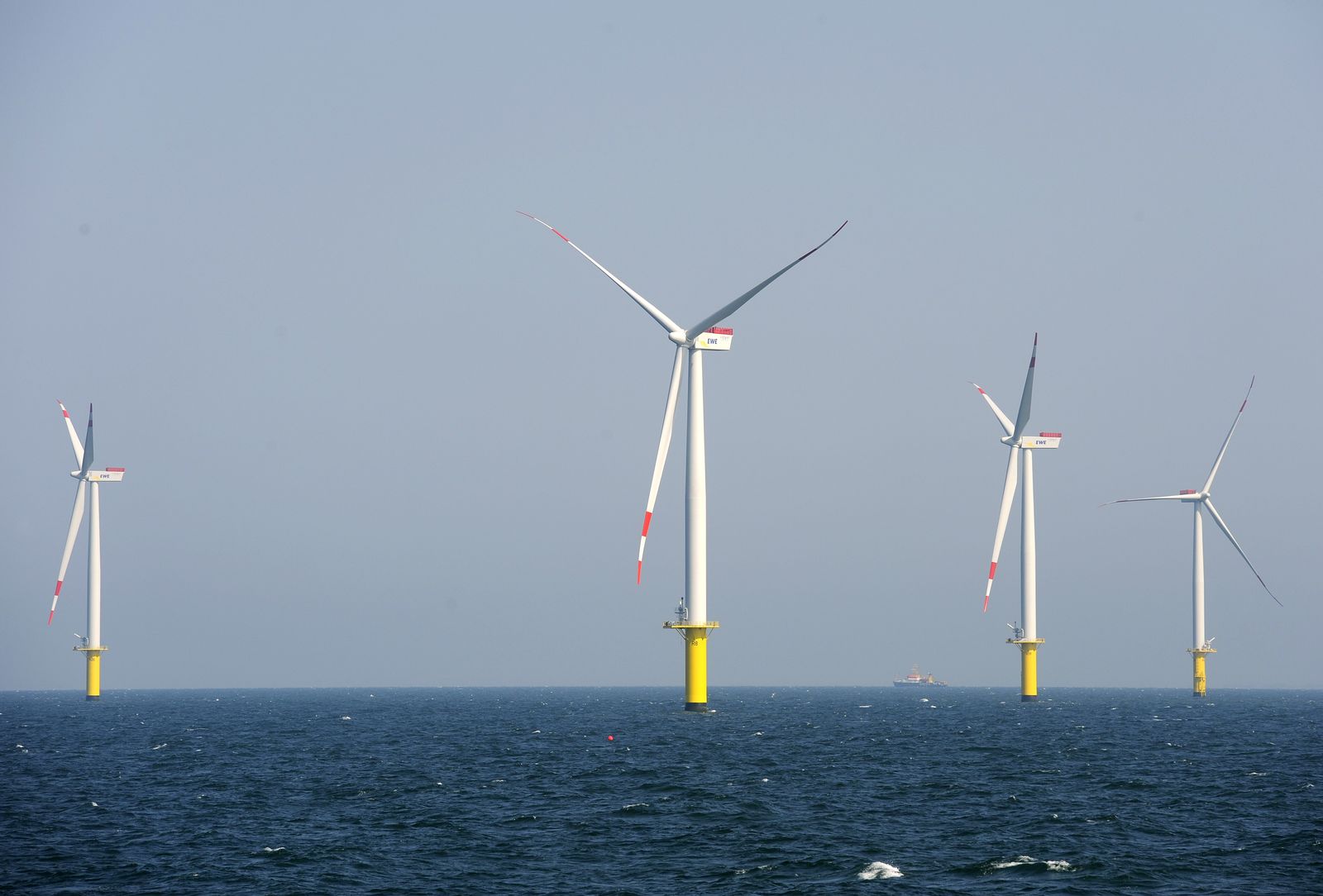 Riffgat was expected to become a milestone of the federal government's shift away from nuclear power and toward green energy, providing clean electricity to 120,000 households.