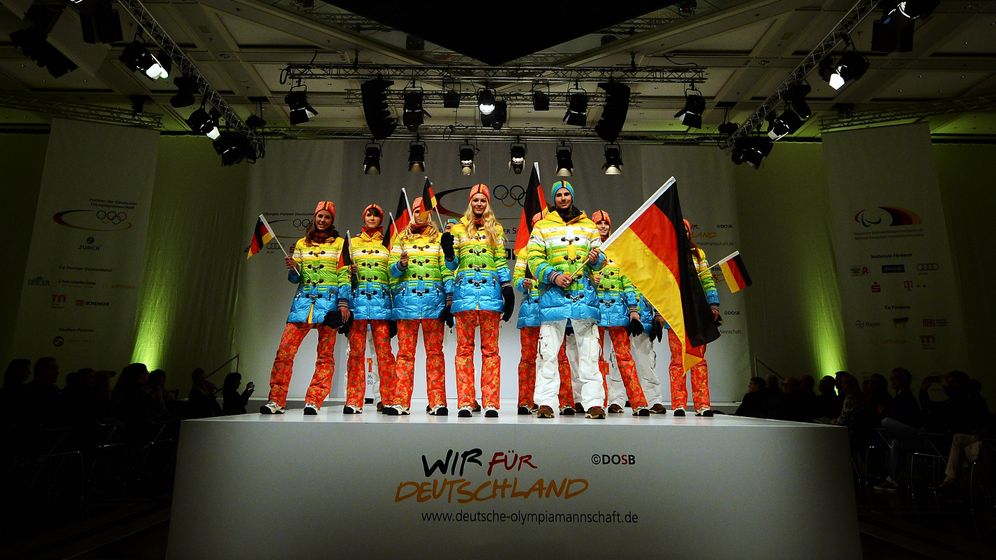 On Tuesday, Germany premiered the colorful uniforms for its Sochi Winter Olympics team with a runway show in Düsseldorf. The show has prompted reaction in Germany not only because of its bold design, but because many people are reading it as a silent form of protest against Russia's anti-gay laws.

The uniforms, which German Olympic skier Daniel Bohnacker described as "trendy," consist of a blue, white, yellow and green jacket -- paired with white pants for male athletes, and bright red and orange pants for female athletes. The teams' hats have a stripe reminiscent of the German flag set in bright blue and red color schemes. The overall look is puffy and bright, or, as German daily Die Tageszeitung described it, "a cross between a pot-bellied pig and a parrot."

Homage to 1972 or Political Statement?

The uniforms were created by German designer Willy Bogner, in cooperation with Adidas and the shoe company Sioux. Bogner claims they were an homage to the aesthetics of the 1972 Munich Summer Games and said he wanted to create a "celebratory design, inspired by the great atmosphere of the times." It conveniently comes in the wake of Munich's announcement that it will bid for the 2022 Winter Olympics, which, if it is successful, would make it the first city ever to have hosted both the winter and summer games.

But other commentators have seen a more explicitly political message in the uniforms. On Twitter, German users interpreted the uniforms "as a rainbow pattern" and as a "clear political statement." "Looks great, like a gay and lesbian pride parade," wrote one user. "Extremely hideous -- but a well-intentioned move supporting the rights of gays and lesbians," wrote another. The official description, which claims the outfits "were created using colors and materials specially tailored to the conditions in Sochi" seemed to, in ambiguous fashion, support that interpretation.

The past several months have seen an outpouring of international outrage about Russia's recent law banning "propaganda of non-traditional sexual relations" targeted at minors. The anti-gay law has been used to justify crackdowns on gay rights groups and gay pride parades, and has been seen as a contributing factor to anti-gay violence in Russia. It has also sparked concerns that Russian authorities could arrest gay athletes and visitors, and prompted moves to boycott the Olympics and, according to one petition, relocate them to Vancouver at the last minute.

A number of athletes have showed their support for gay rights in the run-up to the games. Swedish high jumper Emma Green Tregaro painted her fingernails rainbow colors in protest at the World Championships in Athletics in Moscow earlier this year. At the same event, two female Russian athletes, Kseniya Ryzhova and Tatyana Firova, kissed on the podium, a move that was interpreted as a defiance of the country's anti-gay rules. This week, American skier Bode Miller denounced the law as "ignorant."

'The Uniforms Are Not in Protest'

The German Olympic Sports Confederation (DOSB), however, disputes any political message that could be read into the uniforms. The DOSB spokesperson, Christian Klaue, told Die Tageszeitung that "the uniforms are not a protest," and said that the designs had been finalized before the Russia protests had even begun. Michael Vesper, general director of the DOSB, said, "This is just a fashionable jacket."

On an aesthetic level, the uniforms haven't been nearly as warmly received as on a political one. Although Germany's Olympic athletes have spoken out in support of them -- snowboarder Konstantin Schad told the daily Die Welt "they look impressive" -- the reaction on Twitter and elsewhere has been mostly negative. One Twitter user described it as a misguided homage to Apple's new iOS7 operating system, while Die Tageszeitung was more harsh: "If this had been meant as a political protest, then it would have been okay, but if it's just a 'fashionable jacket,' and on top of that, a butt-ugly one?"